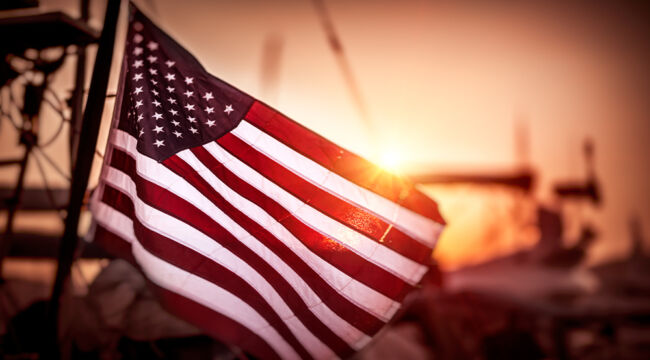 Contrary to Mr. Khrushchev’s boast decades prior, the United States had buried the Soviet Union.

Its forces had just trounced the world’s fourth-largest army — Iraq’s — within weeks.

America bestrode the world like a new colossus… and put all potential rivals in its shade.

Its armies bossed the four corners of the globe. Its fleets commanded the Seven Seas.

“The lesson of Desert Storm is, don’t fight with the United States without a nuclear weapon.”

It was the Pax Americana… the “end of history.”

Yet the gods are a jealous lot. They are hot to put down any mortal who has outgrown its britches.

Hubris hey will not abide…

The Worst Thing the Russians Ever Did To America

As he sneered — with a sort of purring relish — “We are going to do the worst thing we can do to you.”

Which was what precisely?

“We are going to take your enemy away from you.”

We fear he was correct.

A superpower needs an enemy as the policeman needs criminals… as the psychiatrist needs madmen… as the Church needs the devil.

Absent an enemy it loses its direction. Its vigor. Its élan vital.

It flounders, adrift, aimless and rudderless.

Between world wars, berserker Winston Churchill lamented “the bland skies of peace” that stretched above Earth.

Those same bland skies of peace overhung Earth at the Cold War’s conclusion.

America has had another go at Iraq — to liberate it from its own ruler and introduce it to Thomas Jefferson.

The result may represent its greatest foreign policy blunder yet — greater even than Vietnam.

And if Afghanistan is the graveyard of empires… the flags are coming down to half-mast… and the pallbearers are loading America’s empire into the hearse.

“You Americans have the watches,” says the Taliban. “But we have the time.”

And they do — have the time.

Americans are a restless, fitful people. We are eternally on the jump, forever hunting the next opportunity, perpetually peeking over the next hill.

That is, Americans are poor imperialists. We simply lack the requisite patience.

We have the watches, yes. But not the time.

But the once modest American Republic took up the hunt at the end of the 19th century.

It found its first monster in fiendish Spain…

Americans remembered the Maine. And forgot their Adams.

They have been forgetting their Adams ever since…

America has gone buccaneering around the globe, chasing down monsters during WWI, WWII, Korea, Vietnam, Iraq (twice) and Afghanistan.

For every one it scotched, another rose in its place. Hitler took over from the Kaiser. Stalin from Hitler. Osama bin Laden from Stalin.

Perhaps Chairman Xi will take over from Osama bin Laden?

We do not know. But if not him, we hazard another monster will. There is always another. And another.

What of American democracy and capitalism — the world’s envy three decades prior?

The Glory of American Democracy

American cities have been scenes of riot, of mayhem, of chaos. Statues of old heroes are down.

The nation’s founding myths are called into contempt and ridicule.

Millions and millions believe the recent presidential election was rigged and thieved, fraudulent and illegitimate.

Are they right? Are they wrong?

We refuse to wade into the bog. We take no official stance.

Yet if masses of American voters no longer trust the electoral process… what does it speak for American democracy?

Is this the alabaster city shining on the hill, glistening in the mists? Is this the model the world would mimic?

Is this the cause American soldiers have killed and died for?

As an American patriot in whose veins course the reddest blood, we hope it is not. Yet we begin to harbor grave doubts.

China has ventured so far as to label American democracy a “joke.” But few appreciate the jest.

The virus has reduced American capitalism to a sad, sad caricature.

But scroll the calendar backward, before the pandemic. The economy appeared healthy enough on the surface.

But if you scratched the paint… and looked deeper… you would find:

Gutted industries, stagnating growth, flat wages and a stock market that is captive of the central bank.

The entire system, meantime, is rotten through with unpayable debt — some $80 trillion and running.

It is not sustainable.

When did the American economy go wrong? And why?

Our own Charles Hugh Smith gives his answer:

In broad-brush, the post-World War II era ended around 1970. The legitimate prosperity of 1946-1970 was based on cheap oil controlled by the U.S. and the hegemony of the U.S. dollar. Everything else was merely decoration.

The Original Sin to hard-money advocates was America’s abandonment of the gold standard in 1971, but this was the only way to maintain hegemony. Maintaining the reserve currency is tricky, as the nation issuing the reserve currency has to supply the global economy with enough of the currency to grease commerce and stock central bank reserves around the world.

As the global economy expanded, the only way the U.S. could send enough dollars overseas was to run trade deficits, which in a gold standard meant the gold reserves would go to zero as trading partners holding dollars would exchange the currency for gold.

So the choice was: give up the reserve currency and the hegemony of the U.S. dollar by jacking up the dollar’s value so high that imports would collapse, or accept that hegemony was no longer compatible with the gold standard. It wasn’t a difficult decision: who would give up global hegemony, and for what?…

The elites have cannibalized the system so thoroughly that there’s nothing left to steal, exploit or cannibalize. The hyper-centralized global money control has run out of rope as the cheap oil is gone, debts have ballooned to the point there is no way they’ll ever be paid down, and the only thing staving off collapse is money-printing, which holds the seeds of its own demise.

Charles tells a woeful tale. Yet we believe there is good, hard sense in it. It is a competent autopsy.

“Empires have a logic of their own,” Bill Bonner and our intrepid leader Addison Wiggin wrote in Empire of Debt, concluding:

It seems so. But if the American empire is ending in grief, we hope for a quiet grief, a whimpering grief — not a banging grief.

Meantime, the gods watch the unfolding spectacle… munching popcorn… as the will of Zeus moves toward its ultimate end.