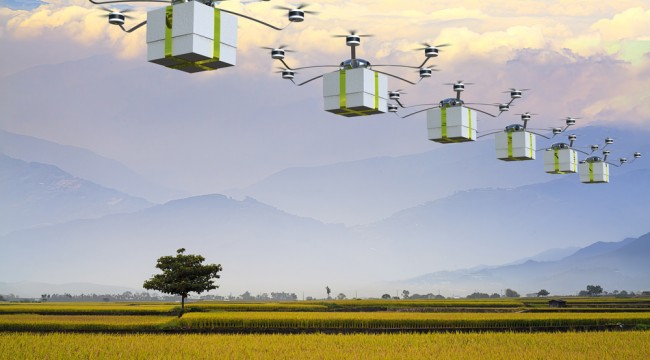 The $400 Billion Industry Set for Takeoff

There are plenty of uses for persistent, low-cost, self-guided drones in the sky. The potential uses for these friendly flying machines for individuals, businesses and governments are vast, and we’ll see them applied in ways we won’t necessarily see coming. We’re already using them, such as to remotely check pipelines and nuclear power plants, as Japan did after the earthquake and tsunami.

Another recent example is the use of drones for protecting populations of endangered animals. In Africa, drones are watching for poachers looking to illegally take endangered elephants, rhinos and other big game. In agriculture, unmanned aerial vehicles (UAVs) will be used to monitor fields and herds. And really dangerous jobs like crop dusting will eventually be taken over by drones, something that’s already happened in places like Japan.

Meteorologists will keep a better eye on dangerous weather systems, something people who live in the path of hurricanes and tornadoes will appreciate. We’ll also be able to detect the outbreak of forest fires earlier, improving our odds of stopping them before they grow too large.

The private nondefense market has received some regulatory clearance for testing drones in U.S. airspace. The FAA has released the following six sites where commercial drones will be tested next year and into 2015. 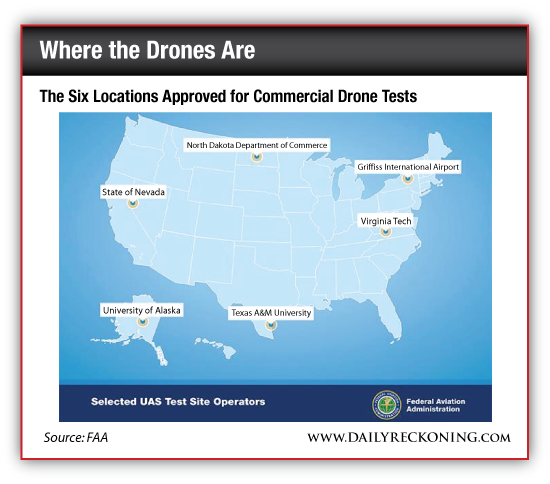 Once potential UAV operators know how they will be allowed to use the flying robots, I expect there will be a rush to fly them. Within a few years, there will be thousands in the air. The FAA expects 7,500 by 2018, but really, it’s anybody’s guess at this point. The number could be far larger.

We’re already seeing some early signs of this technology metaphorically taking off. Amazon recently unveiled its own idea about how to use drones. The company is exploring the use of drones to deliver small packages to addresses a short distance from its warehouses. It even has flying prototypes — and Amazon CEO Jeff Bezos thinks this could be a reality in five years. Order an item and it’s flown to your door in less than an hour by a small helicopter. Amazon is probably thinking near-instant gratification will be good for sales.

Amazon’s announcement caused quite a stir in the news. I think the timing was a crafty way for Bezos to raise his company’s profile just in time to coincide with the holiday shopping season, but Amazon already deploys an advanced, automated environment in its distribution centers. They’re very comfortable using the latest in technology and pushing the envelope.

Flying robots taking care of the last link in the chain — customer delivery — is a logical next step for Amazon, but they aren’t the only company thinking along these lines. UPS and FedEx are also working on UAV delivery ideas. A delivery truck could pull into your neighborhood and open up and a swarm of flying delivery robots fly out to every address with a package. One stop, multiple packages.

This market is going to be big. One group of analysts believes that spending on UAVs will fly to $400 billion in the next few years. Other analysts have different estimates, but the consensus is clear: This is going to be a big deal. UAVs are a tech trend investors shouldn’t ignore.

P.S. Some research just slid across my desk. I jumped right out of my chair after reading it. I bet you’ll have the same reaction, too. Inside is compelling evidence direct from an eight-year veteran of Discover magazine. He claims this next decade could be the richest of your life — and it’s because of breakthroughs just like these UAV applications. In today’s Daily Reckoning email edition, I gave readers a chance to discover this story first-hand, and included a unique profit opportunity to boot. If you didn’t get it, you might have missed out. To make sure you never miss another great story or investment opportunity like this, sign up for the FREE Daily Reckoning email edition, right here.