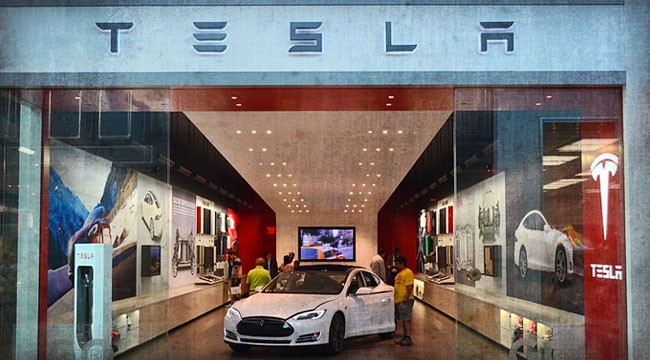 The trouble with the money printing madness in the Eccles Building is that it generates huge deformations, misallocations and speculative excesses in the financial markets.

Eventually these bubbles splatter, as they have twice this century. The resulting carnage, needless to say, is not small. Combined financial and real estate asset markdowns totaled about $7 trillion after the dotcom bust and $15 trillion during the 2008-2009 financial crisis.

Yes, the Fed has managed to reflate this cheap money bubble for the third time now. But the certainty that it will splatter once again is not the issue at hand. What gets lost in the serial bubble-making process of modern central banking is that vast real resources — labor, capital and materials — are misallocated owing to mispricing of stock, bonds and real estate during the bubble inflation phase.

During the bust phase, of course, these excesses are written-down on financial statements and often liquidated entirely on an operational basis. But that’s just the problem. These bust-phase corrections amount to deadweight losses to the economy — a permanent setback to growth and societal prosperity.

The Wall Street casino is now festooned with giant deadweight losses waiting to happen. But perhaps none is more egregious than Tesla — a crony capitalist con job that has long been insolvent, and has survived only by dint of prodigious taxpayer subsidies and billions of free money from the Fed’s Wall Street casino.

Not surprisingly, the speculative mania on Wall Street has reached such absurd lengths that Tesla is being heralded and valued as the second coming of Apple. And its circus barker CEO, Elon Musk, is touted as the next Henry Ford.

Indeed, so raptured were the day traders and gamblers that in the short span of 33 months between early 2012 and September 2014 they ramped up Tesla’s market cap from $2.5 billion to a peak of $35 billion.

That’s a 14-fold return in virtually no time. Not due, mind you, to the invention of a revolutionary new product like the iPad. Instead, we’re talking about 4,600 pounds of sheet metal, plastic, rubber and glass equipped with an electric battery power pack that has been around for decades, and which is not remotely economic without deep government subsidies.

Beyond that, the various Tesla models currently on the market carry price tags of $75,000 to more than $100,000. So they are essentially vanity toys for the wealthy — a form of conspicuous consumption for the “all things green” crowd. 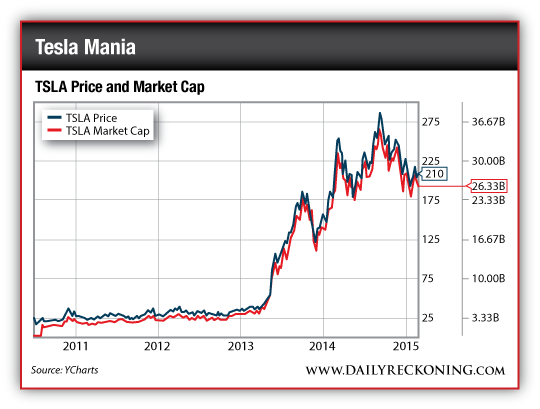 Notwithstanding all the hype on Wall Street, there was nothing remotely evident in its financials that justified Tesla’s $35 billion peak market cap. Net sales for the last 12-month (LTM) period that ended in September amounted to $2.9 billion.

That means that speculators were putting a Silicon Valley-style multiple of 12 times sales on a 100-year-old industrial product. One sold by a fly-by-night company distinguished from its auto company peers, which trade at 0.5 times sales, only by marketing hype. That, and a high-cost power plant that could be made by any of two dozen global car companies if there was actually a mass market demand for it.

Needless to say, Tesla’s meager LTM sales were not accompanied by any sign of profits or positive cash flow. September’s LTM net income clocked in at negative $200 million, and operating cash flow of $150 million was dwarfed by capex of $700 million.

Unless you are imbibing in the hallucination-inducing Kool-Aid dispensed by Goldman Sachs, which took this red-ink machine public in 2009 and has milked it via underwritings, advisories and early-stage investments for billions, Tesla’s valuation was patently absurd.

Yet the gamblers piled-in based on the utterly improbable assumption that oil would remain at $115 per barrel for ever; that a mass market for electric battery autos would soon develop; and that none of the powerhouse marketing and engineering companies like BMW, Toyota or even Ford would contest Tesla for market share at standard industry profit margins.

The truth is, there is massive excess capacity in the global auto industry owing to government subsidies and bailouts and to union protectionism that keep uncompetitive capacity alive; and that chronic condition is now especially pronounced due to the wildly soaring growth of unused production capacity in China. This means that the global economy is literally saturated with expert resources for auto engineering, design, assembly, machining and component supply.

Consequently, if a mass market were to develop for battery powered vehicles these incumbent industry resources would literally swarm into Tesla’s backyard. So doing, they would eventually drive margins to normal levels, sending Elon Musk’s razzmatazz up in the same cloud of smoke that has afflicted many of his vehicles.

There is no reason to think that any long-term mass-market player in the auto industry could beat Toyota’s sustained performance metrics. In the most recent period, its net profits amounted to 7.5% of sales, and it traded at 11 times LTM net income.

Even if you take as granted the far-fetched notion that in a world of $2-3 per gallon gasoline — which is likely here for a sustained duration — that a mass market will develop for electric battery vehicles, Tesla would still need upwards of $50 billion of sales at Toyota profit rates and valuation multiples to justify last September’s peak market cap.

Tesla’ calendar year 2014 sales totaled $3.2 billion. That means that you would need to bet on a 16-fold gain in sales over the next few years. And that means that Tesla’s ragtag startup manufacturing operation would need to achieve levels of efficiency, quality and reliability that has taken Toyota 60 years to perfect.

Yet take one hard look at Tesla’s historical financials and it is blindingly evident that there is no reason for such an assumption whatsoever.

In fact, Tesla is not a Toyota in the making. It is a Wall Street scam in plain sight. It has been a public filer for seven years now, and here are the horrific figures from its financial statements.

Since 2007, it has booked cumulative sales of just $6.1 billion. That ain’t much in autoland; it amounts to about one week of sales by Toyota and two weeks by Ford. Its cumulative bottom line has been a net loss of $1.4 billion, and the losses are not shrinking — having totaled nearly $300 million for 2014 alone.

More significantly, during its entire seven years as a public filer, Tesla has failed to generate any net operating cash flow (OCF) at all. In fact, it has posted red ink of $500 million on the OCF line. During the same seven-year span ending in Q4 of 2014, its capital expenditures amounted to a cumulative $1.8 billion.

Go figure. Combining OCF and capex, you get a balance sheet hemorrhaging nearly $2.4 billion. The real question, therefore, is not why Tesla was worth $35 billion, but why it wasn’t bankrupt long ago? The answer is that it was and should be now.

Tesla would not have even made it to its Goldman-led IPO without a $500 million bailout by Uncle Sam. That the hard-pressed taxpayers of America were called upon to underwrite a vanity toy for the wealthy — and one peddled by a serial milker of the public teat — is surely a measure of how deep crony capitalist corruption has penetrated into the business system of America.

But even these egregious windfalls do not begin to compare with the gifts showered on Elon Musk by the money printers in the Eccles building. Tesla has stayed alive only because it has been able to raise billions of convertible debt in the Wall Street casino at yields which are the next best thing to free money.

In short, it has been burning massive dollops of cash for years and replenishing itself periodically in capital markets which are rife with momo speculators flying high on cheap carry trades and the Fed’s buy-the-dip safety net.

That’s right. This company is a red ink spewing rank speculation, but the money printers have enabled it to raise cash that costs virtually nothing on an after tax basis. Call it free money for the Tesla bonfire of the vanities.

True enough, these miniscule interest rates were attached to convertible bonds — so supposedly, the “upside” justified giving a proven red-ink machine free money. Yes, and the strike price on those converts implied a market cap of about $50 billion!

In truth, Tesla’s true losses are even greater than its accounting statements suggest. For instance, it has booked upward of $500 million of revenue and profits owing to zero emissions vehicle (ZEV) credits. The latter were invented by Al Gore after he finished inventing the internet, and amount to nothing more than bottled air — clean or not.

Also, Tesla’s affluent customers pocket about $10,000 per vehicle of Federal and state tax credits, meaning that taxpayers have fronted another $500 million or so to stimulate Tesla sales.

Finally, Tesla’s marketing machine has even converted itself into a repo man for the wealthy. That is, Tesla guarantees a large share of its customers that it will buy back their vehicles at no loss after three years.

How does it possibly make a profit deploying this blatant free rent-a-car gimmick?

Ask its accountants. In their wisdom and clairvoyance, they have undoubtedly assumed that the residual value of these vehicles will be levitated by the same juice which fuels Tesla’s stock price.

Yes, Tesla is a bonfire of the vanities.

In due course, the bubble will collapse and billions will have been wasted. Much of it with taxpayer money. On things like its imaginary gigafactory in Nevada, no less.