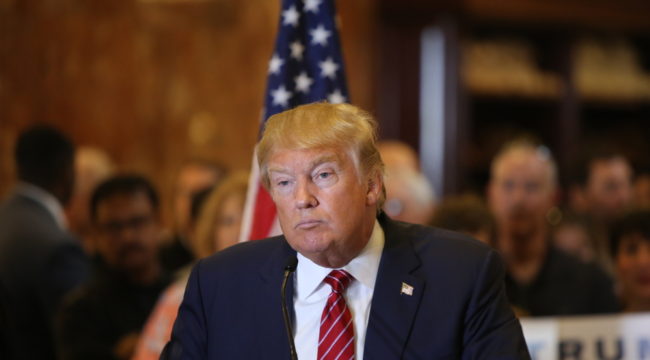 Tax Lessons for the Donald

[Urgent Note: The nation’s future hangs in the balance as Trump approaches his first 100 days. That’s why I’m on a mission to send my new book TRUMPED! A Nation on the Brink of Ruin… and How to Bring It Backto every American who responds, absolutely free. Click here for more details.]

Hang onto your hat. The Donald is fixing to drive the Imperial City deeper into the debt Swamp than ever before.

Whatever he has been doing for the past 97 days, it obviously didn’t involve learning a single thing about the nation’s dire fiscal plight or the procedural landmines that infest the budget process at every turn.

So according to the Wall Street Journal he has ordered his advisors to jettison even the pretense of “payfors” and go for a near abolition of the corporate income tax — the deficit be damned:

President Donald Trump has ordered White House aides to accelerate efforts to draft a tax planslashing the corporate rate to 15% and prioritizing cuts in tax rates over an attempt to not increase the deficit, according to a person familiar with the directive.

During a meeting inside the Oval Office last week, Mr. Trump told staff he wants a massive tax cut to sell to the American people, the person said. It was less important to him if the plan loses revenue. Mr. Trump told his team to “get it done,” in time to release a plan by Wednesday (today).

Mr. Trump promised from the campaign trail to cut corporate rates to 15% from 35%. There likely aren’t enough business tax breaks that could be repealed to offset the fiscal cost, meaning such a move would increase budget deficits. Roughly, each percentage-point cut in the tax rate lowers federal revenue by $100 billion over a decade, so a 20-point cut would cost the government $2 trillion, according to the congressional Joint Committee on Taxation.

To be sure, I’m all for a 15% corporate tax rate, and zero would actually be even better.

But how in the world does the Donald think he doesn’t have to pay for the revenue loss with entitlement reforms or even by draining the Deep End of the Swamp at the Pentagon by cutting, not increasing, its already swollen budget?

And besides that, apparently no one has told him that the deficit-conscious Freedom Caucus wing of the Republican House will never vote for $2 trillion in deficit-financed tax cuts. Nor will the moderate Tuesday Group side of the party support a huge corporate rate cut without commensurate reductions on the personal income tax side that would cost another $3 trillion or so over a decade.

At the same time, there is no possibility of a “bipartisan” tax bill, either. The Donald can pretend to “pivot” all he wants, but it will be to no avail because Democrats become deficit hawks whenever there is a Republican in the White House — especially one that wishes to cut corporate rates and those for the richest taxpayers.

And in that respect, let’s again recall why there will never be significant Democrat votes for a traditional GOP “tax cut.”

The Dems are the party of redistribution. Their rank and file voters overwhelmingly are among taxpayers with household adjusted gross incomes of $75,000 or below.

Another 33 million paid less than $25 per week.

In fact, these households accounted for 74% of all Federal tax filers, but paid only $175 billion of income taxes or just 13% of the total. For the average household among these 110 million filers, a 15% income tax cut would amount to barely $1 per day of savings.

By contrast, the top 4% of households (with adjusted gross incomes above $200,000) paid $802 billion in Federal income taxes or nearly 5X what the bottom 74% paid. Altogether, these 6.2 million tax filers accounted for 58% of all Federal individual income taxes and paid $129,000 in taxes on average.

Moreover, the top 16% of filers (24 million) accounted for $1.1 trillion of income tax payments or 80% of the $1.38 trillion paid in 2014. So no matter how you slice it, big personal income tax cuts can be demagogued until the cows come home by the Dems because the truth is the income tax has morphed into a tax almost exclusively borne by the wealthy.

My point, however, is not to bemoan the obvious extreme “progressivity” of the Federal income tax. That’s a policy scandal for another day.

My purpose here is to explain its political consequence and the reason that a” bipartisan” tax bill is now a legislative impossibility.

Beyond the legislative politics, personal rate cuts are essentially irrelevant in this day and age of Bubble Finance. That is, whatever their philosophical shortcomings as a matter of fairness and equity, current income tax rates are not a significant barrier to economic activity, and therefore rate cuts will generate only modest incremental “growth” and supply side gains.

What is very different today compared to 1981 when I was White House Budget Director is that the madcap money printers at the Fed have caused such enormous inflation of financial asset prices that no entrepreneur is wanting for rewards for his or her efforts.

Almost any viable investment has paid off big time owing to the drastic expansion of valuation multiples and low rates of taxation on capital gains.

At the same time, such a huge share of the work force has been excused from the Federal income tax that little labor is being withheld from production on account of personal income tax rates, if any at all.

And with the tax code indexed for inflation since 1986, the old scourge of bracket creep  experienced by tens of millions of working households back then, is now long gone.

Likewise, owing to the Fed’s massive financial bubbles, there is virtually unlimited venture capital available in the U.S. economy today for any good idea that comes along — and endless numbers of bad ones, too.

At the end of the day, the Laffer Curve — meaning lower marginal tax rates produce much higher tax revenues — has essentially gone missing. Owing to the Fed’s systematic falsification of financial asset prices for three decades now, the overwhelming share of the $63 trillion gain in financial assets values in the U.S. since 1987 has been captured by the top 15% of households, which own most of the financial assets.

Lowering marginal tax rates a few points won’t give them any more incentive to produce.

To be sure, the current situation won’t last. The traumatic day of reckoning is coming when the current era of central bank driven Bubble Finance finally crashes for the last time. But in the interim, tax cuts are not going to pay for themselves in higher growth.

The way to address the real barrier to growth is to clean house at the Fed and get the burden of payroll taxation off 140 million wage and salary workers in the American economy.

By contrast, the Donald’s most recent tax plan will be DBA (dead before arrival) even sooner than the he reaches his vaunted 100 Day mark.

And, besides, it would be an absolute fiscal disaster if by some miracle it were actually enacted into law.