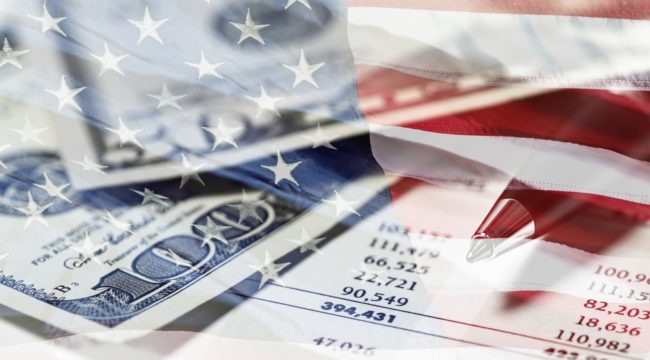 The Surprising History of Market Shocks

The Federal Reserve has unleashed Pavlov’s dogs upon Wall Street…

Investors buy in the expectation that the Federal Reserve will sally to the rescue whenever stocks take fright.

The buying spree lifts the market — even if the Fed had no intention of intervening.

The point is years of conditioning have trained investors to expect intervention.

And through their salivating stock purchases… they conduct their own intervention.

The Fed has conditioned them well.

Markets never transacted business in this fashion until the Fed enthroned itself savior after 2008.

Bad news was in fact bad news. And markets took the news at face value — badly.

That is the viewpoint in current circulation: Pre-2008 markets were acutely sensitive to quakes.

Because of the Fed, today’s are not.

But is it necessarily true?

We introduced you to James Altucher yesterday. James once ran a fascinating study…

He ransacked history from the beginning of WWII to the seismic events of Sept. 11, 2001.

His purpose: to study the impact of potentially systemic shocks on markets.

James identified 10 potential haymakers that could have flattened markets for the count.

The most conspicuous among them:

James recorded the S&P’s antics the day before the shock… the day after… and its panicked low the week following the event.

He then examined the S&P one week later, one month later and six months later.

“Each time, the market has absorbed the shock and moved past the event.”

When the Germans invaded Poland to lift the curtain on WWII — not the average day, and by a long chalk at that — the market acted like it was just another day.

The S&P slipped a bit, and found a shallow bottom just days after.

It then settled on higher footings for the next six months, according to James… as if Herr Hitler’s soldaten were mere tourists taking the pleasant sights of Europe.

Why weren’t markets in headlong retreat along with Western Europe? Didn’t they know?

The Fed wasn’t in the business of propping stocks in those days. So the answer must lie elsewhere.

The S&P went lower into January ’42. But it rediscovered its fighting elan shortly thereafter.

And the S&P opened every year higher than the last until 1946.

Of course, comes the objection: Stocks naturally rose on the prospects of ultimate victory.

Yes, but the S&P had stabilized in January ‘42 as U.S forces were getting licked by the Japanese.

American fortunes only changed after the Battle of Midway in June ’42… after the S&P had already turned. 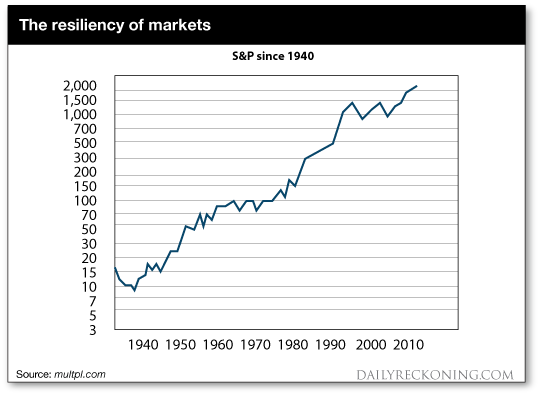 What of the Cuban missile crisis?

The world was never closer to the brink. But after a brief stagger, the S&P went trotting ahead, merry as a grig.

“What is most interesting is the ferocity with which the market rallied in only a few months,” said James.

Apparently, the specter of nuclear oblivion — a sword of Damocles hovering over markets for the next 30 years — was never the bugaboo many feared.

The party started in 1962 and continued for the next seven years, resulting in the biggest bull market in history until the 1990s.

The date itself makes an icicle of our spine.

Markets were closed one full week after the horrors. And traded down heavily upon opening.

And just six months afterward, the S&P was 73 points higher than its Sept. 10 closing.

Many suspected the silent hand of the Plunge Protection Team when stocks miraculously recovered once the market reopened.

But it doesn’t explain the next six months — a period during which Enron collapsed, incidentally.

James’ study ended before 2008, so the financial crisis didn’t come under his bifocals.

We know of course the S&P has trended in an upward channel since 2010 — more or less.

It is indeed a new world… brave or not.

But the long sweep of history indicates markets bend in a resilient arc.

And the shocks prove less shocking than feared, if James is right:

The nation has nevertheless undergone shocks to the system that we have survived, and will continue to survive.

We can’t challenge the first point. We’re consoled by the second.

But nature has not gifted us with an optimistic spirit.

And given the size of the current bubble, we can’t put away the suspicion that the system might not survive the next shock.