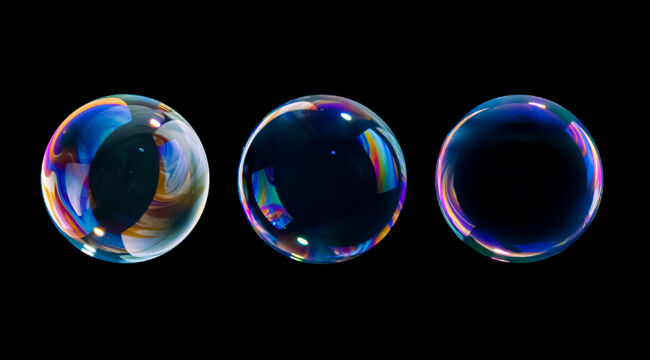 Stocks stabilized today after yesterday’s bloodbath, the market’s worst day in over two years. But if you’re tempted to “buy the dip,” I’d think twice. The worst may be yet to come. Here’s a little tip:

A colleague has informed me that institutional traders — not mom and pop retail investors — have recently taken out over $8 billion in “crash protection.” That’s a record high.

The last time we saw such a surge in crash protection was just prior to the collapse of Lehman Bros. in 2008. Again, these guys are the “smart money.” They must know something the average investor doesn’t.

In broader terms, could we be looking at the end of a “superbubble”?

Jeremy Grantham is one of the most successful and best-known investment advisers ever. He believes a superbubble is ready to burst in U.S. stock, bond and real estate markets.

Grantham believes a superbubble is different from a normal market bubble. Regular bubbles come and go about every 10 years or so. They pop and cause damage, but markets soon recover and life goes on.

Superbubbles are different. In the first place, they’re rare. Grantham says that the U.S. has had only three superbubbles in the past 100 years — the 1929 stock market crash, the 1972 stock crash followed by the oil shock and inflation and the 2000 dot-com bubble when the Nasdaq fell over 80%.

The first phase of a bubble bursting (which began in November 2021) is followed by a bear market rally (which occurred July–August 2022) before the ultimate bear market begins (with valuations falling 60% or more).

Previous superbubbles saw a much worse subsequent economic outlook if they combined multiple asset classes: housing and stocks, as in Japan in 1989 or globally in 2006; or if they combined an inflation surge and rate shock with a stock bubble, as in 1973 in the U.S. and elsewhere.

The current superbubble features the most dangerous mix of these factors in modern times: All three major asset classes – housing, stocks and bonds – were critically historically overvalued at the end of last year. Now we are seeing an inflation surge and rate shock as in the early 1970s as well. And to make matters worse, we have a commodity and energy surge (as painfully seen in 1972 and in 2007) and these commodity shocks have always cast a long growth-suppressing shadow…

The current superbubble features an unprecedentedly dangerous mix of cross-asset overvaluation (with bonds, housing and stocks all critically overpriced and now rapidly losing momentum), commodity shock and Fed hawkishness. Each cycle is different and unique – but every historical parallel suggests that the worst is yet to come.

The higher the sigma, the more an event strays from normal. Unlike a normal bubble’s 2-sigma, Grantham places superbubbles at 2.5–3 sigma — 2.5–3 standard deviations from normal.

In other words, they’re very rare. Well, if that’s rare, how rare is a 7-sigma event?

I was senior counsel for Long Term Capital Management, LTCM, the hedge fund that collapsed in 1998 after derivatives trading strategies went catastrophically wrong.

After the collapse and subsequent rescue, I chatted with one of the senior LTCM partners about what went wrong. I was familiar with markets and trading strategies, but I was not expert in the highly technical applied mathematics that the management committee used to devise its strategies.

Even nonstatisticians would understand that a 7-sigma event sounds rare. But I wanted to know how rare.

I consulted some technical sources and discovered that for a daily occurrence, a 7-sigma event would happen less than once every billion years, or less than five times in the history of the planet Earth!

The Beginning of a Long Odyssey

I knew that my quant partner had the math right. But it was obvious to me his model must be wrong. Extreme events had occurred in markets in 1987, 1994 and then 1998. They happened regularly.

Any model that tried to explain an event as something that happened every billion years could not possibly be the right model for understanding the dynamics of something that occurred every few years or so.

I then set out on a 10-year odyssey to discover the proper analytic method for understanding risk in capital markets. I studied physics, network theory, graph theory, complexity theory, applied mathematics and many other fields that connected in various ways to the actual workings of capital markets.

Finally I received invitations to teach and consult at some of the leading universities and laboratories involved in complexity theory including Johns Hopkins University, Northwestern University, the Los Alamos National Laboratory and the Applied Physics Laboratory.

Toward a New Paradigm

In these venues, I continually promoted the idea of interdisciplinary efforts to solve the deepest mysteries of capital markets. I knew that no one field had all the answers, but a combination of expertise from various fields might produce insights and methods that could advance the art of financial risk management.

I proposed that a team consisting of physicists, computer modelers, applied mathematicians, lawyers, economists, sociologists and others could refine the theoretical models that I and others had developed and could suggest a program of empirical research and experimentation to validate the theory.

Whenever prominent economists were confronted with a 7-sigma market event they dismissed it as an “outlier” and tweaked their models slightly without ever recognizing the fact that their models didn’t work at all.

Physicists had a different problem. They had spent their careers learning theoretical physics and did not necessarily know more about capital markets than the everyday investor worried about her 401(k) plan.

One Foot in the Physics Lab, the Other on Wall Street

I took this as a great compliment. I knew that a fully developed and tested theory of financial complexity would take decades to create with contributions from many researchers, but I was gratified to know that I was making a contribution to the field with one foot in the physics lab and one foot planted firmly on Wall Street.

My work on this project, and that of others, continues to this day.

Now, according to Jeremy Grantham, we’re looking at a 2.5–3-sigma event. While still extremely rare, it’s considerably more likely than a 7-sigma event.

The parallels between previous superbubbles and today’s superbubble are downright ominous.

And the others didn’t end well.