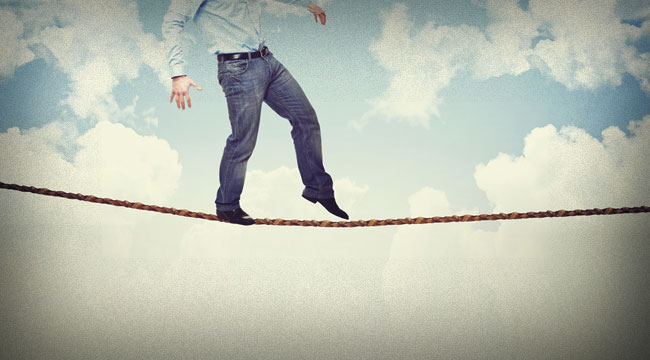 The more you try to de-risk a system, the more accident-prone it becomes, and the more damaging the accidents are. The economist Hyman Minsky described this aspect of the financial system by saying that stability breeds instability.

But Minsky’s insight does not merely describe stock market tendencies. It goes beyond that…as we are learning from the antics of Ben Bernanke and his central banking peers.

By using interest rates and monetary policy to try to prevent recessions, central bankers are making the world less safe and more likely to have a horrible accident. They are making the financial system more fragile — the point Nassim Taleb makes in his new book, Antifragile: Things That Gain From Disorder.

You might not believe that the world becomes more dangerous precisely because you’re trying to make it safer. But studies show that after the introduction of seat belts, the number of car accidents went up. Why? Well, people must have felt that because the belts made them safer, and made accidents more survivable, it was OK to take more risks, drive faster and otherwise abdicate responsibility for their own actions.

We’re not saying people get in the car and say, “OK, today I’m going to drive like an idiot.” Sometimes it looks that way, of course. But it’s a psychological phenomenon we’re talking about. If people are led to believe they are safer, they will quite naturally be less vigilant about risk.

The trouble is a sense of risk is a highly useful advantage in evolutionary terms. Risk tells you when something big is at stake and the quality of your actions and decisions matter. If you try to systematically eliminate risk from society — even if it’s out of good intentions — you aren’t helping people at all. You’re robbing them of a basic instinct that promotes their ability to look after themselves. You’re turning them into domesticated bipeds.

Besides, things like the circus would never exist if you completely de-risked society. A few weeks ago, your editor took a cab down to Docklands with Money for Life Letter editor Nick Hubble. Nick is a juggler. At heart, he’s the sort of person who’d like to join the circus, but he’s probably not a big enough freak to qualify. Instead of joining, he watches with a kind of envious pleasure. Last night, we tagged along.

It was a Cirque du Soleil show about the love life of insects. Cirque du Soleil was hatched from the mind of a French Canadian. As such, it has that weird, awkward charm of French-inspired popular entertainment. There are moments, with all the bright colors and dramatic lighting and live music, when you find yourself enchanted. You’re willing to suspend disbelief because you want to enter into a new, strange and vivid world.

There are other moments when you realize how absurd and comical the whole thing is. Any art that takes itself so seriously, while being so self-conscious, deserves to be ridiculed, or at least politely laughed at. Maybe this is the charm of the show, though. It’s always delicately poised between two possibilities: childlike wonder and buffoonery.

And to be fair, the circus is only playing at being art. It’s really more like stylized sport, or gymnastics with better costumes. And when it tries to be that, it exceeds all expectations!

There were grasshopper-like men bouncing 20 yards in the air and running up walls. There were tiny Chinese girls dressed as some kind of red ant, juggling things (including each other!) with their feet. There were contortionists, trapeze artists, artistic pole-dancers and an amazing young man who rode a unicycle on a slack line while pedaling with his hands.

You don’t learn how to ride a unicycle upside down on a slack line by avoiding risk in your life. You certainly don’t learn to juggle with your feet by avoiding risk. In fact, if you want to do anything, and if you want to live an extraordinary life (or at least attempt extraordinary things), you have to be willing to risk falling on your face. A few bruises and broken bones are valuable teaching experiences.

The trouble with today’s financial system is that the authorities are trying to de-risk it. By doing so, they’ve suckered everyone into behaving more recklessly. The system has become fragile, and investors are not planning for the long term. They’re engaging in high-risk, short-term behavior in order to maximize their current position.

These are all symptoms of a culture infected with the inflation virus. As monetary values become less stable, risk-taking behavior becomes more pervasive, without people necessarily knowing (or caring) that their behavior is high risk. It’s a circus full of drunken clowns, perched on a high wire, with no safety net below.

Our advice is to kick back, buy a bucket of popcorn and enjoy the show. That’s exactly what we did last night. Of course, you can do that only if you’re a spectator, which means having an investment strategy where you take a long-term view and do not have to worry about the day-to-day volatility of the market.

To close the week, then, is there salvation in eating popcorn while the world becomes a fabulous but fragile financial circus? Probably not. There are some things not even the free market can give you. Salvation is one of them. There is no options contract or pair trade that can deliver personal happiness and spiritual calm. For that, you’ll have to look elsewhere. In the meantime, we’ll keep an eye on the circus for you, and the reckoning will continue.