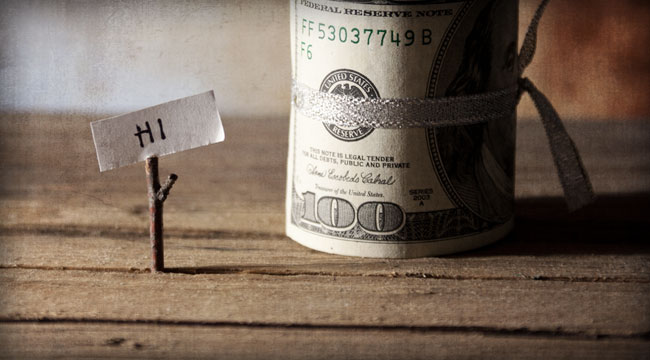 Cliff Asness, the co-founder and chief investment office of AQR Capital Management, calls it “the idiot strategy.” At Grant’s Spring Investment Conference in Manhattan, he explained it this way:

Asness uses the idiot strategy for a small portion of the assets under his care. Most people — at least those who care about the price they pay — would shy away from buying something that has gone up a lot. But it can work.

In fact, lots of weird things work in the stock market. For example, take the old “sell in May and go away” advice. It actually works, assuming you get back in the market on Nov. 1.

Here are the historical monthly returns for the S&P 500: 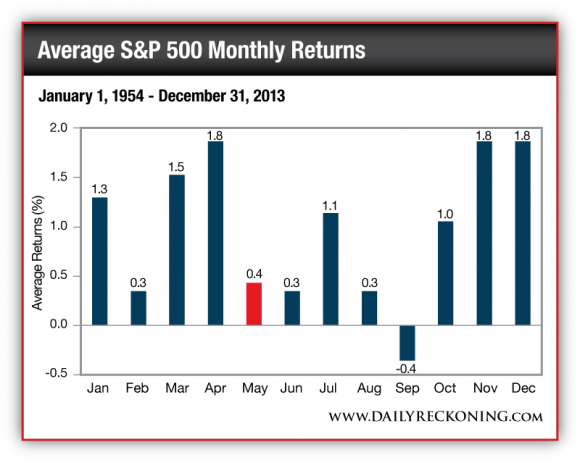 The strategy works because it avoids four of the five worst historical months in the market. Why this distribution should be this way is a mystery.

What’s really weird about this effect is that it even seems to work in other markets. Researchers Sven Bouman and Ben Jacobsen found it worked in 36 of the 37 countries they studied. In the U.K., they found the “sell in May” strategy worked as far back as 1694.

Stuff like this makes me think we really are living in the matrix and there is a glitch in the program.

The truth is markets can be wonderfully counterintuitive places. You hear all kinds of advice that sounds sensible. Then you run the numbers and find that you should do the opposite.

Take the idea that you want emerging market exposure because those economies are growing faster and, thus, you’ll earn better returns than if you stayed in, say, the old US of A.

First, it’s not true that emerging markets (China, Brazil, Russia, India, etc.) get higher returns than developed markets (U.S., U.K., Germany, Japan, etc.). In fact, looked at over the long view, the opposite is true.

These data are from Elroy Dimson, Paul Marsh and Mike Staunton, who put out a fascinating annual investment yearbook. 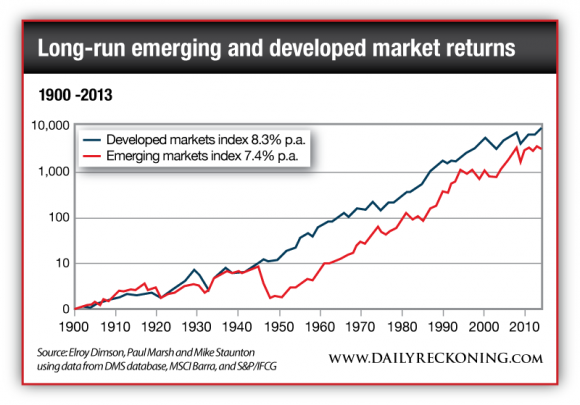 The above chart uses a GDP rule and counts only the richest countries as developed. (All the usual suspects — chiefly the U.S. and Western Europe, etc.) These markets did better overall than their emerging cousins.

If you think about it, it’s not hard to understand why. Russia’s stock market went to zero after the Bolsheviks took over in 1917. China’s markets went to zero in 1949 after the communist revolution. These are the big examples, but people forget how easy it is to put up a zero, or close to it, in an emerging market. (Romania went to zero. Poland went to zero. Hungary went to zero. There are others.)

When people use more recent indexes, they get great numbers. Take a look at one popular index, the MSCI Emerging Markets Index pictured below. 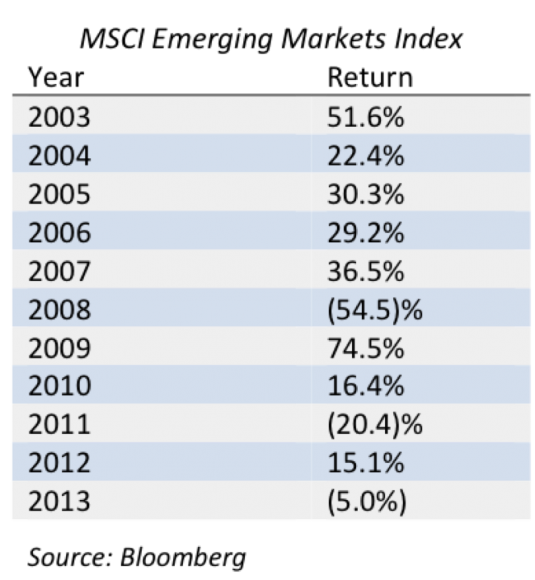 The numbers are deceiving as far as being anywhere predictive of what might happen next. If anything, they grossly overstate the potential of emerging markets. As Steve Bregman at Horizon Kinetics recently pointed out:

“In the case of Russia and China, the data can only go back two decades or so. Those are two major emerging markets. Furthermore, the initial data can be very misleading, because how did any of these companies come into the marketplace?

“The government owned everything. It basically auctioned off assets and had no idea at what prices to do so (or perhaps set the prices deliberately low so as to advantage those few buyers with the political and financing access to bid for the shares). The fact that investors earned a very high rate of return in the early years resulted from very unusual circumstances. And because the measurement period is so short, those unusual circumstances still weigh very heavily upon any index results.”

The other thing Bregman warns about is that emerging markets can be narrow. Meaning there aren’t that many listed companies, and one big company can distort the returns of that country’s index.

A great example is Telmex, which had an 8% weighting in the MSCI index at inception in 1998. Controlled by the government, Telmex had a price-earnings ratio of just 2. When the government changed its policies to favor investors, the stock went to a 12-14 times multiple. Telmex returned 50% annually for the first five years in the index. Thanks to the large weight Telmex had in the index, it made it seem as if the Mexican stock market was a great market.

But was it really? As Bregman asks, “Can one draw any reasonable conclusions about future Mexican returns from the fact that the Mexican stock market experienced a decade of extraordinary returns? Similar sorts of anomalies can be observed in other emerging markets. Emerging markets’ historical data should be used with extreme caution before drawing any conclusions about the risk and reward.”

So there you go.

Second, it turns out that the best returns come from investing in the slowest-growing economies.

Once again, I turn to Dimson et al., who write in their yearbook:

“Contrary to many people’s intuition, investing in the countries that have recently experienced the lowest economic growth leads to the highest returns — an annualized return of 28% compared with just under 14% for the highest GDP growth quintile.”

GDP might be a contrived and flawed measure, but it’s not completely useless. Dimson et al. show this holds pretty evenly as you move from slowest growing to highest growing. This next bar chart shows the data for emerging markets from 1976-2013. It shows returns by quintile from lowest GDP growth to highest GDP growth.

We have a personal experience here. We invested in Mongolia. The economy is growing by double-digit percentages. Yet pretty much everybody who has invested in Mongolia in the last couple of years has lost money. You’d been better off in Greece, which has been contracting but whose equity market has been among the world’s best.

When you think about, this kind of makes sense because it comes down to prices. The GDP data is backward looking. The market knew Greece was imploding well before the GDP figures came out. So asset prices adjusted and came way down. This laid a good seedbed for outstanding returns for investors getting in at that point.

Conversely, expectations were high in Mongolia, and when they slipped even just a little bit, the market prices reacted more violently. (Now, though, would seem a good time to stay in, as expectations are pretty low.)

Anyway, that’s my brain food for you today. Just remember the market is full of puzzles and counterintuitive insights. Don’t be quick to fall for your own prejudices about what makes stocks go.