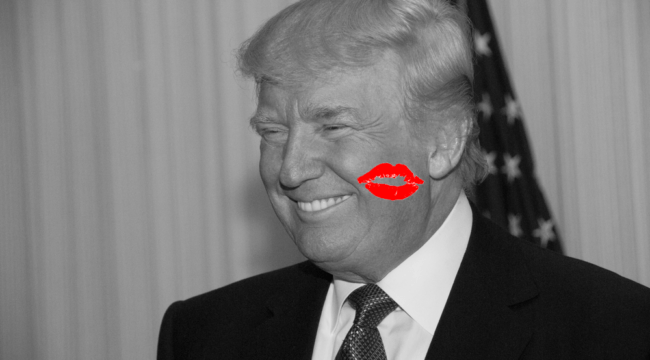 Why the Stock Market Gave Trump a Big Kiss…

What happened to the swarm of locusts… the frogs raining down from the sky… the thunderstorms of hail and fire?

That’s the “end of days” scenario we were told to expect should Trump win the presidency.

But the market slaughter never materialized.

So far, the stock market has given the idea of a Trump presidency a big kiss…

Bridgewater wasn’t alone in its dire prediction based on nothing…

Citigroup warned its clients the S&P 500 would fall immediately by 3% to 5% if Trump won.

Research firm Macroeconomic Advisers forecast that a Trump win would result in an 8% drop in U.S. stocks.

And the Brookings Institution projected a 10% to 15% plunge.

But reality so far has been much different…

Yes, there was a brief overnight manipulation as the high-frequency guys abused irrational fears.

The thought of a Trump White House saw Dow futures down more than 800 points in Wednesday’s pre-market trading.

But the Dow benchmark actually ended up closing higher for the day by more than 250 points. And it gained another 218 points on Thursday.

Why the big swing in sentiment?

As the uncertainty of the election result diminished, I assume investors took a deep breath and contemplated what a Trump presidency might really mean to the markets.

Apparently, they liked what they saw… at least right now.

Or maybe none of this was the relevant why—who knows.

How to Avoid Losing Your Shirt…

Look, I’m not saying the market won’t see big declines from here. It could. It also could not.

Take a look at this from Bloomberg:

“In the 22 elections going back to 1928, the S&P 500 has fallen 15 times the day after polls close, for an average loss of 1.8 percent. Stocks reversed course and moved higher over the next 12 months in nine of those instances.”

This reminds me so much of the political prognosticator Nate Silver. His secret “black box” is supposedly all about using statistics to accurately predict election results.

But Silver is just like the stock market. He was up, down and all over with his Trump predictions. He got nothing right.

The point is that anyone who predicts what the market will do post-election is engaging in a guessing game at best… and lying at worst.

That kind of behavior is all ego. And ego kills more accounts than anything.

The fact is if you had become deathly afraid of the rise of the Fourth Reich due to watching CNN 24/7 over the last six months, and if you placed a big bet on a “Trump as Hitler”-induced market crash to back your narrative, you lost your shirt. You got killed.

Honestly, you were stupid if you did that.

The much smarter option is always to ride trends regardless of whatever new event is unfolding.

The best way to trade Trump’s presidency is to take your trend signals and ride trends to the end until they bend. And along the way protect your downside with stop losses in place at all times.

That’s the consistent, repeatable way to make fat gains in the market.

The other stuff is a sideshow designed to take your money.