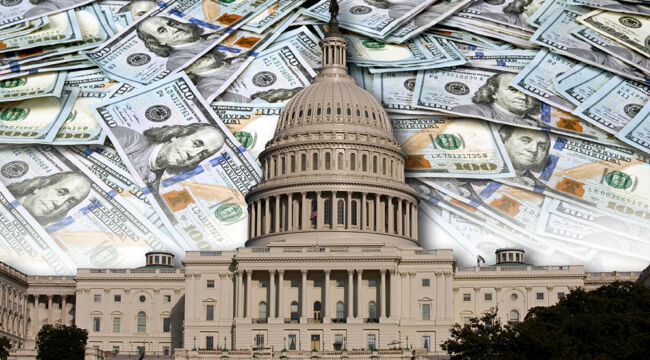 We note the following: the United States Department of Defense has failed its annual audit for the fifth consecutive year.

It has — in fact — failed each and every audit since the business began in 2018.

Has Congress seized the red pencil… and threatened to run it through the defense budget until the Pentagon can square the ledgers?

No it has not.

Congress’ latest proposal would spend an additional 8% over last year’s allocations… in fact.

The Private Sector vs. Government

Imagine the scene at a private concern, Company X you may name it. For five consecutive years its “management” has failed the audits.

Yet instead of demanding a square accounting, ownership showers this mismanagement team with even greater resources to squander.

A private concern is jealous of its capital and guards it with great ferocity. Yet the government runs to a different accounting.

Would an airline park its planes on a tarmac, idle, with the engines going? It is very nearly inconceivable. Fuel is costly.

Yet the United States Air Force has done it. It has deliberately wasted fuel by running the engines on parked planes. Why?

Because the end of the fiscal year was nearing. And if the Air Force did not burn through all the fuel allotted it in this year’s budget, it could not justify requests for additional fuel the following year.

The solution of course is to run the engines on inert airplanes — to literally burn fuel.

Can you imagine it? But here you have the “logic” of government appropriations.

We cite but one example. Many others exist — be assured.

Yet today we recognize a distressing possibility: Sound money does not ensure sound government. Sound money alone will not restrain it.

Sound Money Is the Money of a Free People

That is one reason we embrace gold. It curbs, checks and limits the natural rascalities of government.  It is a money suited for a free people.

Unlike today’s money — which is disguised debt — government cannot fabricate gold into existence at a stroke. Human labor must haul it out of the ground. Often, at great expense.

Yet men would not do it if they did not find it profitable.

And as we have argued before: Paper (fiat) money fuels government in the manner oxygen fuels fire. And as Washington long ago warned:

“Like fire [government] is a dangerous servant and a fearful master.”

Meantime, gold is a sound money. It is therefore an honest money.

An honest, sound money is a disciplined money. It chains government down in thick, imprisoning fetters.

Would the Air Force get away with burning fuel if the government truly had to watch its money? Perhaps it would not.

State-controlled money is immoral, dangerous and impoverishing. It paves the way for government theft of private wealth through the inflation tax, and thus allows the state to do more of what it does best: wage wars, kill, imprison, steal and enrich the friends of the regime at the expense of everyone else. Privatizing the monetary system and imposing a “separation of money and state” would help limit these activities.

Today many cryptocurrency drummers believe these digital currencies are 21st-century gold. They are private creations of the free market. Governments cannot monkey them.

Utopianists even believe cryptocurrencies can murder the state altogether, consigning it forevermore to history’s hell box.

We have argued our piece for sound money. Yet does private, decentralized money — sound money — necessarily equal restrained government?

Alas, the answer is no. McMaken:

It’s also important to not overstate the benefits of taking money out of the hands of the state. The temptation to push the “fix the world” idea to utopian levels is often seen among cryptocurrency maximalists, and among some gold promoters as well…

The idea that changing to different money will somehow end theft, poverty or even war is the sort of messianic thinking that would have given old-school Marxists a run for their money.

Gold of course predated the state. Yet gold did not box in the state, the ambitious, avaricious and mischievous state.

The state grew and grew regardless… as the tick grows and grows under constant intake of blood.

The State’s Ambitions Are Boundless

States long predate the money monopolies they now enjoy. During the 16th and 17th centuries — without the benefit of fiat currencies — states created enormous standing armies for the first time. They established mercantilist economies. Many rulers managed to assemble large bureaucracies to serve absolutist states. States were centralized to a degree that had not been seen in Western Europe since the Romans. It was a period of enormous gains in state building for princes and their agents.

Yet these states could not “print money” nor enjoy the benefits of fiat money except in very short-lived and limited cases. Indeed, this period of immense state growth was also a period of “concurrent” and “parallel” currencies during which a wide variety of gold and silver coins — most of them foreign — competed within the borders of a single state. Many efforts by regimes to issue questionable, debased money failed because there were so many alternatives. But this didn’t stop, say, Louis XIV from hammering together a powerful state.

So when we ask ourselves the question “Can states survive without fiat currency?” the answer is clearly, “All experience points to yes.”

Alas… all experience does point to yes.

The state does not require a monopoly on money to conduct its business, this fellow notes. What does it require?

Taxation forms the living and vital bloodstream of the state. So long as taxes flow in, the heart is busy… and the blood flows freely.

One Piece of a Much Larger Puzzle

Taking the control of money out of the hands of politicians and bureaucrats is clearly a good thing, and ought to be done quickly and thoroughly. But it won’t “fix the world.” It’s only a piece of a much larger puzzle.

One piece of a much larger puzzle… indeed.

We must conclude: Sound money — in this fallen world of sin and vice — cannot constrain sinful and viceful men determined not to be constrained

Alas: The ability to constrain sinful and viceful men is the puzzle piece that has always eluded us…

And likely always will be.