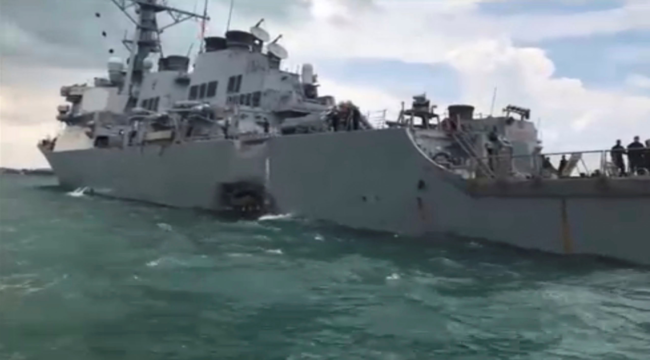 Is Someone Attacking the U.S. Navy?

I’m most known for my research into currency wars, international monetary economics and financial warfare.

But I also jointly run a service, Rickards & Massengill’s Defense Technology Alert, that focuses specifically on the defense sector.

That’s why some recent tragic incidents involving the U.S. Navy have captured my attention.

There have been two deadly incidents within the past two months, in which Navy warships have collided with merchant vessels.

In the first incident, seven sailors were killed in June when the destroyer USS Fitzgerald collided with a cargo ship near Yokosuka, Japan.

Then early yesterday morning, the USS John McCain, a ship just like the Fitzgerald, collided with an oil tanker near the Strait of Malacca, close to Singapore. Sadly, 10 sailors are lost.

Is the Navy losing situational awareness? Are the crews not properly trained? Are they not keeping watch?

We don’t know at this point. It’s all under investigation. But there’s one possibility I want to raise, and I want to be very clear about this:

I’m raising the possibility for public debate. It’s speculation on my part; I do not have any hard evidence. So I want to be clear that this is not something based on any actual intelligence I have.

But if there were just one incident, if one civilian vessel had collided with one destroyer, the assumption would be that it was just an accident. Maybe there was some equipment failure or the crew on watch failed to detect the ship for whatever reason.

But when the same basic incident happens twice, you have to raise your eyebrows. When you have a low-probability event that happens twice, in other words, the likelihood of coincidence becomes infinitesimal.

You have to basically multiply one low probability by another low probability, and what you end up with is an extremely remote chance that both events are purely accidental.

Is it possible that our adversaries, whether North Korea or Russia or perhaps even China — who are extremely good at hacking — have hacked into the navigation systems of these civilian vessels?

Could they be using them as, in effect, battering rams or propeller torpedoes to crash into our naval vessels?

I started a discussion about this topic on Twitter. Here’s what I posted:

“Second tragic collision of U.S. warship with merchant vessel raises suspicion of nav system hacking on merchantmen. Are we already at war?”

It received a lot of comments. One was a very interesting comment from former Vermont governor and presidential candidate Howard Dean.

Dean said, “It’s a possibility. I’m not sure if maybe experts talked about this. How about putting some knowledgeable intelligence folks on it?”

I agree completely. Again, I don’t want to jump to conclusions. But we should at least consider the possibility that someone’s combining cyberwarfare with kinetic techniques to attack our ships. In other words, hacking into a system to turn a civilian merchant vessel into a battering ram to attack our vessels remotely.

I’m not the only one asking questions about these incidents, though. Here’s what a former Navy information warfare specialist and current chief intelligence officer at a cyber intelligence service has to say about yesterday’s collision:

“When you are going through the Strait of Malacca, you can’t tell me that a Navy destroyer doesn’t have a full navigation team going with full lookouts on every wing and extra people on radar.”

“There’s something more than just human error going on because there would have been a lot of humans to be checks and balances.”

Again, I want to make it clear: I have no proof that hackers were behind these recent incidents.

And if it’s not true, it would be a relief because the problem would be easier to fix through better training and improved protocols.

Again, it could all just be coincidence. But I don’t think we should ignore these incidents. The odds of these low-probability events taking place in such a limited amount of time at least make you scratch your head.

You can bet the Navy will be doing everything possible to get to the bottom of this.