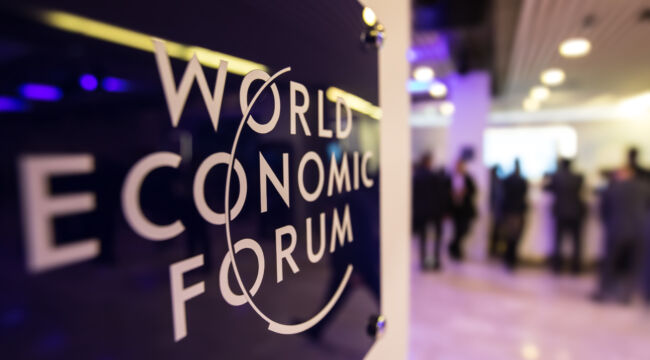 As I was sitting in my chair steaming over the latest World Economic Forum tweet, one question popped into my head.

Why do the Swiss put up with it?

Let’s face it: there’s a cartoonish Bond villain sitting in his mountainous lair, just short of a mustache to twirl, plotting to remake the world in his own image.

And if that’s not bad enough, the man who taught Klaus Schwab about geopolitics during his days at Harvard is none other than Henry Kissinger.

Yes, the Henry Kissinger responsible for giving away all of our technology to China.

Yes, the Henry Kissinger responsible for the war crimes of Operation Speedy Express and Operation Menu.

Yes, the Henry Kissinger who refused to serve on the 9/11 Commission because he wouldn’t divulge the names of his shady clients.

If Jimmy Carter is a far better ex-President than a President, then Kissinger is a far more influential statesman now than he ever was as Secretary of State.

Because his ace student is the Chairman of the World Economic Forum.

Eat ze bugs. You’ll own nothing and be happy. Go green or go home.

You know, all those things none of us want to do.

And yet, every year, Schwab rounds up the world’s leaders and bids them come to his lair in Davos, for a chat.

And every year the Swiss government doesn’t just tolerate the World Economic Forum, it encourages the WEF.

Maybe that’s because of the enormous economic benefit to the Swiss economy.

After all, if you’re a prostitute who charges EUR 700 per hour and EUR 2,300 for the night, who better to hit up than those with unlimited taxpayer funds? 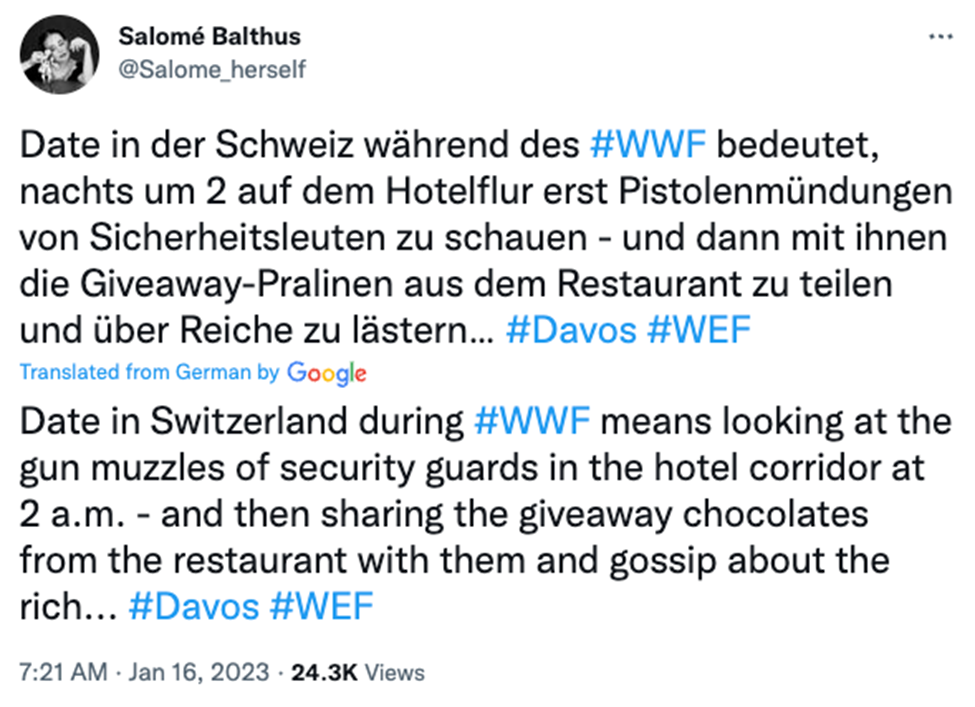 Be careful, Salomé! You don’t want any of those security guards accidentally tripping their triggers…

Zero Hedge reported on the “Dark Side of Davos” earlier this week. (I suppose their man had to pay extra for that.)

And of course, the UK’s The Daily Mail had to pitch in.

The Mail is the Official Newspaper of English Housewives™. It’s so wonderfully informative that all those wives now know what their traveling husbands are doing.

I’m reminded of a true story a fellow City banker told me.

“The City” is London, of course. Not New York.

A mutual friend of ours was at a high-end brothel in Chelsea getting his usual… ahem… “services” when a call came through.

(Yes, in those days you’d take personal calls on the brothel’s landline without any fear of exposure. Ladies of the night had infinitely more discretion then than they do now. Damn Instagram to hell!)

He hastily tightened his robe, slipped on his slippers and opened his door to pick up the phone.

But upon opening the door, he shrieked in horror.

Across the hallway, an older gentleman had just tightened his robe, slipped on his slippers, and opened his door.

My friend gasped and exclaimed…

After the obligatory wincing, he realized the trouble wasn’t so much seeing his father like this.

The real trouble was figuring out which one of them the phone call was for.

Oh, were our problems that small nowadays!

The Devil Went Down to Davos

Before you clutch your pearls and exclaim, “I can’t believe they do that over there!” one must banish Cotton Mather and Jonathan Edwards from their American Puritan mind.

Prostitution in Switzerland is completely legal and regulated. There are over 20,000 sex workers in the country.

Hell, they even accept credit cards!

That means these politicians can even claim back the cost of their exploits on their expense accounts. It’s incredibly thoughtful and efficient if you ask me.

And thanks to a sweet deal with the European Union, an EU sex worker can obtain permission to work for 90 days in Switzerland if they present themselves to the relevant city authorities, undergo a police interview, and provide proof of a health insurance plan.

My goodness, they thought of everything!

The Mail was so impressed, their article included pictures of Salomé, practically advertising these services in Davos.

But, admittedly, I’m making light of a tremendously important forum.

The bootlicking Brookings Institution wrote in one paper that “It is appropriate to criticize the World Economic Forum as an elitist gathering of the super-rich.”

In the next paragraph – really – the same author wrote, “It is, however, in these precarious times that we need Davos more than ever.”

Really? And if so, why are we funding the UN?

But these elites – their word, not mine – need to have some good, clean fun.

After all, if Klaus Schwab, Ursula von der Leyen, and the second coming herself, Olena Zelenska, can tolerate a bit of Totalitarian Tallywhacker messing about the joint, who are we to object?

Anyway, the pollution their private jets are belching into the atmosphere is far worse than a bit of Hide the Bratwurst.

At the last WEF gathering, over 1,000 planes arrived to join in the frippery.

But Forum President Borge Brende said, “I think what is more important than that is to make sure we have agreements on how we, overall, move and push the envelope when it comes to the green agenda,” he said.

As with all things at this glittering party, watch the hips, not the lips.

Greg will be writing to you on Tuesday with more market insight, so make sure to keep an eye on your inbox!

And like we pointed out earlier, if you didn’t catch his article this week, we included it below.

Let me know what you think of today’s article by emailing me at feedback@dailyreckoning.com.

Looking forward to your thoughts (and to writing to you next Thursday morning!)

Don’t Fret over Winter Woes. Do This Instead!

If you aren’t a fan of cold weather, instead of bearing it another year, maybe its time to think about moving to greener pastures.

My story starts in Hasbrouck Heights, New Jersey, where I grew up.

My childhood was idyllic. I never thought I’d leave the Heights. Well, maybe just for college. When I was searching for colleges, I only looked within a hundred miles or so. I wound up going to Villanova.

I stayed there for four years and earned — their word, not mine — a finance degree with a minor in political science.

After that, I went to work on Wall Street. I had a menial job at Paine Webber to start, but then I got my first real Wall Street job at Lehman Bros. (before its collapse, of course). I worked there in Global Corporate Equity Derivatives as an accountant, believe it or not.

Honestly, I hated the job back then. I didn’t know how spreadsheets worked — yes, even with a finance degree. (Now I’m a Microsoft Excel nut. I think it’s one of the most extraordinary things ever invented.)

After that, I moved to Credit Suisse, who sent me to London — the center of global operations for banking. I was young. Not only did I love the city for being a Candyland for alcoholics, but I also needed the international experience to cancel out my mediocre grade point average to get into a top 25 U.S. business school.

Somehow, though, I stayed for a decade, until I discovered London Business School. There I earned a master’s (HA!) degree in finance.

My next job was as a futures broker, which I utterly loathed. When I had enough, I took a year off — pub crawling around London and pissing away my bonus money. Then I figured out that I needed a new job.

So I went to work for a company called 7city Learning, where all of the best finance trainers were working. I had no idea about any of that, but imagine walking into the 1927 Yankees locker room and being taught how to hit.

I spent my time teaching all the traders exams, the graduate programs of the various big banks and then the CFA Level 1 review courses. Yes, that’s the only level I’ve passed. I hate that exam. I never really wanted to run money anyway.

In 2009, my boss asked me to move to Singapore to help build the business in Asia. Then I went to work for another financial training company where all of my friends had migrated.

Around the time I was getting bored of Singapore, my old bank asked me to work at talent development for them in Hong Kong. Nearly three years later, I moved to the Philippines, where I started an EdTech startup called Finlingo.

Along the way, I’ve racked up a ton of qualifications — I am a CAIA, FRM and CMT, amongst a few other things — but they don’t mean anything.

All that matters are my experience, my connections and my takes on things. So every day I’m going to do my snarky best to inform and entertain you.