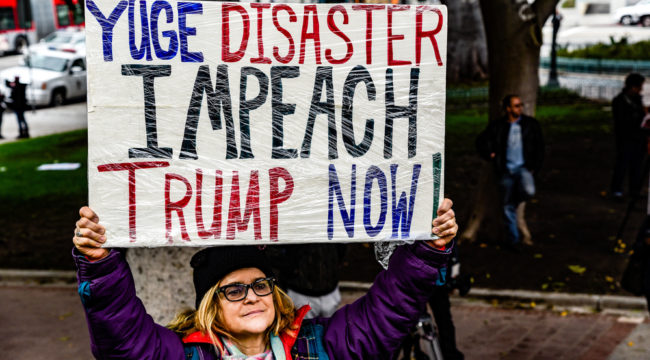 Rickards: Trump Will Not Be Impeached

Above the initials R.B. we are dealt with as follows:

“You lying scumbags! You won’t get away with it. Real Americans are behind Trump and can see the truth. One day we will find you! Personally!”

“Go [fornicate] yourself,” thunders another reader, demanding of us the anatomically impossible — and thumbing a nose at our Presbyterian standard.

A third consigns our poor soul to a signally abject fate: “Go to hell!”

We reckoned yesterday about the possible impeachment of President Trump.

We apparently gave some readers the impression we’re down on all fours with it… that we somehow have it in for Mr. Trump.

Yet we plead innocent on every count. And we go to the gallows under protest.

We have no heat against Trump.

He vastly entertains us, in fact.

And we sure hope he can still “drain the swamp.”

We just calls it as we sees it — wrong or right.

Sometimes right… sometimes wrong… and always in doubt… we just try to connect the dots.

Truth is, we’d rather not venture upon politics at all.

But sometimes politics stinks things up so badly, we have to hold our nose and wade on in.

Now that we’ve cleared some swampy underbrush, let’s see how the market took to yesterday’s shellacking…

Stocks stormed out of their foxholes today.

And after yesterday’s 373-point rout, the Dow charged 56 points ahead.

The Nasdaq lost 159 points yesterday. But today it countered with a 44-point advance.

The S&P returned with an eight-point gain of its own.

A quiet market lulled investors to sleep. Now we’re seeing psychotic traders setting      their hair on fire over a 2% market drop that’s taken the S&P 500 back to levels we haven’t seen since… April 20.

Perhaps all is peace again…

But revisiting yesterday’s question… will Trump really be impeached?

Trump will not be impeached. That will never happen in a Republican-controlled House of Representatives. Democrat dreams of regaining the House in 2018 are mostly wishful thinking (because of the way congressional districts are established), and even if they win, the investigations will mostly be over by then and Trump will be exonerated, if not unscathed.

And with his rock-solid record, don’t put us down for a bet against him.

But what’s Jim read on the markets after yesterday?

We’ve just about reached peak political hysteria. Things should calm down a bit from here… It would not be surprising to see stocks bounce back once the D.C. noise level is dialed down.

Stocks did recover today as noted… like a spider’s web that bends but holds.

The dysfunction in Washington will have real-world consequences for markets. Tax cuts, tax reform and massive infrastructure spending will not happen this year… A government shutdown over spending priorities is a real possibility for Oct. 1. A nasty debt ceiling fight could ensue right after that.

The most important development this week may be the one you didn’t hear about on TV or the internet. On May 10, gold launched a decisive turnaround from its most recent decline… The one major asset class that is showing decisive price action in an upward direction is gold. Expect that to continue.

Gold’s down about 11 bucks today after spiking 23 yesterday. This could be an ideal time to “buy the dip.”

Now… we implore you to tune in tomorrow. We’ll be taking a close look at President Pence’s re-election chances in 2020…