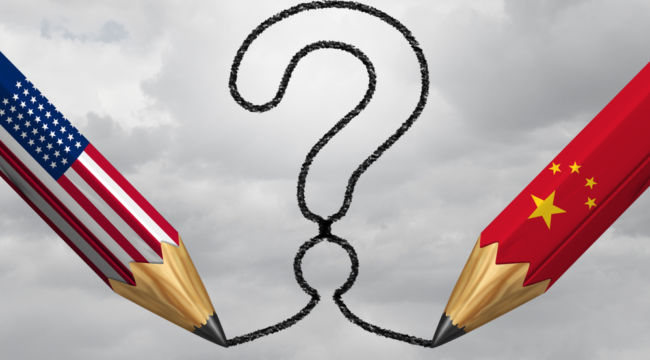 Last week, China and the U.S. announced that they were resuming trade talks in early October. Right on cue, the stock market rallied, bonds and gold fell and the euro came roaring back from interim lows.

It was as if they were playing “Happy Days Are Here Again” on CNBC.

But the real questions are whether the stock market rally was justified and whether anything has really changed in the China-U.S. positions to give confidence in these new proposed talks.

The short answers are no and no.

Talking is certainly better than not talking — and certainly much better than open fighting. But the deeper issues behind the trade war are still irresolvable. Nothing has changed.

President Trump and Vice President Pence have strongly criticized China for subsidizing its exports, its theft of intellectual property, requiring U.S. companies in China to hand over trade secrets, currency manipulation and other unfair trade practices.

In response to these well-publicized critiques, what is China saying in its own defense?

China is showing no signs of a change in posture. In fact, China is digging in for a long struggle in which it rejects U.S. claims as an infringement of China’s “core interests.”

The fact is China cannot give up its theft of U.S. intellectual property because it depends on that theft to propel growth. China also rejects U.S. efforts to alter the behavior of China’s state-owned enterprises (SOEs) that compete in the private sector but are government owned, controlled and subsidized. These are integral to the Chinese economic model.

And China cannot amend its internal laws to provide enforceability of any agreement because that involves a major loss of face and erodes Xi’s power.

By the way, China did not recommend the early-October date at random. There’s a reason why it didn’t propose this month, for example.

That’s because the talks would follow the Oct. 1, 2019, celebration in Beijing of the 70th anniversary of the victory of the Communists over the Nationalists for control of China and the beginning of the regime of the Communist Party of China that continues until this day.

President Xi did not want messy trade talks, let alone failed talks, to muddy the waters on this big celebration.

For his part, Trump cannot let the Chinese trade surplus with the U.S. persist because it’s a major drag on U.S. growth and it steals U.S. jobs.

The bottom line is the proposed October trade talks are mostly theater. There’s little reason to believe they will yield any type of meaningful deal.

But these issues are not just about trade. They must be seen as part of a new U.S.-China cold war with large geopolitical implications. It comes down to who will wield the most influence in the 21st century.

So none of the big issues is any closer to a solution, and this state of affairs may last for years.

Despite the temporary euphoria, the market will realize sooner than later that the resumption of trade talks is just part of China’s strategy of delay and Trump’s strategy of propping up the stock market.

When that realization sinks in, probably in late October, stocks will reverse course and bond and gold prices will resume their long-term climb.

Below, I show you why China is in many ways a vulnerable giant whose sheer size masks its many weaknesses. What does the future hold in store? Read on.