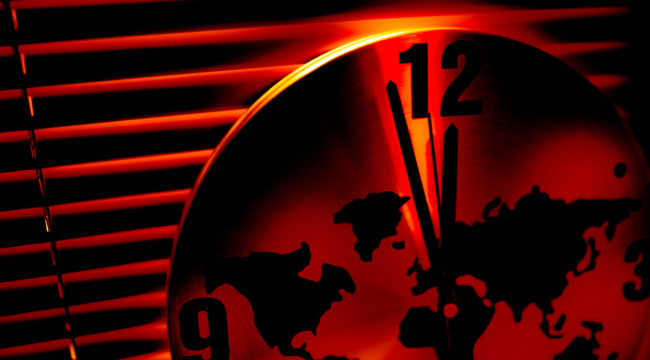 Revealed: The Exact Date of the Coming Apocalypse

We now have — on some authority, no less — the precise hour of the coming financial collapse.

We’ve circled the judgment day on our calendar, in funereal black.

We’re hurrying our last will and testament in preparation thereof… arranging our affairs… bending every effort to get right with our almighty maker.

When does the terrifying day arrive?

But let us first check in on today’s markets… while there’s still time remaining.

Stocks don’t seem to realize they go on borrowed time…

Only the Nasdaq shows any inclination of its fate — down 18 points today.

Even gold, the doomsday metal, fails to heed the doomy chimes. It’s down $11 today… as if all is peace with the world.

But we suspect the end must be near when the likes of Goldman Sachs, JPMorgan, Citi and Bank of America all implore their clients to “go to cash.”

“It’ll be a cascade, an avalanche,” wails Eric Peters, CIO of One River Asset Management.

Peters is the Nostradamus of today’s reckoning. He’s the seer who peered into the future and jotted down the apocalyptic date.

What rings the knell of doom according to Mr. Peters?

Peters says a collapse of the global credit impulse signals the end.

The credit impulse is the change in new bank credit as a percentage of overall GDP. It measures the amount of borrowing in the economy.

UBS analyst Arend Kapteyn warned earlier this year that the global credit impulse — covering some 77% of global GDP, no less — had “suddenly collapsed.”

And now he writes:

From peak to trough, the deceleration in global credit growth is now approaching that during the global financial crisis [-6% of global GDP]…

The EKG of a seizing heart: 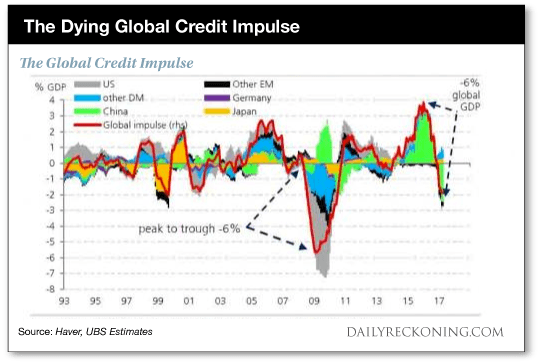 Returning to our prophet of apocalypse, Zero Hedge reports that Mr. Peters believes the cataclysm “will begin with an increasingly tighter Fed.”

We remind you that the Fed raised rates earlier this month — the third in six months — with more in prospect.

Not because [the Fed] believes the economy is getting stronger, but because it is desperately trying to catch up — before the next crisis.

Jim seems to confirm the dying credit impulse and indicates the attempted cure:

The economy is slowing. Even without any action, retail sales, real incomes, auto sales and even labor force participation are all declining. Every important economic indicator shows that the U.S. economy is slowing right now…

They’re getting ready for a potential recession where they’ll have to cut yet again. Then it’s back to QE. You could call that QE4 or QE1 part two.

Jim says the Fed’s now embarking on quantitative tightening, or QT. It will soon begin clawing back the behemoth balance sheet it amassed after the 2008 collapse.

Ah, but the date.

The date of apocalypse:

Balance sheet reduction will start slowly. And proceed for a few months without a noticeable impact. The Fed will feel validated.

But when the global credit impulse reverses, it’ll be a cascade. An avalanche. And I pin the tail on that donkey to be Valentine’s Day, 2018.

The date seems reasonable to our own Charles Hugh Smith. And for one primary reason:

Next February is a good guess, as recessions and market downturns tend to lag the credit market by about nine months.

Of course we offer this woeful vision of Valentine’s doomsday with heaping doses of table salt.

And we suspect this Peters fellow is simply pulling legs with his day-and-hour act.

Such knowledge exceeds the reach of mortal man.

But the makings of disaster appear cemented in place… and we suspect it’ll all come to rough business soon enough.

In the meantime, let us eat, let us drink… and let us be merry…

For the global credit impulse is dying…