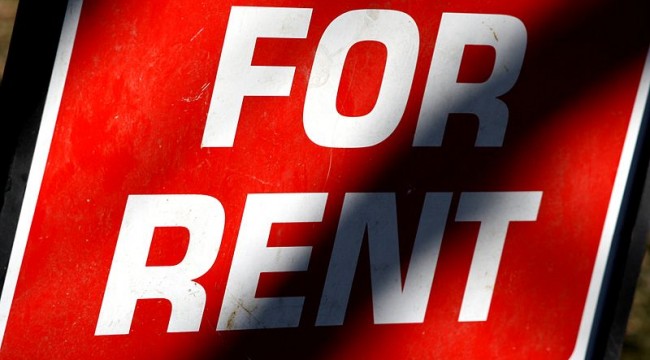 The year was 1993. Apartheid was breathing its last in South Africa. The World Trade Center was bombed — the first time. Buffalo lost the Super Bowl — again.

Little did anyone expect at the time that legions of Americans would start to become homeowners — a surge that continued for the following decade. 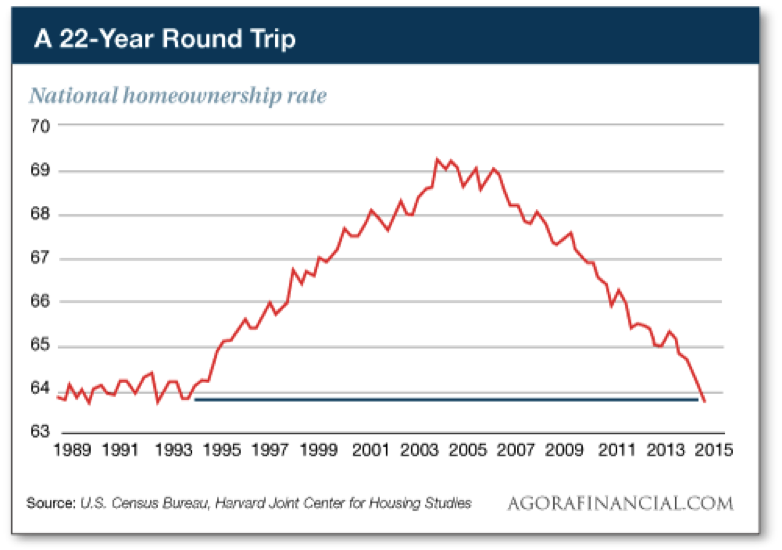 What’s more, “the trend does not appear to be abating,” says Chris Herbert, managing director of Harvard University’s Joint Center for Housing Studies.

Many of the people who’ve fallen out of the homeownership ranks never really “owned” a home in the first place. They had mortgages, often more than one, but no equity. Then came the Panic of 2008.

The steepest decline has come among Generation X, the folks unlucky enough to marry and procreate as the housing bubble steadily blew up in the early 2000s. But the rate has also declined among baby boomers. Only the over-65 set has a homeownership rate that’s stayed stable the last decade.

Result: Nearly half of all U.S. renters are “cost burdened,” in Harvard’s estimation. That is, they shell out at least 30% of their income to their landlords.

In the counties with the darkest shading on this map, it’s more than half paying at least 30% of their income for housing… 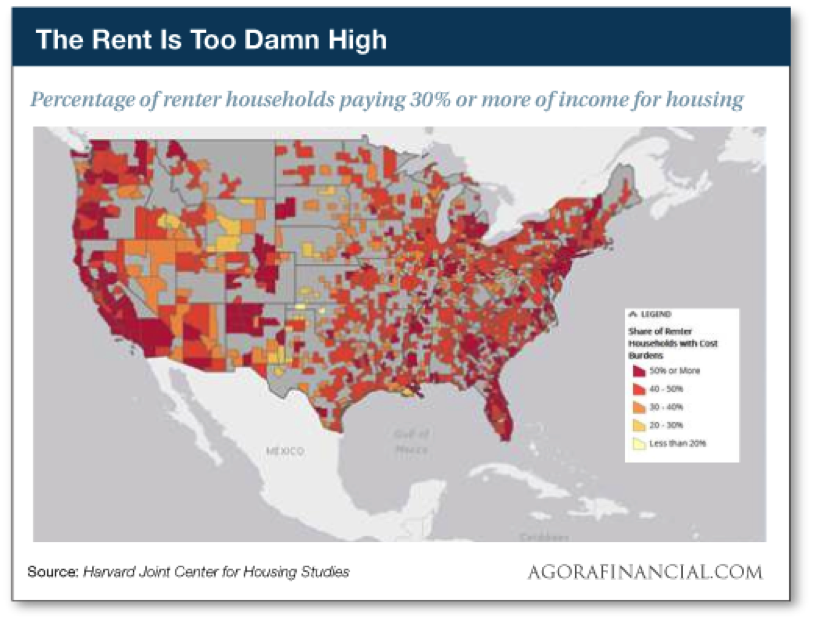 Construction of new rental property can’t keep up with demand, even though multifamily housing starts hit their highest level last year since 1987. Meanwhile, wage growth is sluggish and lenders are reluctant to lend.

Another wrinkle: “There are plenty of buyers looking for homes — just very few quality homes available for them to buy!” says one veteran of the residential real estate market.

This individual is an old friend of our income specialist Zach Scheidt. “Whenever I see Jackie,” he tells us, “I try to get her perspective. Few have the hands-on experience she’s accumulated, and even fewer have such firsthand views of how the market’s performing.”

Says Jackie, “Every time a new buyer contacts me, we start the process of looking for a home for them. I drive the buyer all over town looking for just the right house. But it’s nearly impossible to find a nice home for sale. And when we do find a good home in the right neighborhood, someone else makes an offer before we can write a contract. I haven’t seen such a tight real estate market in years!”

In many locations, “the number of quality homes available to would-be buyers is very low,” Zach elaborates. “That’s because new construction’s been down because homebuilders have been afraid to build new communities. Following the financial crisis, homebuilders faced too much risk investing money in developing a new community. They weren’t sure they’d be able to sell their homes. But that’s changing.”

“So we’re now in a period of low home ownership, low rental vacancies and high rental rates,” Zach sums up. “That’s a perfect environment for homebuilders to start developing new communities again, and I expect to see homebuilder stocks trade higher this summer.”

Don’t Fret over Winter Woes. Do This Instead!

If you aren’t a fan of cold weather, instead of bearing it another year, maybe its time to think about moving to greener pastures.