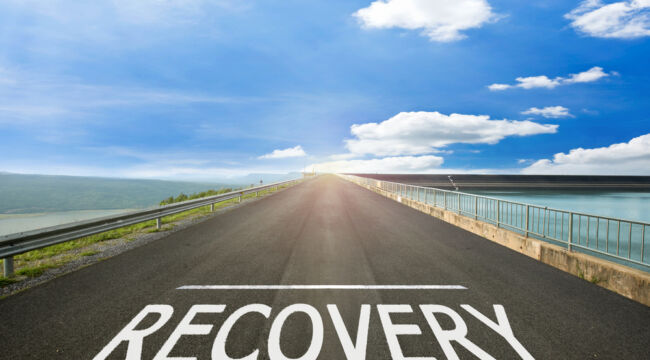 Recovery by the End of the Year?

Will the recession end by the close of 2020?

One “economic expert” boasting a “perfect record calling recessions” believes it will.

Will it? Today we mount the judge’s bench, hear evidence… and render verdict.

First to the verdict of the marketplace. How did the stock market fare today?

Main Street Goes One Way, Wall Street the Other

The Nasdaq — if you can believe it — is now positive on the year.

The United States Department of Labor reveals another 3.169 million Americans filed unemployment claims for the week ended May 2.

They join the existing 30 million Americans recently turned out upon their ears.

But rejoice — the Nasdaq is once again in green.

Let us now turn to the question swirling in the air:

Will the recession end by the close of 2020?

What was the rock of his case?

A Prediction Even More Accurate

We must be formidable future-seers as well. We began yelling about an inverted yield curve one full year before the professor — in July 2018.

What is the expression — close enough for government work?

In reminder, recession is commonly defined as two consecutive quarters of minus growth.

But GDP will likely vanish at an annualized 30–47% rate… depending which crystal-gazers you choose to believe.

An Act of Self-Destruction

Of course, this recession is an act of self-destruction, a deliberate shooting of a bullet into the foot.

Let us not forget: Government chose recession in the broader interest of public health.

We cannot claim recession would have come in this year without the virus. Even if it did… it would not have raised one fraction of the hell.

A standard-issue recession does not plunge 33 million into unemployment within seven weeks. Nor does it dynamite GDP at a 30–47% annualized rate.

These times lack all precedent, all reference markers.

We will nonetheless claim the laurel as master economic psychic.

The Lesson of the Yield Curve

But why is an inverted yield curve such a menace? As we have explained prior:

Long-term rates normally run higher than short-term rates. It reflects the structure of time in a healthy market…

But when short- and long-term yields begin to converge, it is a powerful indication the bond market expects lean times ahead.

When the long-term yield falls beneath the short-term yield, the yield curve is said to invert.

As we have also explained before, an inverted yield curve is a nearly perfect recessionary omen.

An inverted yield curve has foretold recession seven of seven prior occasions… as confirms MarketWatch.

And now this recession fortune teller has foretold eight of the past eight recessions… regardless of the circumstances behind the eighth.

Next we come to this question:

A “skinny U” Recovery

Dr. Harvey, the man with the spotless record, says no. You can expect robust recovery early next year.

Not the “V-shaped” recovery the sunshine-blowers have projected — but a “skinny U” nonetheless. A vaccine will be the spark plug.

“In the global financial crisis [in 2008–09], we never could tell when it was going to end,” [Harvey] said in a telephone interview. This time, he said, “The cause is clear — it’s a biological event, and the solution is also clear: another biological event”

He doesn’t anticipate the V-shaped recovery that Wall Street touted a few weeks ago. “I think it’s more what I call the ‘skinny U,’ because I do believe that we will have a vaccine by the first quarter [of 2021],” he said.

Just so. But is a vaccine likely by the first quarter of 2021?

We instructed our minions to research the literature on vaccination. Are vaccines effective against viruses such as this? When can the world expect one, with history as our guide?

We ordered them off in pursuit of answers.

They returned with answers. But their findings did not encourage.

Do Not Count on a Vaccine

COVID-19 is of course a coronavirus. Not once — despite all the angels and saints — have medical men brewed a successful vaccine against a coronavirus.

It is walled off, inaccessible to the vaccinary machinery.

Dr. Ian Frazer — a scientist — has himself helped develop vaccines. According to him:

It’s a separate immune system, if you like, which isn’t easily accessible by vaccine technology. It’s a bit like trying to get a vaccine to kill a virus on the surface of your skin.

Not only are these vaccines poor fighters. They are turncoats who aid and comfort the enemy:

One of the problems with corona vaccines in the past has been that when the immune response does cross over to where the virus-infected cells are it actually increases the pathology rather than reducing it. So that immunization with SARS corona vaccine caused, in animals, inflammation in the lungs, which wouldn’t otherwise have been there if the vaccine hadn’t been given.

I think it would be fair to say even if we get something which looked quite encouraging in animals, the safety trials in humans will have to be fairly extensive before we would think about vaccinating a group of people who have not yet been exposed to the virus.

They might hope to get protection but certainly wouldn’t be keen to accept a possibility of really serious side effects if they actually caught the virus.

A Drug Therapy Is More Likely

Of course it is possible the professionals will mix a vaccine that is both safe and effective. Heaps and heaps of scientists labor furiously for that purpose.

But the history is against them — at least to our understanding.

And the possibility of a functioning vaccine by the first quarter of 2021 appears… unlikely.

We hazard a workable drug regimen, or regimens, will emerge far ahead of a vaccine. They may not work a cure. But they might pack enough wallop to hold the killer off.

And a dependable therapeutic would likely coax Americans from their bunkers, from their foxholes. When this therapeutic comes on scene, we cannot say of course.

But the economy — or greater segments of it — will swing open before long. The states are making plans.

And millions of Americans may choose to test their luck at work… rather than remain chained down at home, jobless and hopeless, waiting for a drug.

They will fare out into a changed America with their eyes open, their tread light… and their fingers crossed.