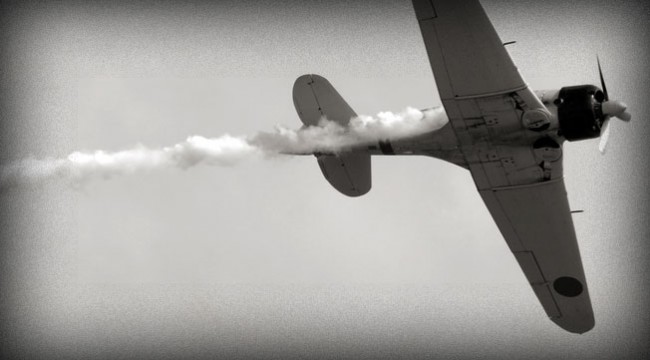 Record Highs from the Kamikaze Rally

The deflationists continue to run rampant with glee as stocks, gold and commodities in general get hammered. Is this the market giving a big “thumbs down” to quantitative easing (QE)? Have central banks started to lose the final battle in their war to reflate asset prices? Or is this just the big dump before the insiders buy at the bottom and start the next pump?

We’ll leave conspiracy theories aside for the day. Markets are markets. They’re volatile. QE has effectively anesthetized investors for the last few years, numbing the pain of low growth with higher stock prices. But to not feel pain is to not feel. And pain is a kind of sensory feedback that provides useful information: Don’t do this!

The “this,” in this case, is buying stocks purely on the expectation that the authorities are in control and have it all figured out. If you believe that, you ignore other important signals, such as prices, market cycles, earnings and the economy. All of those indicators point to weak or slow earnings growth. Which force is stronger then, the power of Fed money or the grinding gravity of credit deflation?

For the moment, the answer seems to be Fed money. For evidence, just look at the S&amp;P 500. The U.S. big-cap index continues to hit record highs, moving up over 1,600-mark today. And over the last year, there have been some clear leaders (with tech stocks being the laggards).

JNJ is made up of over 275 operating companies in 60 different countries. It has 146 manufacturing centers, dozens of products, $239 billion in revenues in 2012 and over 128,000 employees. Its shares have also doubled the performance of the S&amp;P 500 in the last 12 months. 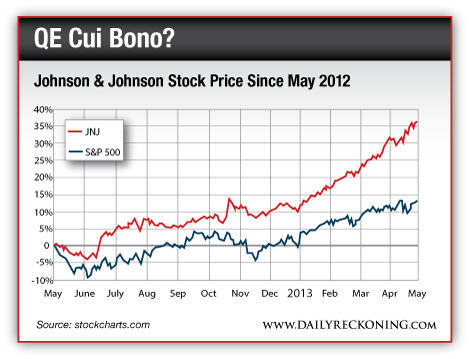 You’d have to look at the balance sheet and the cash flow statement to determine if the share price performance was related to the strength of the business. But you could easily argue that companies like JNJ are the leading beneficiaries of quantitative easing. It doesn’t have a generous dividend yield. But for investors looking for “safe” blue chips, it’s a good fit.

But as we wrote recently, this could be part of the kamikaze rally as well. Investors have come to believe that stocks will always be lifted by central bank bond purchases. In last week’s update for The Denning Report, we suggested this belief is similar to the Japanese belief that divine Providence favored their island when confronted with foreign threats.

Two Mongol invasions — the first in 1274 and the second in 1281 — were repelled, in part, by typhoons that swept away Mongol invasion fleets. The “divine wind,” or kamikaze, that whipped up the storms was, of course, the name given to the tactic of suicide bombing by airplanes in World War II. In the battle of Okinawa in 1945, Japanese kamikaze attacks sunk at least 20 U.S. naval vessels and damaged 157 others.

In today’s terms, the kamikaze rally is the rise in the stock market you get from currency depreciation/debasement. This kind of victory-through-weakness is every bit as destructive, in the end, as the kamikaze attacks. The “victory” is the rise in stock prices and the temporary boost in exports from countries that debase first and fastest.

The weakness is the eventual currency crisis that results. Ordinary people lose purchasing power as imports cost more. Any temporary boon to stock prices is wiped out as low interest rates and inflation destroy middle-class savings.