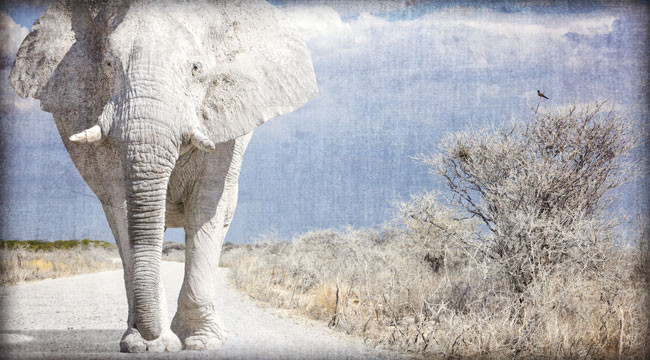 I would like readers to consider carefully the fundamental difference between a “real economy” and a “financial economy.” In a real economy, the debt and equity markets as a percentage of GDP are small and are principally designed to channel savings into investments.

In a financial economy or “monetary-driven economy,” the capital market is far larger than GDP and channels savings not only into investments, but also continuously into colossal speculative bubbles. This isn’t to say that bubbles don’t occur in the real economy, but they are infrequent and are usually small compared with the size of the economy. So when these bubbles burst, they tend to inflict only limited damage on the economy.

In a financial economy, however, investment manias and stock market bubbles are so large that when they burst, considerable economic damage follows. I should like to stress that every investment bubble brings with it some major economic benefits, because a bubble leads either to a quantum jump in the rate of progress or to rising production capacities, which, once the bubble bursts, drive down prices and allow more consumers to benefit from the increased supplies.

In the 19th century, for example, the canal and railroad booms led to far lower transportation costs, from which the economy greatly benefited. The 1920s’ and 1990s’ innovation-driven booms led to significant capacity expansions and productivity improvements, which in the latter boom drove down the prices of new products such as PCs, cellular phones, servers and so on, and made them affordable to millions of additional consumers.

With or without Paul Volcker’s tight monetary policies, disinflation in the 1980s would have followed the highly inflationary 1970s.

The energy boom of the late 1970s led to the application of new oil extracting and drilling technologies and to more efficient methods of energy usage, as well as to energy conservation, which, after 1980, drove down the price of oil in real terms to around the level of the early 1970s. Even the silly real estate bubbles we experienced in Asia in the 1990s had their benefits. Huge overbuilding led to a collapse in real estate prices, which, after 1998, led to very affordable residential and commercial property prices.

So my view is that capital spending booms, which inevitably lead to minor or major investment manias, are a necessary and integral part of the capitalistic system. They drive progress and development, lower production costs and increase productivity, even if there is inevitably some pain in the bust that follows every boom.

In this respect, I should like to point out that as late as the early 1980s, the U.S. resembled far more a “real economy” than at present, which I would definitely characterize as a “financial economy.” In 1981, stock market capitalization as a percentage of GDP was less than 40% and total credit market debt as a percentage of GDP was 130%. By contrast, at present, the stock market capitalization and total credit market debt have risen to more than 100% and 300% of GDP, respectively.

As I explained above, the rate of inflation accelerated in the 1970s, partly because of easy monetary policies, which led to negative real interest rates; partly because of genuine shortages in a number of commodity markets; and partly because OPEC successfully managed to squeeze up oil prices. But by the late 1970s, the rise in commodity prices led to additional supplies, and several commodities began to decline in price even before Paul Volcker tightened monetary conditions. Similarly, soaring energy prices in the late 1970s led to an investment boom in the oil- and gas-producing industry, which increased oil production, while at the same time the world learned how to use energy more efficiently. As a result, oil shortages gave way to an oil glut, which sent oil prices tumbling after 1985.

At the same time, the U.S. consumption boom that had been engineered by Ronald Reagan in the early 1980s (driven by exploding budget deficits) began to attract a growing volume of cheap Asian imports, first from Japan, Taiwan and South Korea and then, in the late 1980s, also from China.

I would therefore argue that even if Paul Volcker hadn’t pursued an active monetary policy that was designed to curb inflation by pushing up interest rates dramatically in 1980/81, the rate of inflation around the world would have slowed down very considerably in the course of the 1980s, as commodity markets became glutted and highly competitive imports from Asia and Mexico began to put pressure on consumer product prices in the U.S. So with or without Paul Volcker’s tight monetary policies, disinflation in the 1980s would have followed the highly inflationary 1970s.

In fact, one could argue that without any tight monetary policies (just keeping money supply growth at a steady rate) in the early 1980s, disinflation would have been even more pronounced. Why? The energy investment boom and conservation efforts would probably have lasted somewhat longer and may have led to even more overcapacities and to further reduction in demand. This eventually would have driven energy prices even lower. I may also remind our readers that the Kondratieff long price wave, which had turned up in the 1940s, was due to turn down sometime in the late 1970s.

It is certainly not my intention here to criticize Paul Volcker or to question his achievements at the Fed, since I think that, in addition to being a man of impeccable personal and intellectual integrity (a rare commodity at today’s Fed), he was the best and most courageous Fed chairman ever.

However, the fact remains that the investment community to this day perceives Volcker’s tight monetary policies at the time as having been responsible for choking off inflation in 1981, when, in fact, the rate of inflation would have declined anyway in the 1980s for the reasons I just outlined. In other words, after the 1980 monetary experiment, many people, and especially Mr. Greenspan, began to believe that an active monetary policy could steer economic activity on a noninflationary steady growth course and eliminate inflationary pressures through tight monetary policies and through cyclical and structural economic downturns through easing moves!

This belief in the omnipotence of central banks was further enhanced by the easing moves in 1990/91, which were implemented to save the banking system and the savings & loan associations; by similar policy moves in 1994 in order to bail out Mexico and in 1998 to avoid more severe repercussions from the LTCM crisis; by an easing move in 1999, ahead of Y2K, which proved to be totally unnecessary but which led to another 30% rise in the Nasdaq, to its March 2000 peak; and by the most recent aggressive lowering of interest rates, which fueled the housing boom.

Now I would like readers to consider, for a minute, what actually caused the 1990 S&L mess, the 1994 tequila crisis, the Asian crisis, the LTCM problems in 1998 and the current economic stagnation. In each of these cases, the problems arose from loose monetary policies and excessive use of credit. In other words, the economy — the patient — gets sick because the virus — the downward adjustments that are necessary in the free market — develops an immunity to the medicine, which then prompts the good doctor, who read somewhere in The Wall Street Journal that easy monetary policies and budget deficits stimulate economic activity, to increase the dosage of medication.

The even larger and more potent doses of medicine relieve the temporary symptoms of the patient’s illness, but not its fundamental causes, which, in time, inevitably lead to a relapse and a new crisis, which grows in severity since the causes of the sickness were neither identified nor treated.

So it would seem to me that Karl Marx might prove to have been right in his contention that crises become more and more destructive as the capitalistic system matures (and as the “financial economy” referred to earlier grows like a cancer) and that the ultimate breakdown will occur in a final crisis that will be so disastrous as to set fire to the framework of our capitalistic society.

Not so, Bernanke and co. argue, since central banks can print an unlimited amount of money and take extraordinary measures, which, by intervening directly in the markets, support asset prices such as bonds, equities and homes, and therefore avoid economic downturns, especially deflationary ones. There is some truth in this. If a central bank prints a sufficient quantity of money and is prepared to extend an unlimited amount of credit, then deflation in the domestic price level can easily be avoided, but at a considerable cost.

First, it is clear that such policies do lead to depreciation of the currency, either against currencies of other countries that resist following the same policies of massive monetization and state bailouts (policies which are based on, for me at least, incomprehensible sophism among the economic academia) or against gold, commodities and hard assets in general. The rise in domestic prices then leads at some point to a “scarcity of the circulating medium,” which necessitates the creation of even more credit and paper money.

Ed. Note: Whether it is a “real economy” or a “financial economy” or some other type of economy altogether, the only question you need to ask yourself is, “Am I prepared for whatever comes next?” If you are, congratulations. You’re ahead of the curve. If you’re not, now is the time to get started. Not tomorrow or the next day. Now. Don’t wait to get trampled by the coming heard of “white elephant” investments. Sign up for The Daily Reckoning email edition, for FREE, right here. Inside each issue you’ll learn invaluable lessons about protecting your wealth in difficult times, and even growing it no matter what the economy does. And it’s free, so you’ve got absolutely nothing to lose. Take 30 seconds out of your day, and start getting ahead of the curve.