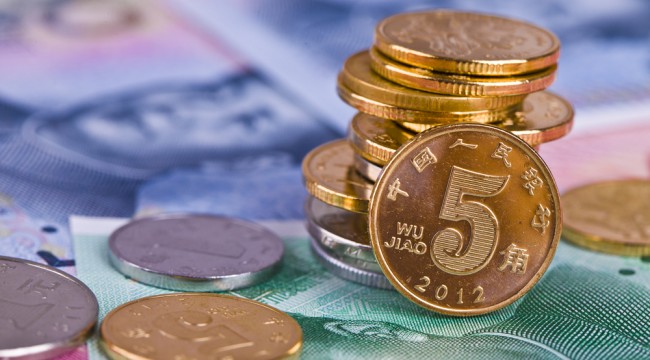 Race to the Bottom

“What if China decides to do what everyone else in the world has done to their currencies, debasing them, depreciating them, and whacking them until there is no more to whack, just to improve their exports?” mused our friend Chuck Butler yesterday.

From Chuck’s lips to the Politburo’s ears: The People’s Bank of China devalued the renminbi overnight.

“This is the biggest one-day move since July 2005,” Chuck writes this morning from his perch at EverBank Global Markets in St. Louis, “when the Chinese dropped the peg to the dollar and revalued the currency upward by 2%.”

The essential background: Chinese exports have been plunging of late.

That’s because most of China’s biggest trading partners have seen their currencies fall against the renminbi the last 18 months, so imports from China cost more.

The United States is the notable exception, because a loose peg remains between the renminbi and the dollar.

So if the Chinese are to keep pace with everyone else — all the cool kids are doing it! — they must devalue against the dollar and fire the next shot in the currency wars… 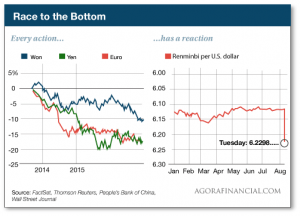 And on it goes: “Now China’s trading partners will have to make moves in their currencies so that the offset currencies aren’t too strong and out of whack when compared to the renminbi,” Chuck adds.

“King Dollar is the only strong currency left. That should kill the Fed September rate hike,” tweeted Jim Rickards only moments after the announcement from Beijing.

“A cheaper yuan means a strong dollar, which lowers import prices, which is deflationary for the U.S.,” he adds. “You raise rates to fight inflation and cut them to fight deflation.”

What do you do if the fed funds rate is near zero and has been for lo the last 6½ years? You don’t raise them, that’s for sure.

This morning, the mainstream is throwing in the towel, going along with Jim’s long-standing assertion the Fed won’t raise rates at its next meeting Sept. 16-17.

“I doubt if [the Chinese decision] will derail the Fed’s plans to tighten, but it may well slow the pace of their tightening,” IronFX’s Marshall Gittler tells MarketWatch.

“Wait till next year” was the IMF’s message.

“Pushing the SDR decision back nine months was playing rough with China,” Jim suggests, “ so they decided to play rough with us.”

All’s fair in the currency wars he’s been chronicling since he wrote the book of that name in 2011.