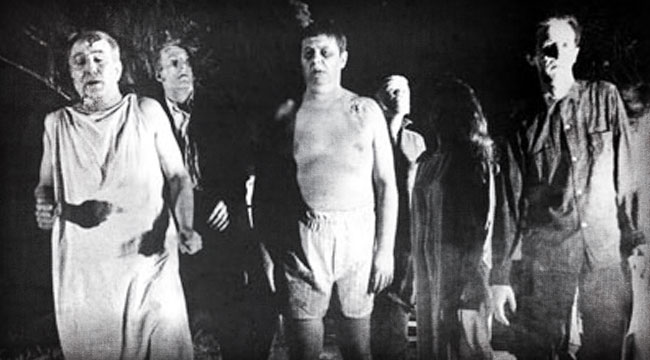 More QE for a Zombified Electorate

[N]othing is more essential than that permanent, inveterate antipathies against particular nations and passionate attachments for others should be excluded, and that in place of them just and amicable feelings toward all should be cultivated. The nation which indulges toward another an habitual hatred or an habitual fondness is in some degree a slave. – George Washington’s farewell address

This time it was the European Central Bank that bought the drinks. US investors bellied up to the bar and helped themselves; the Dow rose 69 points. Gold kept slipping.

Since the Fed ended its QE program, the Bank of Japan and the ECB have come forward promising more money for stock markets.

Draghi has faced increased pressure to do more to support a slowing euro-zone economy after the Bank of Japan last week unexpectedly announced it would add the equivalent of another $730 billion to its balance sheet.

The US has not and cannot decouple from the rest of the world. The US is struggling too.

And at the end of its two-day policy meeting yesterday, the ECB announced a plan to buy another €1 trillion in asset-backed securities. This will bring the ECB’s balance sheet back to 2012 levels.

According to the standard narrative, the US is on the road to recovery, as Japan and Europe struggle.

Globalization? Forget it. The US has apparently “decoupled” from the rest of the world. And now Japan and the euro zone need more QE.

The story is appealing. But untrue. The US has not and cannot decouple from the rest of the world. The US is struggling too.

That was the real message from the midterm elections. The Democrats had promised a lot. They hadn’t delivered. The voters — whose real incomes have been going down since the turn of the century — knew the truth.

Giveaways and special privileges have zombified the electorate. It doesn’t want anything different. It just wants more.

What would be different?

Any chance of those things? Did you hear Mitch McConnell promise them? Would a single member of Congress vote for them?

Russia has a flat income tax rate of 13%. Simple. Easy. Cheap to administer.

A flat tax would save billions of dollars and help businesses, investors and households. But Congress will never vote for a flat tax because it would mean giving up its power to hand out special favors.

That is what makes a national election at least as uplifting as professional wrestling — and not just because the contestants can be gaudy and breathtakingly stupid. Sometimes there’s something really at stake: the private interests of the elite against the public interest of everyone else.

As for a neutral foreign policy, we could just butt out and watch the Sunnis and Shia kill each other without our help or our heavy artillery. That might be good for them and good for us, but it would be bad for the security industry.

But wait… There is “a savage global terrorist threat that seeks to wage war on every American,” said Mitch McConnell and John Boehner in yesterday’s Wall Street Journal.

The terrorists don’t seem to be gunning for the Swiss.

“Avoid foreign entanglements,” said Washington, thinking ahead. But today, the city named after him — and especially its northern Virginia suburbs — never met a foreign affair it didn’t want to get entangled in.

Oops… have we said something wrong?

The professional economists in the room are covering their mouths and suppressing giggles.

What a terrible mistake that would be, they will tell you. We have to encourage unbalanced budgets. We need to lure people to spend money — citizens, corporations and the government — not save it.

Ordinary Americans are wisely dragging their feet on this; US household net debt has gone down since 2007. But corporations and the government are doing stout service in the name of increasing debt slavery.

Why is it supposed to be a good idea to spend money you don’t have?

Well, there is something called the “paradox of thrift.” The paradox is that saving may be good for an individual, but it is bad for an economy as a whole.

Like so much of modern economics, the “paradox of thrift” is nonsense.

When a single person saves, he improves his personal finances. But when many people save, consumer spending goes down. Then sales go down… profits go down… and the entire economy disappears down some uncharted rat hole.

That’s why Martin Wolf said Japan has “too much” savings in Wednesday’s Financial Times.

Like so much of modern economics, the “paradox of thrift” is nonsense.

Savings gives families a cushion against disaster. It also gives them the capital they need to improve their standard of living.

On our farm, for example, we have a woodpile about 50 yards from the kitchen door. In the winter, we spend a fair amount of time just bringing in firewood.

So, we put aside some savings… and use the money to build a woodshed closer to the house. Time saved. We can live more comfortably (a higher standard of living) and we have time available to do other things (more household output).

The same thing happens in an economy. Money spent is money gone forever. But money saved and invested is money that increases our standard of living, raises wages and adds to our wealth.

The US, Japan and Europe are still stimulating consumption and discouraging saving.

In Japan, this has been going on for more than 20 years — with little to show for it aside from the world’s highest government debt-to-GDP ratio. These policies have failed everywhere. That is one of the reasons the American voter turned against the Democrats; he held them responsible.

But they are extremely popular with Wall Street — the single biggest source of funding for Mitch McConnell’s reelection campaign. Over the last five years, the Fed has added $3.6 trillion to the financial system, much of it passing through or coming to rest on Wall Street. Whatever campaign contributions it took to support the unlocking of the Fed’s vault must have been the most successful investment ever.

With that kind of adrenaline pumping in Wall Street’s veins, it will be amazing if we don’t have more of it.

Ed. Note: There seems to be some confusion over the death of QE… Will it stay “dead” or will it rear its ugly head again sometime next year (or the year after that…)? It’s a story we’ve been following very closely in The Daily Reckoning email edition — a free e-letter that gives you the kind of entertaining and informative analysis you won’t find in the mainstream media. Don’t miss your chance to join the conversation. Click here now to sign up for FREE.