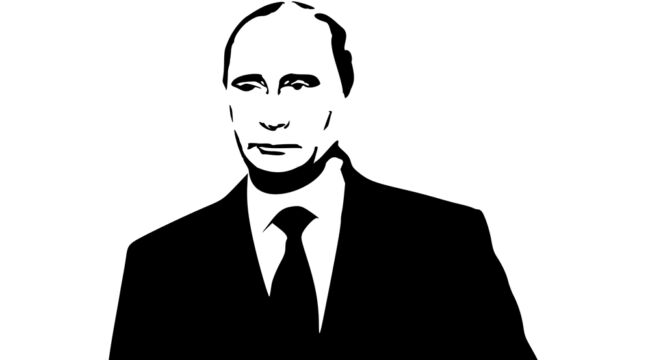 Push Has Come to Shove

This morning he seized Ukraine by the throat. Today he is squeezing plenty hard.

We hazard he will soon have Ukraine down upon the floor. The fellow says he is willing to take his hands off — if Ukraine yells uncle and accedes to his demands.

These demands include the “demilitarization and denazification” of Ukraine… and Ukrainian neutrality. That is, Ukraine must not join the NATO alliance.

Mr. Putin is waving off — vehemently — any who would leap to Ukraine’s help:

Whoever tries to impede us, let alone create threats for our country and its people, must know that the Russian response will be immediate and lead to the consequences you have never seen in history.

What historical consequences might these be? We leave you to your speculation. Yet we remind you that Russia keeps nuclear muskets in its arms locker.

This afternoon the United States president, Biden, reaffirmed he will not dispatch his men to Ukraine.

Yet he shook his fists and yelled a lot. He also announced additional sanctions against the Russian strongman and his goons.

But tellingly, these sanctions will not lock Russia out of SWIFT. That is of course the international payments system central to participation in the world economy.

Why not move more… SWIFT-ly… to punish Mr. Putin?

Our agents inform us the Germans shook their heads and said no. Perhaps that is because the Germans receive some 50% of their energy from Russia.

The Russian behavior is atrocious, the Germans seemingly say — yet we have our homes to heat.

How did the stock market take this morning’s news? Poorly at first… then less poorly… then rather well.

The Dow Jones took an immediate 800-point plummet. But by midmorning it began clawing its way up… down 600… down 200… then up 92 by closing whistle.

The S&P 500  followed in copycatting unison. Down heavily in early trading, it closed the day 63 points up.

Meantime, the Nasdaq Composite appeared to celebrate world peace — up a gobsmacking 436 points on the day after initial gloom. Why?

Did investors “buy the dip”? Do they believe Mr. Putin’s buccaneering will keep the Federal Reserve sitting on its hands?

What about oil and gold?

Oil and gold — both of them — were up and away this morning, and not surprisingly.

Is Putin Biting off More Than He Can Chew?

We wonder if Mr. Putin is stretching himself beyond capacity.

We have little doubt he will vanquish the Ukrainian forces. His own are too formidable.

The Russian leader may gag on Ukraine. It may even undo him. Protests in Russia are evidently forming.

How will the Russian people take to the economic privations sanctions may impose upon them?

Is Putin Solely to Blame?

It is true: Mr. Putin is the great bogey of this tale. He has gone, rudely, where he was not invited. But does he shoulder all blame for the present unpleasantness?

In 2014, University of Chicago political scientist John Mearsheimer authored an article — “Why the Ukraine Crisis Is the West’s Fault.”

Mearsheimer charts a sort of road map to the present crisis. This piece we now cite extensively:

The United States and its European allies share most of the responsibility for the crisis. The taproot of the trouble is NATO enlargement, the central element of a larger strategy to move Ukraine out of Russia’s orbit and integrate it into the West…

Elites in the United States and Europe have been blindsided by events only because they subscribe to a flawed view of international politics. They tend to believe that the logic of realism holds little relevance in the 21st century and that Europe can be kept whole and free on the basis of such liberal principles as the rule of law, economic interdependence and democracy.

But this grand scheme went awry in Ukraine. The crisis there shows that realpolitik remains relevant — and states that ignore it do so at their own peril. U.S. and European leaders blundered in attempting to turn Ukraine into a Western stronghold on Russia’s border. Now that the consequences have been laid bare, it would be an even greater mistake to continue this misbegotten policy…

Putin’s pushback should have come as no surprise. After all, the West had been moving into Russia’s backyard and threatening its core strategic interests, a point Putin made emphatically and repeatedly…

Imagine the outrage in Washington if China built an impressive military alliance and tried to include Canada and Mexico in it. Logic aside, Russian leaders have told their Western counterparts on many occasions that they consider NATO expansion into… Ukraine unacceptable, along with any effort to turn [it] against Russia…

In essence, the two sides have been operating with different playbooks: Putin and his compatriots have been thinking and acting according to realist dictates, whereas their Western counterparts have been adhering to liberal ideas about international politics…

The United States and its European allies now face a choice on Ukraine. They can continue their current policy, which will exacerbate hostilities with Russia and devastate Ukraine in the process — a scenario in which everyone would come out a loser. Or they can switch gears and work to create a prosperous but neutral Ukraine, one that does not threaten Russia and allows the West to repair its relations with Moscow. With that approach, all sides would win.

The West took the opposite fork in the roadway. It dead-ended in war.

Yet today we take some measure of solace…

The hounds of war are running loose. If military conscription looms, we shall be exempt — for reasons beyond our disqualifying age, our dilapidated knees and dysfunctioning kidneys.

We are not fully or partially vaccinated. And the United States military insists upon full vaccination.

And as a certain Heidi Briones chuckles:

“Only the vaccinated will be drafted. Joke’s on you.”