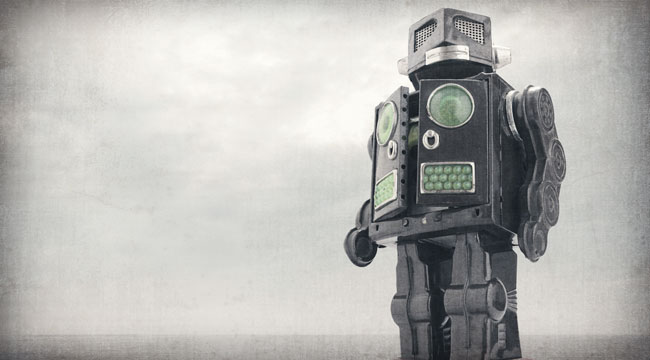 Profit Potential from the Robot Invasion

Robots are coming to destroy you.

I’m not talking about a sci-fi movie. I mean real life — right here, right now. But don’t worry, these robots aren’t going to kill or enslave you (at least not yet).

Human beings just like you are becoming obsolete. No, the robots aren’t coming for your soul. Instead, they are looking to take your job…

“Amazon, Facebook, Google– all the big players see robots, drones and automation in their long-term goals that could make the current unemployment rate feel like a cakewalk,” explains Rude researcher Noah Sugarman.

Remember Google’s recent Boston Dynamics acquisition? That’s the company that makes absolutely terrifying robots for the military that look like something out of the Terminator movies…

“As it happens, Boston Dynamics was just one of eight robotics companies that Google’s bought in about a six-month span,” Noah explains. “This is all part of the company’s big plan to create a new generation of robots – primarily in manufacturing and retailing where there’s still a fair amount of manual jobs ripe for automation.” 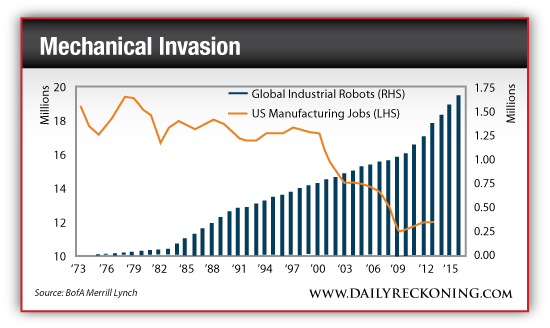 “The race is on to destroy what little remains of the U.S. manufacturing sector,” Noah declares, “with other industries like automotive, food, beverage, electronic, medical device and pharmaceuticals all standing as pretty big targets.”

Sure, this all sounds pretty bleak for the average worker. But you don’t have to spend the rest of your unemployed life in a soup kitchen line—not if you know how to play this powerful trend.

Just check out consumer robotics. This high-tech niche now makes up a $1.6 billion industry, with task-oriented robots accounting for roughly half of it. That’s according to ABI Research, whose analysts see sales tripling to $6.5 billion by 2017.

The ongoing shift to automation will dramatically change the shape of the work force. And from the top-down, many companies are looking to dominate these robotic markets.

P.S. The ongoing shift to automation will dramatically change the shape of the work force. And from the top-down, many companies are looking to dominate these robotic markets Sign up for The Rude Awakening for FREE today to discover how you can trade stocks in this sector for huge gains…

After the smoke cleared Monday morning, the latest round of this oversold bounce pushed crude’s 3-day gain over 25%, after dipping below $44 early on. It ripped higher by midday, gaining 6% by early afternoon. So oil’s unexpected rebound is stealing all the headlines heading into a brand new trading month.