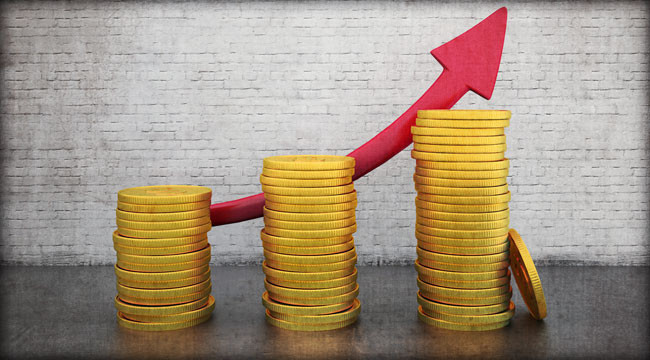 I spent this past Thanksgiving traveling in the Middle East and Africa. No mashed potatoes and turkey for me; my Thanksgiving repast was chicken, lamb and rice at a Persian restaurant (menus in Farsi!) in Doha, Qatar, before flying to Turkey the next day.

During my trip, I spoke with many people who mine basic materials, like copper and zinc. These people are well-connected with users and supply chains across the globe, and they think that the world is ready for a breakout in basic materials.

In essence, after several years in the investment doghouse and despite a widespread sense of global economic doom and gloom — like Eurozone blues, a cash crisis in India, China’s capital crisis and more — there are dollar-signs ahead in this basic materials space.

In the U.S. and Canada, we’ve seen global optimism reflected in the post-election market run-up. The thinking process seems to be that, with President-elect Trump coming soon to the White House, and his campaign promises to Make America Great Again by rebuilding infrastructure, we’re looking at good times for companies that produce basic things like cement, steel, aluminum, and heavy machinery.

But while Trump’s rebuilding plan is one big element of the basic materials resurgence, there’s a deeper story here, too.

If you’re new to the natural resource space, particularly with respect to basic materials, you need to know that it’s been a tough six years. Since 2011, the fortunes for many a mining firm have faded. It’s a long story. But the short version is that overbuilding in the early/mid-2000s led to gross oversupply, and then a price crash. To illustrate, here’s a chart that shows several large names in the mining space, showing the depths of decline. 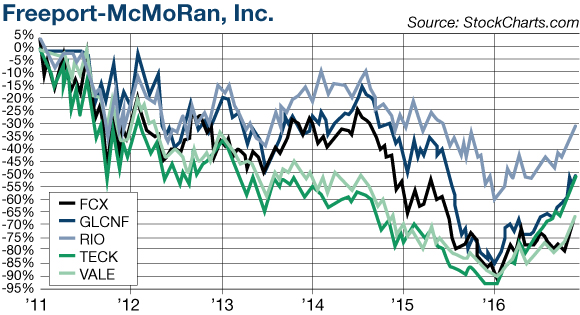 Between the beginning of 2011 and early 2016, many of the great names in mining went through the wringer. For example, Teck Resources lost 95% of its market value. Mining firms like Vale, Glencore and Freeport McMoRan also lost 80–90% of their value. Only Rio Tinto held up relatively well, losing “only” 60% of its market cap at one point.

But as you can see in the chart, the current mining revival began early in 2016, long before Donald Trump won the U.S. election. For most of the year, while the “smart money” bet on Trump’s opponent to win, the fortunes of basic material producers have been on an upswing.

Why? It comes down to fundamentals of supply and demand.

First, the supply chain. What the chart doesn’t show you is how much corporate pain the mining space underwent during its decline. As share prices fell due to over-production from over-built facilities, many companies were forced to slim down. They closed mines, laid off workers and sold assets and equipment.

Indeed, management teams did everything possible to pare costs to the utter bone. It’s fair to say that the companies we see today bear little resemblance to what they were just five years ago.

Because of that, we’re looking at much leaner companies today. They adopted every cost-avoidance technique that could possibly be available.

This has caused effects in the supply chain as well. Many formerly marginal mines are closed, and will likely not reopen. That is, some of these old mines were producing on inertia, simply because they were there; but once closed, it’ll never be economic to reopen them. At the end of the day, we’re now staring right into the abyss of shortages in certain commodities, which creates opportunity, if you know where to look.

What about demand? It’s out there, to be sure. In the past few years, for example, global auto sales have been strong, and a key component of autos is steel — meaning steel galvanized with zinc. We’ve also seen steady demand for zinc-based products in construction. Now we’re looking at the looming boom for infrastructure (and zinc) under incoming President-elect Trump.

The charts below show this phenomenon better than I can describe it. Here’s the five-year chart of warehouse levels for zinc, showing a significant de-stocking trend. 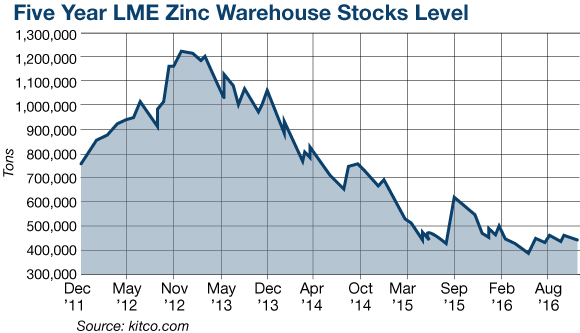 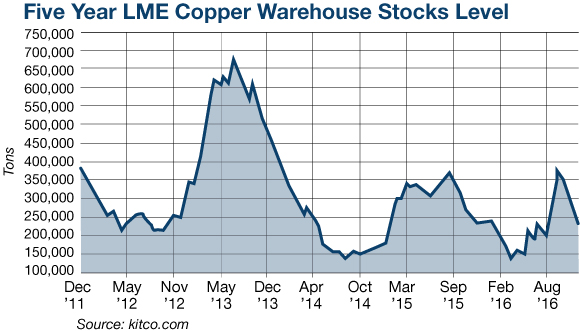 Copper, too, is near a long-time inventory low, although not as dramatic as with zinc. Here’s that five-year chart.

In my recent travels, I focused on the copper-zinc space, speaking with people at the mines. I saw one particular copper-zinc mine — which also produces gold and silver — up close. Here I am, at the edge of this mine, with the mine geologist.

My takeaway from all this is that it’s time to focus on basic materials, to preserve and grow wealth over time. This is why you can profit from gold in a January revival. 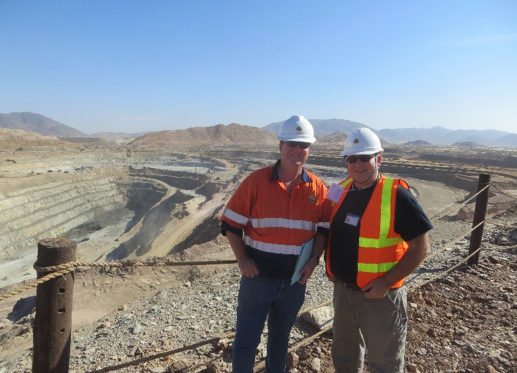 Byron King on Right at Mine in Africa

We’re in a period when people within the mining industry understand what’s going on, but most of the market hasn’t caught on yet.

The facts are clear, though; there’s a looming problem of supply chain shortages, and that will translate into future pricing strength for basic elements, whether from continuing auto sales or Trump’s infrastructure plays.