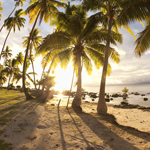 “Always buy land after a coup,” said Aren Nunnink, an Aussie expat who moved to Fiji back in 1987 and is now the most knowledgeable real estate agent on the islands.

Aren ought to know about buying land after a coup. He has taken his own advice, and it’s made him a wealthy man.

Aren told a group of us his tale at the Capitalist Exploits private investor conference in Fiji. Chris Tell and Mark Wallace started Capitalist Exploits and write a free e-letter about their global hunt for investing ideas. They focus on private deals and have come to love Fiji, which they call their favorite place on Earth. I met them recently through an introduction from a mutual friend, and we hit it off immediately. They invited me to attend their Fiji conference and, not one to pass up an opportunity to check out a new market, I eagerly agreed.

I found Fiji a fascinating, if sleepy, market. It is a great place to hide out if you worry about Western civilization as a going concern. Way out in the South Pacific, Fiji is far away from just about everybody.

Of course, there are the coups. Fiji has had four in the last 25 years. The latest was in 2006. But these are opportunities, Aren maintains. He has the personal story to prove it.

I will skip over the details, but the bottom line is that Aren was able to buy 120 acres of prime beachfront property for about $88,000 Fijian dollars (about US$50,000) following the first coup in 1987. Since then, he’s sold about $3 million worth of property and still owns a third of it.

“It’s become my model for business success,” he said. “I became quite successful and wealthy because of this. I came to the conclusion that you should always buy land after a coup. Fiji has blessed me by having four coups. After every coup, I’ve bought more land. I actually own lots and lots of land around the Savusavu area.”

Later, over cocktails, I asked Aren more about his experiences with post-coup investing. People learn, he told me. With each coup, the deals are not quite as good as before, because people have learned the values come back.

But the coup dynamics still work. After a coup, there is, as you can imagine, a tremendous loss of confidence. Lots of people want to sell, and prices fall off the cliff. Confidence, though, comes back very quickly. “And because the product [in this case beachfront property] is rare, it very quickly shoots up again,” Aren says.

Fiji had its last coup in 2006. But business and life go on. The military promises elections in 2014. That could be a little value-unlocking event in itself.

Aren is a good storyteller. He told us how it was when he came to Fiji. There were no real estate agents. If you wanted to sell a piece of land, you had to tell the taxi drivers. Then when people arrived, the taxi drivers would tell them about the land. If they helped you sell the land, you paid them a commission.

In fact, there is still a legacy from when this was the case. One of Aren’s largest competitors is called Hussein Taxi & Land Tours. “I trained him,” Aren said. Hussein once worked for Aren, and they sold quite a bit of land together. Hussein, apparently, decided to go into the business himself.

Anyway, Aren’s knowledge of Fijian history was impressive, and he took us through some of the highlights, including the history of freehold land. It’s a long story, but the short of it is that native Fijians own 93% of the land and are the only ones legally entitled to own that land. The remaining land, about 7% of the total land area, is freehold. That’s what foreigners can own.

Many of those foreigners are so-called “haven buyers.” Aren said he recently sold 800 acres to a guy who “doesn’t believe in chemicals” and wants to grow organic food and live “a natural lifestyle.” He wants to get away from the over-industrialized world, as he sees it.

Haven buyers “want to get away from something,” Aren says. “They know Fiji is sustainable. There is plenty of food and water. You can survive here. Life will continue even in times of stress or apocalypse.”