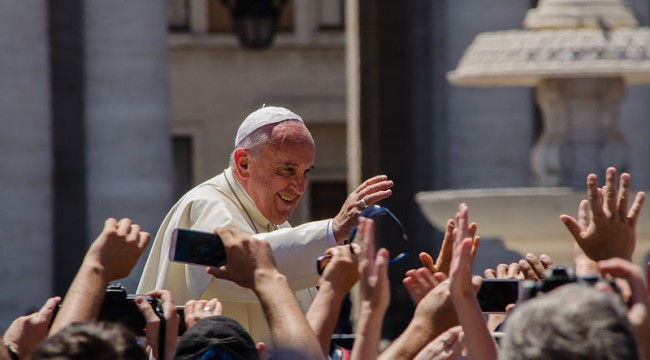 Pope Francis Takes the Zombie Side

The press reported “growing confidence.” Investors believe the cronies have things under control.

In China, the government has had some success in arresting the plunging stock prices, thanks to a barrage of interventions.

And Greece and its creditors have kicked the can down the road so many times most investors are losing interest.

But the Great Zombie War goes on…

Even Pope Francis has got involved… (More on that below.)

It is the great conflict of our time. It will determine who runs the world economy – free markets or cronies? It will also determine whether the world’s people get richer… or poorer.

Neither zombies nor cronies create wealth. They focus on redistributing it… to themselves.

And as long as they are in charge, global economic growth rates will be slow… or negative.

Here’s the latest on what has happened in Japan’s zombie economy. From Bloomberg:

Prime Minister Shinzo Abe came to power vowing to drag Japan out of deflation and stagnation. His logic was that rising prices would drive higher salaries and increased consumption.

More than two years on, prices are rising, but wages adjusted for inflation have sunk to the lowest since at least 1990.

That’s right. The Japanese – advised by Paul Krugman – have wiped out a quarter-century of wage growth.

Like the poor, zombies will always be with us. But the more of them there are… the harder it is to support them.

They fight tooth and nail to hold onto their ill-gotten gains. But as the economy slumps, there are fewer gains to be gotten.

Hear that? It’s the sound of Hillary’s whip cracking…

Yesterday, the battles were largely a “war of words” in which all the words were either dishonest or ignorant.

Presidential hopeful Hillary Clinton came out on the side of the cronies; no surprise there. She had these dishonest words:

Many Americans are making extra money renting out spare rooms, designing websites, selling products that they designed themselves at home, or even driving their own car…

…raising hard questions about workplace protections and what a good job will look like in the future.

She went on to say that she would:

…crack down on bosses that exploit employees by misclassifying them as contractors or even steal their wages.

The new economy – the non-zombified economy – wants to treat workers as independent business people, contractors, and partners, rather than employees.

Uber, Lyft, Airbnb, Internet-based consultants and freelancers – all allow people to work as they please, without punching a clock or submitting expense reports.

People work where they want… when they want… and how they want. But the cronies and zombies want to put a stop to it.

And if they can’t find some regulations that are being violated, they’ll write some more. After all, that’s what regulations are for!

And now, Hillary is proposing to “crack down” so she can keep working people where she can control them – as wage slaves.

Greece isn’t the only place we’re seeing zombies… now they’re in the Vatican!

Meanwhile, Pope Francis is like the typical foot soldier in any war. He has no idea what the war is all about.

He thinks he sees injustice – the fact that some people have more stuff than others. And he believes there is a solution: Governments need to do something!

We have searched the published reports; we can find no way to explain or understand the Pope’s pensées.

He believes wealth inequality is the result of greed and that it creates a kind of “new colonialism,” whatever that is supposed to mean.

The rest is like so much random obiter dicta, slogans, and clichés – there’s no real meaning in them.

What is the harm in being poor? As long as you have a roof over your head, enough food to eat, and cable TV, you’re okay.

Poverty is an honorable estate. And there is no reason why we should all have the same amount of stuff.

None of us knows how much stuff God wants us to have… or how much is actually good for us. And Jesus was on the other side. For him, less was more, because the rich would have trouble getting through the “eye of the needle”… and so forth.

And where is the evidence that intervention helps? Would more money do the poor any good? Would they be happier? Healthier? Would their souls go to Heaven more readily?

It must be that having more stuff is an end in itself. This may be what people really want, but it is a strange thing for a Pope to suggest.

And so, God’s man in St. Peter’s has taken the zombie colors.

And that’s a big boost to the zombie side…

There’s nothing they would like better than to have their motives cloaked in universal “greed”… their methods hidden in the swirling dust of “anti-capitalism”… and their future assured by more regulation and income distribution.