The Pie Is Shrinking for the 99%

As I keep saying: the status quo has locked the working and middle classes out of today’s economic benefits.

The reason why the status quo has failed and is fragmenting is demonstrated in wages, employment and assets: wage earners (labor) are in a rowboat trying to catch the yacht of those who own assets (capital).

If we go back 38 years to 1980 — an entire lifetime of work — we find real (adjusted for official inflation, which seriously understates big-ticket expenses such as rent, healthcare and college tuition/fees) wages have notched higher by $10/week — a gain of $500 annually.

If we adjusted wages by real-world income, we’d find wages have declined since 1980 and 2000.

Here’s employment by age group since the year 2000. Those who can’t afford to retire are still dragging their tired old bones to work while employment for the under-55 cohort hasn’t even returned to the levels of 2000. 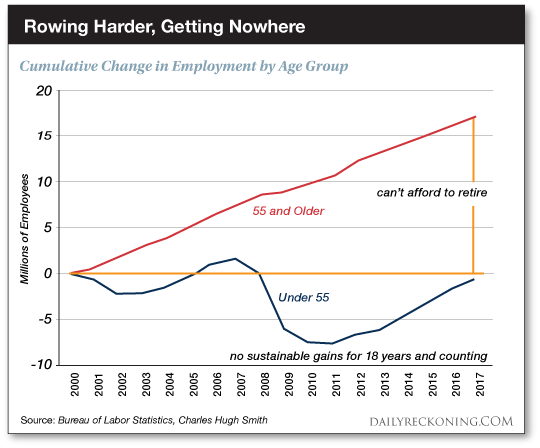 Meanwhile, asset valuations have soared. Those who own capital (assets) have done very, very well, those who trade their labor for dollars — they’ve gone nowhere.

Households with two regular jobs could afford to buy a house in Seattle, Brooklyn, or the San Francisco Bay Area in 1995. By 2005, they were priced out. Can a household with median income ($59,000 annually) afford a crumbling shack in any of the white-hot housing markets? You’re joking, right?

The cold reality is wage-earners are tugging on the oars of a water-logged rowboat, trying to catch up with the sleek yacht of asset owners. The system has been rigged to reward those who own assets (capital) or who can borrow immense sums of nearly-free money (credit) to buy assets.

Can we be bluntly unpolitically correct for a moment and observe that the rowboat is never going to catch the yacht? No wonder the nation’s savings rate is near-zero; most households don’t earn enough to save much, and those that do are caught up in a nightmarish Red Queen’s Race in which they save $10,000 a year but the asset they hoped to buy rose by $50,000.

In other words, trying to save enough by pulling on the oars of a rowboat for 10 years while the yacht has accelerated and is now on the dim horizon is a fool’s game.

As I keep saying over and over: the status quo has pested the working and middle classes. The laboring classes have no stake in America’s status quo except their entitlements and whatever assets they bought 20+ years ago around 1994-97. Those who weren’t able to buy assets 20 years ago have been in the wallowing rowboat watching the yacht pull farther away every day.

Even households making double or triple the median annual income ($120,000 to $180,000) are struggling to keep up in high-cost regions. This reality is driving social discord that will morph into social disorder.

In the 21st century, the expansion of the pie stagnated, and for many, it reversed. Adjusted for real-world inflation many households have seen their net incomes and wealth decline in the past decade.

Despite the endless media rah-rah about “growth” and “recovery,” it is self-evident to anyone who bothers to look beneath the surface of this facile PR that the pie is now shrinking. This dynamic is increasing inequality rather than reducing it.

If you look at productivity, you see a strong correlation with speculative investment bubbles (the dot-com and housing bubbles 1995-2005) and speculative spikes fueled by central bank monetary stimulus (2009-10). Absent bubbles and monumental excesses of central bank stimulus, productivity quickly sinks to its secular trend line: downwards.

If you look at the long-term trend line of productivity through all four industrial revolutions, you’ll see the decline concurrent with the 4th Industrial Revolution (mobile telephony, the Internet, AI, robotics, peer-to-peer networks, etc.) and the depletion of cheap-to-access-and-refine oil:

The unwelcome reality is that the economy is changing in fundamental ways that cannot be reversed with policy tweaks, protests or wishful thinking.

Consider the percentage of the gross domestic product (GDP) that goes to employee compensation (wages and salaried). Labor’s share of the GDP has been in a downtrend since 1970, which not coincidentally was the peak of secular productivity: 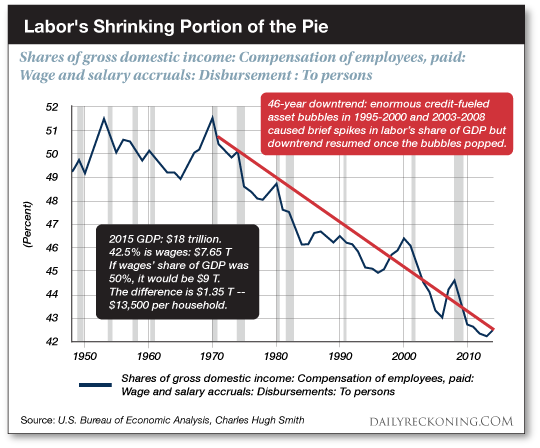 In the distribution of wealth in the U.S., we find the same correlation to the downtrends in productivity and labor’s share of the economy. The bottom 90% of households’ (the many) share of the wealth pie topped out in the early 1980s and has declined precipitously since, while the wealth of the top 0.1% (the few) has more than tripled since the late 1970s.

This next chart depicts the remarkable (and recent) spike income growth the few have recently enjoyed, at the expense of everyone else: 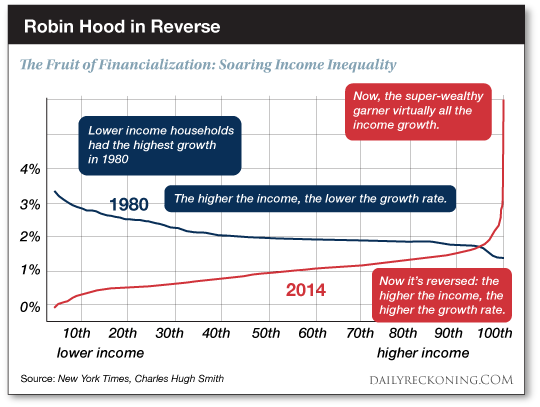 The increase in wealth and income inequality and the decline of productivity and labor’s share of GDP are the result of structural changes in the economy, changes with far-reaching consequences.

While it’s appealing to identify policies endorsed by self-serving insiders and elites as the source of these changes, that is far from the whole story. Much of this growing asymmetry stems from profound changes in the global economy that depreciate labor (as conventional labor is no longer scarce).

They also increase the gains of the top few in a “winner take most” allocation that benefits speculation, leverage and new ways of organizing labor and capital that reward the organizers far more than the users/participants.

In this new era of a steadily shrinking pie, the sources of inequality and related social problems have also shifted. As a result, the social movements that were effective in the past are no longer effective today. Attempts to address rising inequality with the old tools are fueling frustration rather than actual solutions.

Meanwhile, our existing models for social change have slipped into ineffectual symbolic gestures that fuel fragmentation and frustration — and that will lead to a dangerous boiling over of the 99% against the elites controlling the system.

When that happens (inevitable on our current trajectory), the ensuing social disunity and disruption will be of the sort many alive today have never seen.

On that happy note, enjoy the rest of your weekend!