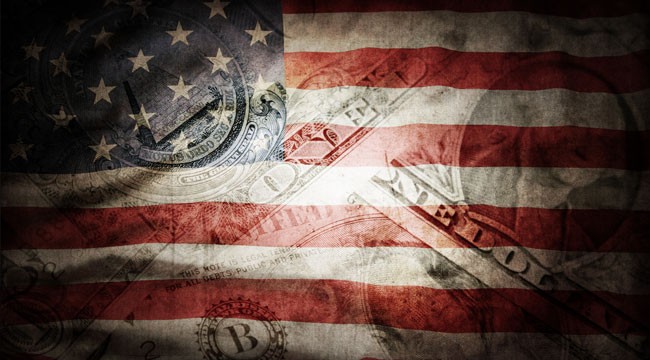 Peter Thiel seems an unlikely source for such an important monetary insight. He’s a hedge fund manager and venture capitalist. He was the first outside investor in Facebook. And perhaps most famously, he’s one of the co-founders of PayPal.

Then again, maybe he’s not so unlikely a source. PayPal, after all, is a payment system. In those days, Thiel thought deeply about money. Why people would accept PayPal as a payment system. And how it would link up with banks and credit cards.

“When I was pitching PayPal back in the early days,” Thiel told Ezra Klein at Vox, “I would hold up a $100 bill in front of an audience. It was this hypnotic effect; everyone paid attention to me immediately. Money is a very mysterious thing… so how does it work?”

What got Thiel on the subject was Klein’s question about the prospects of Bitcoin. Most people think of Bitcoin as a kind of stateless digital currency. But it is really a payment system.

Here, Thiel gave the right answer, in clear terms, to his own question, and consequently, why Bitcoin is no threat to the U.S. dollar:

“You will not be able to pay your taxes in Bitcoin. You have to pay them in dollars. If you don’t pay them with dollars, there will be people who will show up with guns to make you pay them.”

Coercion is what holds the U.S. dollar system together. “Tax-driven money” is the phrase that economists use to describe the theory. It applies to all sovereign currencies — such as the yen, the euro and China’s renminbi.

This does not mean that people accept dollars only because they have to pay taxes. It means that the existence of taxes is sufficient to create demand for a currency.

Coercion is what holds the U.S. dollar system together…

The idea that taxes drive money is not new. German economist G.F. Knapp wrote a book about it in 1905. British diplomat Alfred Mitchell-Innes independently arrived at the same set of ideas in a pair of brilliant papers in 1913 and 1914. You can find elements of the approach at least as far back as Adam Smith.

Yet the twists of history pushed these ideas to the fringe.

Nonetheless, it is vital that you grasp this idea if you want to understand how the modern monetary system works. Once you see that taxes drive money, all kinds of other insights open up to you. For one thing, you see that what dollars are made of has nothing to do with the dollar’s acceptance as a currency.

An analogy would be a movie ticket. It doesn’t really matter if the movie ticket is a pink piece of plastic, a leather disc or a piece of paper. As long as the theater accepts it, it’s good. It doesn’t even have to take physical form at all. You can see now why talk about “worthless paper money” is silly.

Even under the gold standard this was true.

Most people think that under a gold standard, the currency’s value came from the metal itself. Proof that the truth is otherwise lies in the fact that gold and silver coins traded at the value set by the sovereign (or issuer), well above the actual value of the metal. It had to be this way; otherwise, people would just melt the coins. But there was something else at work. As economist L. Randall Wray tells it:

“Normally… coins would circulate at the higher nominal value set by the sovereign and enforced by the court and the threat of severe penalties for refusing to accept the coins at that value [rather than the value of the metal content of the coins].”

Once again, it is coercion at work. The government could have picked anything and made it money by enforcing a tax that could be paid only with what it chose to be money.

As the U.S. government is the sole issuer of dollars, you come to realize something else. In order for people to pay taxes, the government has to spend the money first. Logically, then, taxes do not finance government spending. Here is more from Wray in his Understanding Modern Money:

Naturally, this leads to a radically different way to think about government spending. If the government is the sole provider of dollars, how does the private sector accumulate savings in dollars?

The only way is for the government to spend more than it takes in. Again, here is Wray:

“Because the public will normally wish to hold some extra money, the government will normally have to spend more than it taxes; in other words, the normal requirement is for a government deficit.”

As a reader of The Daily Reckoning, this idea is probably hard for you to swallow. Everything you’ve been taught tells you otherwise: that deficits are unsustainable and that taxes finance government spending. And the government is broke.

On the contrary, in the current system, a deficit is normal. Taxes do not finance government spending. And the U.S. government is in the best financial shape it can be in, because all of its liabilities are in dollars… and it prints dollars!

There are limits to all things. Excessive deficits can cause inflation, for example. And I’m not saying government spending is a “good” in and of itself. In fact, this seems an appropriate point to interject something important…

It can be hard to have an intelligent discussion with people about these ideas, because they get angry and want to tell you how the world “ought” to work. So I always feel the need to say, somewhere in pieces like this one, that I am not endorsing the current system. It is what it is. My goal is to understand it. I have zero interest in policy in general. I want to make sense of what’s going on.

Tax-driven money is just a first step, though a big and important step, to understanding how the modern monetary system work. That’s not the main thing I do in my publication Mayer’s Special Situations.

But it’s a useful tool to getting a bead on the big picture. Besides, it’s fun to knock over the mainstream’s view of how money and credit work. Although, with Peter Thiel talking about tax-driven money maybe these ideas are on the cusp of going mainstream after all.