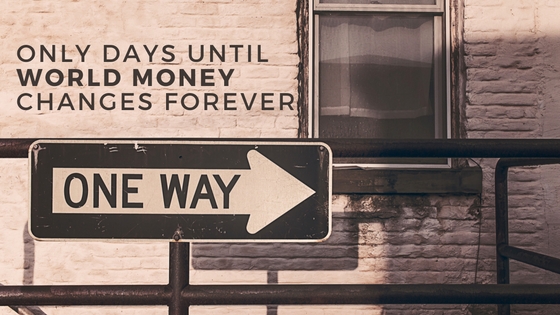 The International Monetary Fund (IMF) has established a plan for its special drawing rights (SDR) valuation basket to be revised at midnight on September 30. This IMF plan has laid the foundations for a new monetary standard based on world money.

There’s a formula for determining that, and as of today there are 4 currencies in the formula: dollars, sterling, yen, and euros. Those are the 4 currencies that comprise in the SDR calculation. As of the close of business on September 30th, or in effect when we wake up October 1st, there’s going to be a fifth currency added, which is the Chinese yuan.

The Chinese yuan does not meet the typical SDR criteria, so it would not normally qualify. However, this is a political decision by the IMF attempting to get China on the bus. In the 1960s we had an expression, “you’re either on the bus or off the bus,” and right now China’s off the bus but as of September 30th they’re going to be “on the bus.” They’re going to be part of the SDR.

Does that mean the dollar becomes worthless overnight? Of course not. You’re going to wake up October 1st, you’ll still have dollars in your pocket, you’ll still get paid in dollars, those will be worth something, but it will be a very significant turning point.

We will look back on that date a few years from now we’ll look back on September 30th, 2016 and reflect, “That was the day the dollar began its demise.” Officially that’s when the Chinese yuan was put into the SDR and the SDR gained the backing it needs from the emerging markets, from China and from the BRICS, to become the new world money.

It is definitely possible to see that coming. It will play out in stages. It doesn’t happen overnight, but it is one of those turning points. There are a lot of way to get ready for this, but don’t wait until it happens when the whole world says, “too bad about the dollar.”

This will be a key turning point. It’s one of those days when it should prompt people, really starting now, but certainly not later than September 30th, to act.

Here’s the point. The SDR world money, as I mentioned, is a “basket.” Today there’s 4 parts of the basket. In the future there will be 5 parts. The one that has been designed, the synthetic SDR, has the 5 parts because we know China’s coming in, we even know what their percentage is going to be.

What the SDR does is it takes you out of the currency wars. A lot of people are getting whipped around, with volatility for which they’re not getting paid. They’re having occasional large losses based on the currency wars.

The currency wars are not going away. Because you’ve got all 5 major currencies, it neutralizes the currency war activity and gives you a plan going forward.