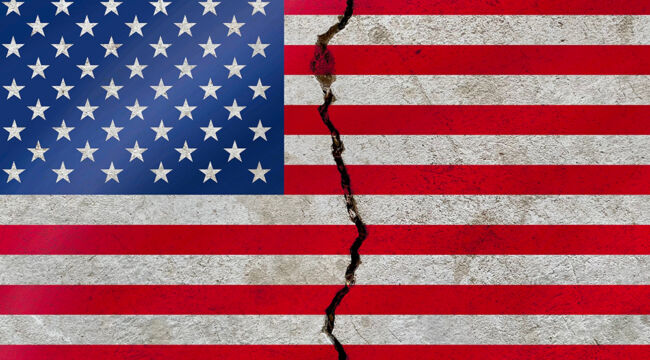 Sometimes the utterly unthinkable becomes a reality and, to everyone’s surprise, it works out better in the end.

Such is the case with large nation-states that split up based on geography, language and political values. No disaster befell Czechoslovakia when it became the Czech Republic and Slovakia. The moving around of borders and jurisdictions is part of the trajectory of history, even if every generation believes that what exists now should exist forever.

And then suddenly it does not. We tend to think breakups happen to other countries but not here at home. And yet the U.S. is at least as fractured now as many unviable nation-states of the past. We seem to be nearing the point where a single rule for everyone no longer makes sense.

The political stability of the United States is a particular sore point, given the 19th-century experience with an attempted breakup. There had been many prior threats to end the union but after the Northern victory, the idea of manifest destiny became entrenched and so too did the notion that the U.S. is the one indispensable nation, forever to be exactly the way it is.

A friend from a foreign land asked me why Hawaii is part of the U.S. The answer is obvious: conquest. Alaska was different: a commercial transaction that ended up as part of the union some 10 years into the Cold War as a security measure. Otherwise, it’s hard to make sense of these two states as wonderful as they are.

The U.S. was formed out of 13 colonies, beginning as a loose confederation with no operational central government. That came 12 years later. Generally, it has worked, and worked best when the system functions as it is supposed to: checks and balances; juridical limits on the powers of everyone, including the judiciary; and a high respect for the decentralized structure that leaves most political decisions to the states.

How much strain is this under today and what might happen? Could it break up? It’s not something to rule out. Moreover, it might be the most peaceful and prosperous path toward solving the intractable political problems in this country.

It doesn’t mean war. It doesn’t mean economic isolation. It merely means a greater degree of self-governance than we currently have. Handled properly (which is of course highly unlikely) a breakup could be the best step forward.

The advent of huge nation-states has an ancient origin tracing to the imperial ambitions of much-vaunted leaders seeking to make their mark on history. The modern origins of such things has a 19th-century root in a different idea: Geographically large states are better at making wealth than smaller ones.

The internal markets can be more diverse and robust with better control over the rules of the game. They can be more internally self-reliant and better protected against invasion.

Whether and to what extent that was true, technology today makes such arguments far less relevant. The problem of geographic proximity is ever less a concern in a digital world in which location is not as relevant as access to a network. This reality makes geographically noncontiguous political arrangements more viable than ever before.

In this way, it is no longer a necessity to be trapped inside the political territory of your residence. Many public services can become subscription models. And whether and to what extent those subscriptions pertain to geography as such — water, fire, ambulance — all depends on the service in question. Law and litigation need no longer be restricted by proximity.

The rise of the gigantic American territorial state coincided with the advent of universal public schooling and compulsory attendance laws. People these days forget that we haven’t always had those.

The main purpose was to instill civic values that preached the importance of compliance, unity and conformity. Not everyone went along but over time, they triumphed mightily. They might have been inefficient and often nonperforming but they achieved their real purpose.

Until two years ago. Unthinkably, they shut down. It was an enormous error even from a ruling-class point of view because it introduced the whole of America to the possibility of other options. Homeschooling was under a cloud and then suddenly it was mandatory. Parents did not like what they saw on Zoom and millions of people are now out in full force to push a change at the local level.

There is poetry here. The public schools are now under pressure as never before, which means that a central pillar of the unitary nation-state is suddenly in question. There are already many bills in Congress that would finally abolish the Department of Education. It’s way past time to do so.

Another factor in the building of large unitary states was the belief that the nation-state money would obtain more power and reach the more people who used it. This happened in the U.S. for sure, and it was in many ways a betrayal of history.

In the early 19th century, all monies in the U.S. were based on gold and silver but foreign coins circulated freely. Most monies in the world have different names for the same thing. They cobbled together a central system of coinage by the 1880s and then a central bank by 1913. By 1971, the gold backing was gone.

No question that the dollar has benefited from the large state but we now have new ways of doing money and finance too and they are ever less dependent on geography. Any currency can become any other currency with a few clicks.

And if crypto currency really is our future — and a private form of money circulates alongside a public one — this reasoning behind a unitary state has fallen apart.

Forget about the whole FTX saga. That’s just a temporary blip and is actually healthy for cryptos in general because it’ll shake a lot of frauds out of the tree.

Not Soon but Maybe Later?

The political divisions in the U.S. have become an enormous distraction from what should be the main job of individuals and communities in society: building better lives. That happens not through the game of capturing power and control from the other tribe but through finding ways to cooperate with others in the great project of finding peace and prosperity.

A nation doesn’t necessarily have to be forced. You can still feel like an American but have full citizenship in one of 20, 50 or 500 smaller states, each of which can have its own constitution, court system, legislature and chief executive.

Nor would this mean the end of liberalism as it is historically understood. Peace and friendship can prevail between people of different political loyalties and attachments.

The transition from here to there could be painful, to be sure, but things are very painful as they are, as multiple tribes continue to tear each other apart in the great mission of grabbing the brass ring of power. It was not supposed to be this way. But the centralization and betrayal of the founding principles made it so.

My father was a great American patriot but he was also friendly to the Texas secession movement. I’m pretty sure that he favored it. Many Texans do, and the same with many in blue states too. The federal government as we know it is not the right technology for making a peaceful and prosperous world of tomorrow.