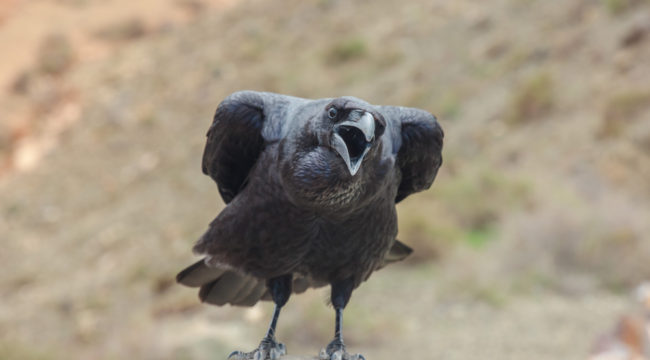 An Omen of Global Collapse

While the media fixate on Dow 20,000… who’ll build “the wall”… and Trump’s latest treason against the decencies… the next global financial crisis may be quietly unspooling.

“The world doesn’t realize it yet,” fears independent analyst Steve St. Angelo of the SRSrocco Report. “But the implosion of the global markets has started and can’t be stopped… While this may be slow at first, it will pick up speed over the next several years.”

Why’s this fellow croaking such a brassy tune? The answer shortly. But first, a check of the markets…

Stocks took a random walk into red territory today. Dow, S&P, Nasdaq, all down. But not much. The Dow’s still holding the line north of 20,000.

Oil’s off a hair. Gold’s down a few bucks.

In the absence of a gold standard, the modern economy runs largely on credit. The Daily Reckoning’s Richard Duncan argues for example that credit must increase 2% to avoid recession.

But Fitch Ratings reports that global credit growth slowed last year to its lowest level since the financial crisis in 2009.

And St. Angelo thinks the contraction represents “the popping of the massive inflationary asset bubble” that began inflating after 1971. That, curiously enough, is the year Nixon closed the gold window and ended Bretton Woods.

Jim Rickards has recently raised hackles by showing that China’s going broke burning through its dollar reserves. It’s doing so to support the yuan and halt capital flight out of the country. Jim says China may have only about a trillion dollars left in spendable reserves. The rest are tied up.

Why’s all this important?

Foreign countries build dollar and other currency reserves to support their own currencies and power domestic growth. They sustain credit growth. As investor Hugo Salinas Price notes, “All ‘money’ today represents debt: fiat money comes into existence as the counterpart to the creation of a credit.”

And a lot of that money meandered its way into the financial sector and inflated the stock market. What’s the Dow again?

Price spends his time tracking international reserves. Those dollar reserves had been building since the early 1970s (again, when Nixon closed the gold window). But his data show that the growth rate drooped in 2011.

The trend, starting in 1971, has now gone into reverse. Look: 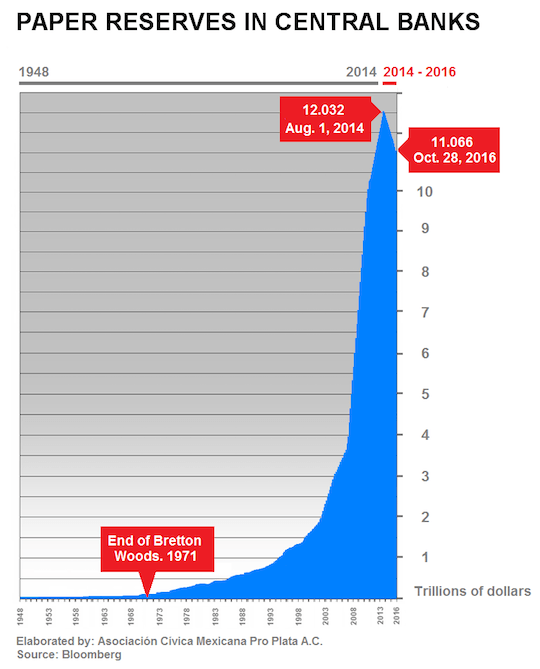 But here’s Price on its true significance:

The falling international reserves are really the contraction of credit in the world.

True, $11 trillion is far from zero. And the dollar remains the world’s reserve currency, bar none. It won’t collapse tomorrow. But as Price notes, it’s the trend that counts. And it’ll take a lot to reverse the new trend:

When a trend has been firmly in place in the world for 45 years, a reversal of that trend must be the result of a profound change which will produce a new trend that will not be easily altered, just as the previous trend was unalterable for 45 years.

Again, that new trend according to Price: “Deflation, contraction of credit.”

This contraction is still in the early stages. But that can change, quick as a wink: “Deflation can take place at great speed, feeding on itself as fear of losses in investments propels the public to liquidate investments as quickly as possible.”

Hemingway’s famous quote about bankruptcy leaps to mind. How do you go bankrupt? Slowly at first… then all at once.

Yesterday Jim said the global economy’s poised on a knife edge between inflation and deflation. Both creatures have been spotted. This Price clearly thinks deflation’s the real bugbear.

So what can you expect if he’s right?

We are likely to see a desperate attempt at world inflation of money through further expansion of credit… to finance government spending in order to “get the world economy on its feet again” and crush any possibility of world deflation, for the time being. Which would, of course, only postpone the final collapse of the world’s economy to some point in the future.

Postponed, that is. Not avoided. But borrowed time is better than none at all, we hazard. Please kick that can as far down the road as it can roll.

The Super Bowl’s next week, for heaven’s sake.