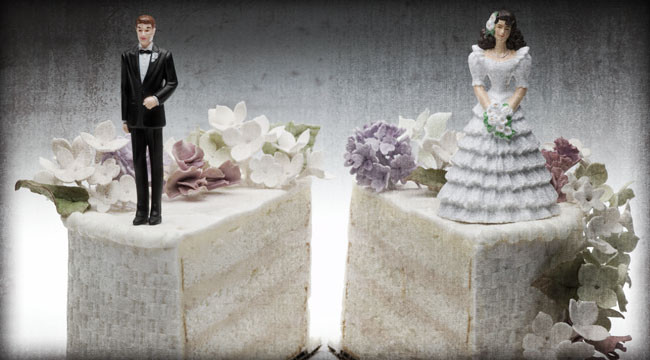 The first time I heard Nona Willis Aronowitz talk about getting divorced to save money on health insurance I thought she couldn’t really be serious. We were at Monte’s, an old Italian place in South Brooklyn, having dinner with a group of New York women writers in late July.

“Don’t do it!” I urged her, certain, having watched my friends over the years, that no matter how casually she or her husband might treat the piece of paper that says they are married, getting unhitched would inevitably change their relationship as profoundly as getting hitched in the first place.

But with the arrival of the Affordable Care Act’s insurance exchanges, the question for Nona and her husband Aaron Cassara moved from the realm of casual conversation to a real financial conundrum. Aged 29 and 32, respectively, they were facing tough times for their professions, a wildly expensive city, and the scary prospect that both of them could shortly be uninsured. Right now Nona only has a COBRA plan — “which I can barely afford” — that ends January 1, she tells me. Her last staff job ended when the media outlet she was working for laid off its whole editorial team; she’s been a full-time freelancer since. Aaron, a filmmaker who works part-time and also freelances, has been uninsured since her layoff, because it would be too expensive to have him on COBRA too.

Any married couple that earns more than 400% of the federal poverty level — that is $62,040 — or a family of two earns too much for subsidies under Obamacare. “If you’re over 400% of poverty, you’re never eligible for premium” support, explains Gary Claxton, director of the Health Care Marketplace Project at the Kaiser Family Foundation.

But if that same couple lived together unmarried, they could earn up to $45,960 each — $91,920 total — and still be eligible for subsidies through the exchanges in New York state, where insurance is comparatively expensive and the state exchange was set up in such a way as to not provide lower rates for younger people. (Subsidy eligibility is calculated using a complicated formula involving income in relation to the poverty line, family size, and the price of plans offered through a state’s marketplace.)

Nona and Aaron’s 2012 income was higher than the 400% mark, but not by much. In New York City, that still doesn’t take you very far for two people. If their most recent months of income are in the same range, they will get no help at all with buying insurance through the exchanges if and when they apply, according to the Kaiser Family Foundation and eHealth subsidy calculators. Premiums for the two for silver-level plans came in at $9,248 for the year.

But if they applied as unmarried individuals with something like their 2012 income, one of them would get at least $3,964 in subsidies toward the purchase of a plan, or possibly even be eligible for Medicaid, thanks to their uneven individual earnings that year. And if they fall below the 400% threshold, which Nona says they might this year, they could get substantial subsidies as a couple that are still worth less than what they’d be eligible for as individuals. These gaps are the marriage penalty.

Married people who are uninsured make up just a small fraction of the uninsured, for obvious reasons: It is easier to be insured if you have two potential pathways of getting there.Only 15.4% of married people were uninsured in 2012, according to research from the Kaiser Family Foundation; the uninsurance rate for “single adults living together” was more than twice as high — 33.4%.

That may be one reason the Obamacare subsidies are more generous to single people and one- or two-parent families with children in the house than to couples who lack children. They were designed to help single moms and struggling middle-class families with children, not married creative-class millennials in pricey cities who have not yet settled into well-paid work, or barring that, work for a single employer.

Health insurance isn’t the only place where there’s a marriage penalty. The federal income tax also hits married couples with similar earnings harder than couples with one main breadwinner.

“In the tax code, you have a different set of tax rates for married couples that mitigates the marriage penalty to some degree,” says Robert Rector, a senior research fellow at the Heritage Foundation who has been writing about the marriage penalty in health reform since 2010. Under Obamacare, however, there are “dramatic” penalties that are “substantial — particularly with couples in the upper age range,” he says.

“What you are doing is saying … you have to pay a penalty of multiple hundreds of dollars — a substantial portion of your income — to stay married,” Rector says. “It’s saying society is basically hostile to the institution of marriage.”

Experts on the impact of marriage penalties were skeptical that many couples would consider divorce over insurance rates. Still, there is some data to suggest that marriage penalties embedded in government programs can discourage marriage among those who are benefiting from programs that favor the unmarried.

“The received wisdom in public finance is that marriage per se can be financially discouraged if both members of a couple have decent earnings potential and would face a higher combined tax rate as a married couple than as a pair of singletons,” explains Gary Burtless, a senior fellow at the Brookings Institution. “At the lower end of the income scale, if the combined earnings potential of the couple is not very promising, marriage might prevent the mom and kids from receiving as much government assistance as they can receive if the adult couple remains unmarried.”

There’s no data yet on the potential size of the population potentially affected by such concerns under the Affordable Care Act, but Medicaid and other means-tested programs “already created that kind of potential marriage penalty,” he notes. At least half of the newly insured under ACA will be insured under Medicaid.

The great irony, Nona explains, is “we wouldn’t be married if it weren’t for a situation that happened in 2009 where he needed health insurance.”

Despite its administrative beginnings, their City Hall marriage has lasted so far. Aaron was on Nona’s insurance at first; later, when their job arrangements changed, she was on his. Now Nona is looking to land a full-time staff job, in hopes of once again having an employer-based plan that Aaron, too, can join.

“I guarantee you that in six months I will either be divorced or I will have a full-time job,” she says.

Garance Franke-Ruta
for The Daily Reckoning

Ed. Note: The best way to ensure Obamacare doesn’t negatively impact your life is to simply “opt-out” of it. And by signing up for Laissez Faire Today, you’ll gain access to 6 ways you can easily do just that. Don’t wait. Sign up for FREE, right here.

Hassle-Free Tips for Taking Care of Loved Ones

Becoming a caregiver can happen when you least expect it. And according to the Family Caregiver Alliance, about 34.2 million Americans provide unpaid care to an adult age 50 or older.