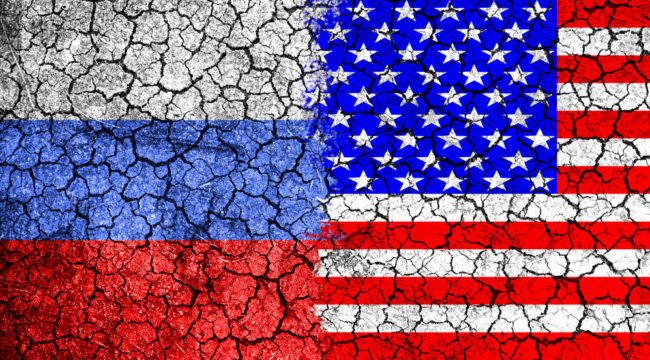 President Obama has conducted the most deleterious foreign policy of any U.S. president since Woodrow Wilson. This is not due just to a dead ambassador on the streets of Benghazi, a phony red line in Syria which led to 400,000 dead, two million wounded, and two million refugees, losing Egypt to Islamic radicals, or empowering a terrorist regime in Iran. Those developments alone are enough to rank Obama among the worst foreign policy presidents. Obama’s most egregious error is far worse – his inability to grasp the balance-of-power dynamics among the U.S., Russia and China. Yet, Obama’s blunder is Trump’s opening to rescue U.S. foreign policy from grave weakness, and restore U.S. leadership to the world.

There are three primary powers in the world – the U.S., Russia, and China. All other nations are secondary allies, or tertiary powers. In a three-power system, the object of foreign policy for a primary power is to align with one of others to the detriment of the third. A great power that does not pursue this policy becomes the victim of an alliance between the remaining two. Such an alliance need not be permanent; it can shift, as was the case with Nixon’s opening to China, which put Russia on the defensive and led eventually to the downfall of the Soviet Union.

This dynamic is not difficult to grasp. Adults playing the board game Risk know that while the game begins with six players, it quickly evolves to three survivors. At that point, it is imperative for two of the players to align and destroy the third by systematically attacking it, and refraining from attacking each other. The victim is quickly wiped from the board.

Of course, geopolitics is more complex than Risk. Players are rarely removed from the board; they are just temporarily advantaged or disadvantaged in pursuing their national goals. But, the three-power dynamics of two-against-one are fundamentally the same. Bismarck knew this. Kissinger knows it today. Obama does not.

Obama subscribed to a post-national globalist ideology, which finds no correlative in the real world outside of faculty lounges and Georgetown salons. In Obama’s worldview, nation states are a problem, not a solution. Global goals on issues like climate change, trade, the OECD’s world tax program, and the IMFs world money program require global institutions. Nation states are temporary impediments until global governance can be built through non-democratic transnational institutions.

This hard-edged realism by Russia and China combined with a lack of realism by Obama has led to the worst possible outcome for the United States. Russia and China have become deeply intertwined and are building a durable alternative to the post-war dollar-based system dominated by the U.S.

These Russia-China initiatives include deepening cooperation through the BRICS, the Shanghai Cooperation Organisation, the Asia Infrastructure and Investment Bank, the New Silk Road, and joint efforts in weapons systems and space.

Most threatening is that in the past ten years, Russia increased its gold reserves 203%, and China increased its gold reserves an estimated 570%. Such gold accumulations have no purpose other than to lay the foundation for a non-dollar based international monetary system. No great power has prevailed long without a great currency. When confidence in the dollar fails, U.S. power will fail with it.

Obama blundered because he allowed Russia and China to pursue the two-against-one dynamic leaving the U.S. as the odd man out. Fortunately it is not too late to reverse this dynamic. Signs from the new Trump administration are encouraging. Trump’s early actions and appointments suggest he understands the precarious position of the U.S., and is already moving to change the status quo.

Russia is a more natural ally of the U.S. than China. Russia is a parliamentary system, albeit with autocratic overtones; China is a Communist dictatorship. Russia has empowered the Orthodox Church in recent decades, while China is officially atheistic. Russia is encouraging population growth while China’s one child policy and sex-selective abortions resulted in the deaths of over twenty million girls. These cultural aspects – elections, Christianity, and family formation – provide Russia with a natural affinity to western nations. Russia is also superior to China militarily despite recent Chinese advances. That makes Russia the more desirable ally in any two-against-one scenario.

The most powerful argument for embracing Russia to checkmate China is energy. The U.S. and Russia are the two largest energy producers in the world. U.S. energy production is set to expand with the support of the Trump administration. Russian production will expand also based in part on initiatives led by Rex Tillerson of Exxon, soon to be Secretary of State. China has few oil and natural gas reserves and relies heavily on dirty forms of coal and some hydropower. The remainder of China’s energy needs is met through imports.

An energy alliance between the U.S. and Russia, supported by Saudi Arabia, could leave the Chinese economy and, by extension, the standing of the Communist Party of China, in jeopardy. That threat is enough to insure Chinese compliance with U.S. aims.

An emerging U.S.-Russian entente could also lead to the alleviation of western economic sanctions on Russia. This would open the door to an alliance between Germany and Russia. Those two economies have near perfect complementarity since Germany is technology rich and natural resource poor, while Russia is the opposite.

Isolation of Russia is a fool’s errand. Russia is the twelfth largest economy in the world, has the largest landmass of any country in the world, is a nuclear power, has abundant natural resources, and is a fertile destination for direct foreign investment. The Russian culture is highly resistant to outside pressure, but open to outside cooperation. Just as fifty years of U.S. sanctions failed to change Cuban behavior, U.S. sanctions will not change Russian behavior except for the worse. Engagement, not confrontation is the better course. The new Trump administration gets this.

U.S. voices such as John McCain, Mitch McConnell and Lindsey Graham are quick to say, “Russia is not our friend.” Why not? Could it be because President Obama publicly humiliated Vladimir Putin by saying he was, “like a bored kid in the back of the classroom”? Could it be because Obama proclaimed that Russia under Putin is “on the wrong side of history.” In fact, Putin’s sense of history goes back to Peter the Great. Obama’s does not seem to go back further than 1991.

Most of the tension in U.S. – Russia relations today stems from Russia’s invasions of Crimea and eastern Ukraine in 2014. But, Russia’s Crimean invasion should have come as no surprise. U.S. and British intelligence services and foreign NGOs destabilized the pro-Russian elected government in Kiev in early 2014 causing Ukrainian President Yanukovych to flee into exile in Russia.

Ukraine was always a bridge too far for NATO and EU membership. Better to leave Ukraine as quasi-neutral buffer between east and west than put its status in play. Ukraine has always been culturally divided. Now it is politically divided as well. Russia’s hand in Ukraine was forced by the shortsighted western interventions of Obama and David Cameron. Obama will soon leave the scene; Cameron already has. Putin is the last man standing, unsurprising for a man whose pursuits include martial arts and chess.

Fortunately it’s not too late to reestablish a balance of power that favors the United States. China is a rising regional hegemon that should be constrained. Russia is a natural ally that should be empowered. The U.S. has blundered in its foreign policy for the past eight years. A new Trump administration has an opportunity to reverse those blunders by building bridges to Russia, and it seems to be moving in that direction.