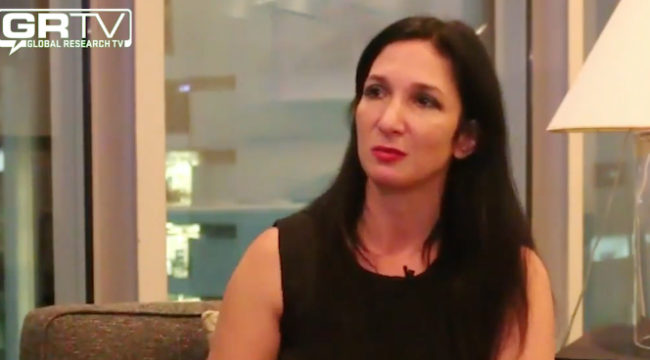 Nomi Prins joins James Corbett at Global Research TV to discuss the multipolar powers in banking and the world beyond the Washington consensus that exists today.  In their discussion, Nomi Prins hits hard on the changing landscape that once was dominated by a Wall Street and Washington stronghold.  Now, as they summarize, that power structure is under fire from competing regions of the world attempting to work independently of the US central bank stronghold, the Federal Reserve.

Nomi Prins has worked within the corridors of Wall Street and knows the hierarchy of the banking system first hand.  She was a managing director at Goldman-Sachs and also held a role as Senior Managing Director at Bear Stearns. She was also senior strategist at Lehman Brothers.  Prins is a best selling author and economic historian who is currently traveling the world and completing research on her forthcoming book, Artisans of Money.

GRTV shows work from Prins in which she puts it clearly, “The Fed clings to status quo.  Other central banks are vying to knock it down, or at least loosen its grip on them.  But the Fed behaves as if it has no idea there are other powerful central banks that want to grab and harness its power.  It carries on refusing to acknowledge that there may come a time, sooner rather than later, where its power is attacked.”

While speaking in Tokyo, Japan on GRTV, James Corbett and Nomi Prins sat down to speak on the competing interests of global central banks.  Nomi Prins told the network, “I think the biggest competitor for the Federal Reserve’s power is the People’s Bank of China.  What was going on in the post-crisis period, as the Federal Reserve was coordinating a global effort to keep rates at zero, and where the European Central Bank (ECB) and Bank of Japan have them at negative rates, was to financially support the financial system of the United States.  We are still in a period of, effectively, zero interest rates and even though quantitative easing that the Fed created is “sort of” over, the book of securities and debt that the Fed bought is still in tact.  It is still a global policy created by the Fed.”

After being asked about the growing influence of the International Monetary Fund (IMF) and world money, Nomi Prins responded, “Under Christine Lagarde, and in this shifting post-crisis environment, the IMF has elevated itself in being able to dictate how central banks act.  It was Lagarde who pushed back, when Yellen was thinking about raising rates at the Fed… You can’t because it will hurt the emerging markets, it will create more instability in the world, and that it would be a timing issue.  She has elevated herself and the IMF in the position of trying to dictate the timing of monetary policies – and this is very new.  What is also new is the idea of China coming in and having a position within the IMF’s special drawing rights (SDR).  If the IMF is able to have more bonds associated with linking to the SDR issued in SDR’s, it becomes more prevalent in terms of currency and debt relationships.”

While speaking on her latest book exploration, Artisans of Money, she notes, “My latest research is focused on the rise of alternative power and the shifts in influence of central banks.  The Artisans of Money is looking at the evolution since the financial crisis of how banking relationships are breaking down and changing because of how the central banks took a such a powerful role in dictating monetary policy, market bubbles and power they have never had before.  We are seeing a new coordinated effort that comes out of the US and amongst central banks.  I look at the relationships of the people running these central bank institutions and how they have changed.”

Check out the full interview on GRTV with James Corbett on the crisis at the Federal Reserve and the evolution of the Washington consensus – click here.