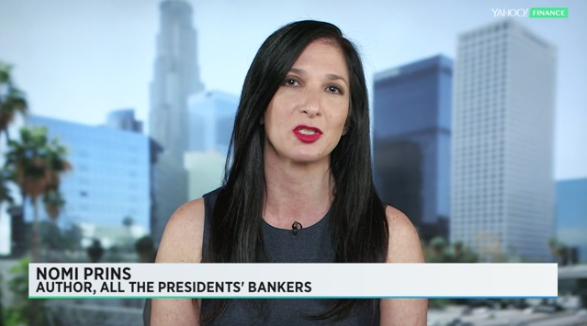 Nomi Prins joined Yahoo Finance and The Final Round’s Jen Rogers to discuss the events facing 2017 – including increased corporate defaults, market volatility and the impact of oil under Rex Tillerson at the U.S State Department.

When posed the question about economic growth and the incoming Trump administration Prins did not mince words saying, “Ultimately what is going to happen is he’s not going to be able to push a “mega fiscal budget” through a Republican Congress, nor will he try. Nor will he be able to sustain the kind of growth that he has promised. There may be a PR element, but in terms of actual conversions and the practical realities of the economy, that was weak to begin with for so many people, that’s not going to be a reality. That is going to take its toll on not just our stock market, but will add uncertainty into the rest of the world that is looking at these expectations.” 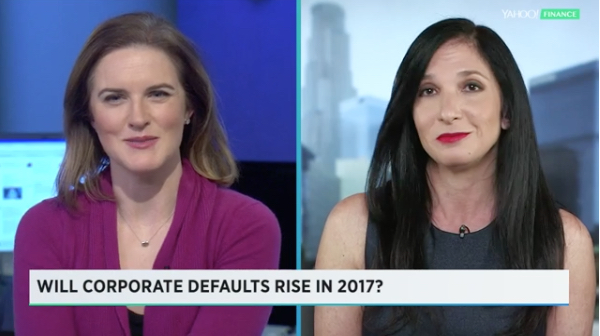 Nomi Prins is the best selling author of All the Presidents’ Bankers and is currently working on her latest book, The Artisans of Money.  Prins is a former Managing Director at Goldman Sachs and worked at an array of the most influential Wall Street banks.  She continues to be a strong advocate for a modern Glass-Steagall Act and breaking up  big bank institutions that pose a threat to the global economy.

When asked about the outlook for the Fed, growth projections, and whether the U.S central bank will have to get ahead of inflation she responded, “We have had a price inflation, in terms of the cost of living, but we haven’t had inflation in terms of the areas that the Fed actually measures. What was interesting about when the Federal Reserve raised rates in December, which had been done a year earlier in December as well, was that they projected last year (after examining what they’re looking at for forecasts based in growth and the economy) four rate hikes, we got one. This year they have only projected three. In effect the status on their own projections is actually more accommodative than it was the year before.”

“In the year before the markets opened up in January with a lot of falls. That was when we saw other central banks around the world, in particular the Bank of Japan and the European Central Bank, come in and reduce their rates to equate all of the costs of money globally back at zero. This was done to balance against the Fed’s hike.” 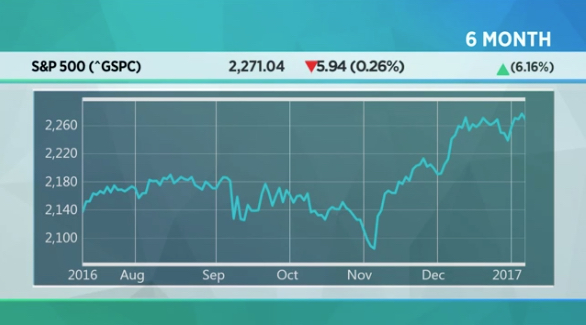 Switching from central bank policy to advising people to remove themselves from financial institutions Prins’ remarked, “ (People must be prepared) In the event of a separate financial crisis of any kind. There are issues that have still not been cleaned up in the financial sector, that is built on codependency between banks, and we could see a lot more of what has happened in Cyprus and Venezuela come into core markets. This would require banks to “batten down the hatches” on the liquidity they give to their customers, particularly if they are concerned about liquidity or credit problems.

“Corporate defaults are rising and occurring in the markets to which they lend. In that event, it is better to have more cash out of accounts that are effectively receiving zero interest rates, or close to zero, anyways. They could use that to buy hard assets, to pay down certain debts and to maintain as more liquid as individuals in terms of money on hand, as opposed to money in a bank.”

The Yahoo Finance host then asked why she saw the trend of corporate defaults continuing in 2017, “First, last year was a bad year. It was 40% worse than it had been the year before. So we are inching up toward the number of medium and longer term corporate defaults that we had during the worst year of the crisis.”

She went on to remark, “that will continue, not least because of where oil prices are. Oil streams from a lot of what caused, and is still causing, some of these defaults. In the instance that Rex Tillerson is to become Secretary of State, he holds a policy to drill and increase supply. That is not necessarily going to impact the price of oil, which may continue to hurt that segment of the market, and other outlying sectors that rely on corporate defaults.”

“The trajectory for 2017 is likely to continue, and if the U.S dollar stays the strong and rates stay where they are, where the Fed doesn’t increase interest rates – we will be looking at international defaults.  These international corporate defaults have also been increasing, while countries have to pay higher costs of their dollars.”

To catch the full interview with Nomi Prins on Yahoo Finance covering greater corporate defaults in store for 2017 and what is on her financial road map, Click Here.