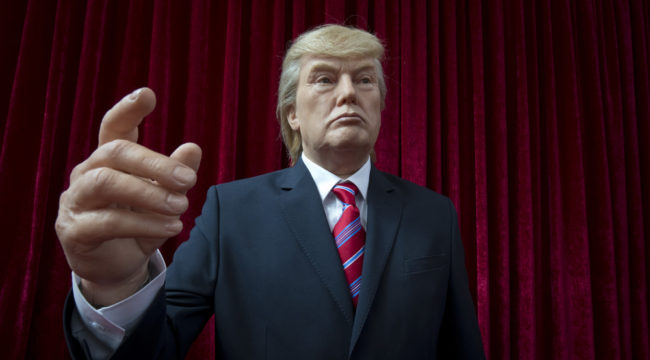 Have the Neocons Gotten to Trump?

The Donald’s emerging incapacity for even a semblance of normal governance might as well be called a Gong Show, and one that only get crazier by the day.

Take the most recent so-called gas attack in Syria and the Trump Administration’s seeming 180 pivot within just seven days.

This reversal is typical of the Donald and at the heart of why he will never govern effectively.

Just last weekend, for example, he began arguing publicly that it was his idea to pull the Obamacare repeal and replace bill. Actually, it was his inner circle, lead by Steve Bannon, who marched up to Capitol Hill on Thursday night and decreed that all negotiations and tweaking were over and that there should be an up or down vote on Friday afternoon, ready or not.

As far as I can tell, the Donald relented only at the last minute Friday afternoon when Speaker Ryan got down on one knee in the Oval Office to beg Trump’s agreement to pull a bill that was going down by 40-50 votes or more.

What I’m saying is that whirling dervish cannot lead or make anything happen amidst the checks and balances ridden contraption that the founders created. And the interest groups have wrapped their money-spewing tentacles all around both ends of Pennsylvania Avenue.

So the Syrian spectacle is just par for the course.

Last week Trump’s Secretary of State properly announced that “regime change” in Syria is over and that the Assad government can stay.

After all, in the scale of things the threat of the murderous Sunni jihadists — whether ISIS, Nusra Front or a dozen more like minded butchers — is infinitely more serious than the harsh, despotic regime of Bashar Assad.

Whether he goes or stays is none of America’s business, of course, but he did attain power through constitutionally valid means and does maintain a secular state that includes numerous minorities including Christians in addition to his own Alawite (Shiite) tribe.

Even Trump’s hawkish, foreign policy-illiterate ambassador to the U.N. was seemingly on board. Said former South Carolina governor and ex-bookkeeper for her mother’s mail order business, Nikki Haley:

You pick and choose your battles and when we’re looking at this, it’s about changing up priorities and our priority is no longer to sit there and focus on getting Assad out…

Do we think he’s a hindrance? Yes. Are we going to sit there and focus on getting him out? No…

We can’t necessarily focus on Assad the way that the previous administration did… Our priority is to really look at how do we get things done, who do we need to work with to really make a difference for the people in Syria.

So do you think the increasingly imperiled jihadist rebels in Syria might have one more go at the old “false flag” routine to change the tide of events?

That is, like the one they pulled off back in August 2013 and blamed on Assad, when the independent evidence, including an in-depth investigation by the intrepid Seymour Hersh, points overwhelmingly to jihadi terrorists funded by Saudi Prince Bandar.

Then again, in light of its freshly announced hands-off policy you might have thought the Trump Administration would take a few days to investigate in order to get the facts straight and assess culpability?

At least not if you are one of the neocon NeverTrump moles who have proliferated in the Donald’s administration. I refer, of course, Nikki Haley, who turned on a dime, exhibiting no compunction whatsoever about reading straight from the playbook that Obama’s hatchet lady, Samantha Powers, left behind when she vacated her U.N. office:

“There is an obvious truth here that must be spoken,” Haley continued. “The truth is that Assad, Russia and Iran have no interest in peace.”

“The illegitimate Syrian government, led by a man with no conscious, has committed untold atrocities against his people for more than six years.”

C’mon. This is getting so old that it stinks to high heaven. When Putin says jump, Assad asks how high?

So after winning worldwide plaudits in 2013 for persuading Assad to give up all his chemical weapons, and after ceremoniously assuring the world that they had been removed from Syria and destroyed, do ya think Putin would permit Assad to drop chemical weapons on a small village in the far northeast of Syria with no strategic importance on the day before the Syrian peace conference was to resume in Brussels?

The complete suspension of disbelief in Imperial Washington and among its servile press corps has reached a frightening extreme.

It’s enough to pop a blood vessel right here on the keyboard, so I’ll let journalist Michael Krieger have the honors:

This chemical attack just happened, how does he (Trump) know the Assad regime did this? Is it because the same deep state people who have been trying to sabotage him since day one told him so? Is he that stupid? Does it even make sense considering things were going pretty well for Assad in the conflict before this attack? No, it doesn’t, and many people are starting to ask these questions…

One of those questions is why the attack was denounced on anti-government social media nearly 24 hours before it happened, as was documented in a post on my Contra Corner blog yesterday.

Moreover, the alternative explanation that the horrific civilian deaths were an accidental result of the Syrian Air Force hitting an ammo and weapons assembly depot — which seems clear from the photographic evidence — at least merits an investigation.

That’s especially pertinent given the Russian claim that the destroyed depot contained chemical shells of the very kind being used against U..S and Iraqi troops in Mosul.

But apropos the CNBC knuckleheads who expect a massive stimulus injection from Washington, you really have to wonder about what kind of drugs they smoking down there in the canyons of Wall Street.

What kind of blind faith could actually expect the utterly incoherent and floundering Trump Administration — one that can’t or won’t smell this kind of giant skunk in the woodpile stood up by the Deep State and its media allies — could possibly make the American economy great again.

In a word, it’s in an irreversible shambles, starting with the Goldman Sachs contingent of Gary Cohn and Steven Mnuchin, who are the purported leaders of the vaunted Trump Stimulus. These gentlemen are clueless about policy, Washington processes and GOP politics — because neither have ever been Republicans or evidence the slightest interest in public policy or political philosophy.

Nay, they are just windfall beneficiaries of the Bubble Finance era who desire to “give back” an amorphous something that is utterly irrelevant to the crisis at hand. If the Great Disrupter needs help in his slated mission, these two could not be more suited to the task.

Indeed, if their former colleagues skulking the canyons of Wall Street had any sense, they would short the both of them until the cows come home.