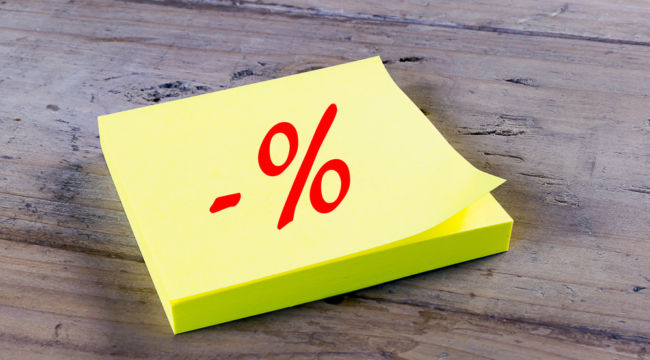 It is as inevitable as tomorrow’s sunrise — or a politician’s lie.

Yes, we can already observe the celestial bodies veering into alignment… as if guided by the unseen hands of the conspiring gods:

Negative interest rates are coming to these United States. Depend on it.

It is almost certainly the first of several shavings ahead.

How deeply will rates run before scraping bottom?

The calculation involves delicate intricacies we claim no competence to determine.

But we are confident they will plumb the deepest deeps of possibility.

And no man is an island, as wrote poet John Donne. Nor is the United States an island.

Soon or late, negative rates will swim the ocean… and break upon these pristine shores.

Even the moistureless, cataracted and half-blind eyes of Alan Greenspan can spot them coming:

You’re seeing it pretty much throughout the world. It’s only a matter of time before it’s more in the United States.

And now the American president is standing upon the beach, facing out and holding up a beacon of light…

“[The Fed] should get our interest rates down to ZERO, or less.”

The president has previously styled himself a “low-interest-rate guy.” Is he now a negative interest rate guy?

This morning’s ECB rate cut naturally reminded Mr. Trump of his own central bank’s failings — by his lights at least.

He took the occasion to dig his thumb in Jerome Powell’s eye, and twist plenty hard:

European Central Bank, acting quickly, Cuts Rates 10 Basis Points. They are trying, and succeeding, in depreciating the Euro against the VERY strong Dollar, hurting U.S. exports…. And the Fed sits, and sits, and sits.

Not only did the ECB cut rates today. It further announced it is having another go at quantitative easing…

The ECB Comes Out With All Guns Blazing

Beginning in November, it will purchase 20 billion euros ($22 billion) of bonds each and every month.

“For as long as necessary,” in the bank’s own telling.

Just so. And “as long as necessary” can be quite a stretch of time.

The eurozone’s core inflation rate runs under half the ECB’s 2% target.

And years and years of previous ECB quantitative easing failed to rouse the snoozing European economy — which presently verges upon a slumbering recession.

As reports our Nomi Prins:

Eurozone economic growth during the second quarter of 2019 was just half what it was during the first quarter. One major reason is that Germany’s economy contracted by 0.1% during the quarter. Trade activity has also declined. Recent Eurostat data indicate that the eurozone’s GDP grew by just 0.2% in the second quarter, compared with 0.4% in the first. That’s given the backdrop of Brexit uncertainty and global trade wars.

More drops in German industrial orders for July were reported last week, and have increased the possibility of a recession for the third quarter… Trade slowed during the quarter as well; imports grew less than in the first quarter and exports were flat after a 0.9% growth in the previous quarter.

Given the success of previous QE, here is when you can expect upcoming QE to end — in our judicious and exacting estimate:

Only then will the upcoming bout of QE end. It will accomplish little else but inflating existing asset bubbles.

But put these concerns to one side for the moment.

How Long Until the Federal Reserve Is Back to QE?

These days the world’s major central banks are bound together hand and foot.

How long can the ECB go at QE before the Federal Reserve goes into its own?

The United States economy runs ahead of Europe’s — and much of the world’s. But it merely walks tall among the dwarves.

Second-quarter U.S. GDP growth came in at 2%. But the Federal Reserve’s New York command center has downgraded its Q3 forecast from 1.8%… to 1.5%.

Even the chronically optimistic Atlanta Fed’s GDPNow estimate has third-quarter growth at 1.9%.

What about the fourth quarter?

David Rosenberg, chief economist at investment firm Gluskin Sheff has his binoculars out:

I‘ve been in the business for 35 years, and I don’t remember a time where uncertainty was at such an extreme level — and that covers a lot of nail-biting periods. The U.S. economy is going to slow down perceptibly. I would suggest no growth in the fourth quarter. People are going to be surprised by it. It will either be recession or stagnation.

The Federal Reserve will be on hand with additional rate cuts — and yes, quantitative easing before long.

That is when central banks will lose all remaining rags of credibility.

And that is why we expect the next recession cure — disaster, that is — will not be monetary.

It will be fiscal.

Get Ready for Modern Monetary Theory

The cries will go out…

“QE for Wall Street did nothing for the economy. The time for QE for Main Street has come.”

The authorities will take to their helicopters, hover over Main… and begin shoveling money out the side.

The throngs below will haul it all in. They will proceed to go spreeing through the stores. The resulting delirium will give the economy a wild jolt.

That is the theory… as far as it runs.

It in part explains the loudening shouts for Modern Monetary Theory (MMT).

Its drummers claim it can invigorate the wilting American economy.

They further claim it can fund ambitious social programs — all without raids upon the taxpayer.

And if interest rates are shackled down, without blasting the deficit. The printing press will supply the money.

But as we have argued prior, MMT is the eternal quest for the free lunch… water into wine… something for nothing.

And that world has no existence.

MMT would likely yield a gorgeous inflation. But the economic growth it promises… would be a promise broken.

It will join the broken promise of monetary policy.

But not until we are treated to negative interest rates, more quantitative easing… and whatever remaining articles the central banks hold in their trick bags.