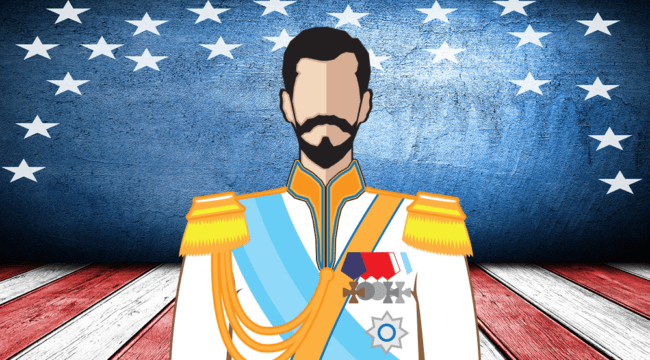 This we know because The New York Times — the Newspaper of Record — informs us it does.

Subversive conspiracies are amok. The internet is a sewer of disinformation…

In the past year alone, we have seen conspiracy theorists cause Covid-19 vaccine delays, sabotage a wildfire response and engineer a false election fraud narrative. We have also seen that if left unchecked, networked conspiracy theories and online disinformation campaigns can lead to offline violence, as they did during last month’s deadly Capitol riot…

Democracy itself dangles in the balance:

Unless the Biden administration treats conspiracy theories and disinformation as the urgent threats they are, our parallel universes will only drift further apart, and the potential for violent unrest and civic dysfunction will only grow.

As toxic chemicals poison a body, conspiracies and disinformation poison a democracy.

And so the reality crisis requires a reality czar… to flush the demon toxins that poison American democracy. Mr. Roose:

Several experts I spoke with recommended that the Biden administration put together a cross-agency task force to tackle disinformation and domestic extremism, which would be led by something like a “reality czar.”

This Roose fellow concedes a reality czar “sounds a little dystopian.” He hears the shade of George Orwell razzing him.

The very thought of it tortures him. But the nation is down with a dire disorder — a reality crisis.

They will revoke his czarship once the crisis blows through… as wartime powers are lifted once the war winds blow through.

Here is why we need him today:

The government’s approach to disinformation and domestic extremism is scattered. It lacks direction… focus… thrust.

It is a dull blade. A reality czar must therefore sharpen the point:

Right now, these experts said, the federal government’s response to disinformation and domestic extremism is haphazard and spread across multiple agencies, and there’s a lot of unnecessary overlap.

Do you question the experts?

The Daily Reckoning is heart and soul for reality. Each day we face reality with unflinching stoicism… and a stiff top lip.

Thus we throw in for a reality czar.

Too many Americans harbor deluded and fantastical beliefs. They must be shaken by the shoulders… set to rights… and returned to their senses.

You may believe it or you may not believe it… but many among us reject these bedrock facts:

That stocks — like redwoods — can grow to the sky…

That the Federal Reserve exerts little gravity upon the stock market.

That negative interest rates are positives.

Again — there are primitives among us who reject these obvious realities. As well deny the nose upon the face, you say.

Yet nothing goes home. These are impenetrable hunks of granite.

They may even deny the obvious fact that Washington axed the cherry tree… or that spacemen constructed the pyramids of Giza.

But horror succeeds horror. For example, these fantasists further deny the truths that:

Deficits do not matter…

That gold is a relic truly barbarous…

That prosperity springs from the printing press, that money and wealth are identical twins, to have money is to have wealth.

Can you believe the dullards? Should they mention the hyperinflations of Venezuela or Weimar Germany, please turn a deaf ear.

What is more, they deny that rising consumer prices are economically healthful…

That the individual is a dunce, yet 300 million dunces glued together are Einstein. That is, there are dolts among us who fail to perceive democracy’s obvious genius.

We could continue. But mercy forbids it. You have had enough.

But lo, a shaft of sunlight penetrates the gloom. Reality may prevail yet…

The “Protecting Americans From Dangerous Algorithms Act” was introduced in October.

No greater menace exists than dangerous algorithms. The desperately needed legislation would, in Mr. Roose’s telling:

Remove large tech platforms’ legal immunity for violent or violence-inciting content that their feed-ranking and recommendation systems amplified, while preserving their immunity for other user-generated content.

Thus you would be protected from dangerous algorithms. With God’s grace, this legislation will clear all hurdles.

But the legislative process is lengthy. Tangled. Fraught. The nation cannot wait. It needs its reality czar immediately.

The question next arises: Who should bear the title?

We can immediately eliminate Mr. John Kerry from consideration. He is occupied czaring the climate.

We are spoiled for choice. Yet we trust President Biden will tap the right man’s shoulder.

Much is at stake.