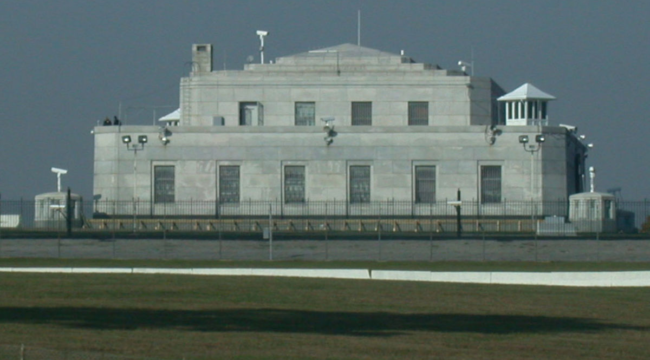 Mystery of the Fort Knox Gold

Fort Knox is where dottering old Uncle Samuel allegedly stashes half his gold — some 4,582 metric tons, by rights.

Mr. Mnuchin became only the third Treasury secretary in history to inspect the Fort Knox gold… and the first since 1948.

“I assume the gold is still there,” Mnuchin quipped upon his arrival. “It would really be quite a movie if we walked in and there was no gold.”

No doubt it would.

Monday was also the first time outside visitors were allowed since Congress members inspected the vaults in 1974.

But why the visit? And why now?

Mr. Mnuchin has never shown great interest in the Midas metal — to the best of our knowledge.

Perhaps Mr. Mnuchin was trying to hook a movie script?

Not everyone is convinced the gold is in Fort Knox.

Many believe the government has sold it over the years… secretly.

Some even speculate that the Fort Knox “gold” wears false whiskers — that it’s mostly tungsten bars jacketed in golden veneer.

It was a juiceless pursuit.

‘Of course the gold is there. Do you question the full faith and credit of the United States government?’

Dr. Paul’s bill received no sponsors… and died in its crib.

No one’s taken actual inventory of the gold since 1986.

The vaults were sealed shut that year — literally.

The Treasury’s inspector general inspects the seals every year.

Our agents assure us they haven’t been tampered with.

But for the first time since 1986, the seals were broken Monday… and the vaults thrown open.

What did Mr. Mnuchin and his Inspector Clouseaus find inside?

“The gold is safe,” announced the Treasury secretary, post-inspection.

“All I will say is that it is freakishly well secured,” he further assured the American people.

We’ll have to accept him at his word. He provided no supporting evidence.

But again, why the visit… and why now?

We can only speculate, of course.

But a potential debt ceiling crisis hovers over Washington…

The federal government runs out of cash Sept. 29. It can’t borrow any more unless Congress raises the debt ceiling.

That means no money to keep the government in funds.

Given Washington’s current… dysfunction, a deal seems a chancy thing.

To prove the cupboards are fully stocked against hungry times… and that bills will be paid.

What reassures more than 4,582 metric tons of gold?

But what else can we do?