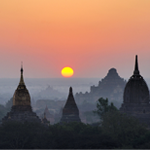 I handed the cab driver a $10 bill. He held it with two fingers, as if he were holding a dead mouse by the tail, and looked at it doubtfully.

“Sir, this one is…” he paused, searching for the right words, “too old.”

And so began a little game played throughout Myanmar. The Myanmarese are very particular about the appearance of the US currency they accept.

I’ve been in Myanmar since last Tuesday. I spent the first few days in Yangon. I’m traveling with my friend Lawrence Mackhoul of Leopard Capital. We left Myanmar with no set itinerary. We would just go by whatever means seemed best at the time — plane, boat, train or bus. We’d book our hotels at the counter when we arrived. We’d let the wind take us where it might, so to speak. We had a few spots we knew we wanted to hit, such as Mandalay and Bagan, and we had some meetings we’d arrange as we went. But otherwise, we’d be flexible.

Between us, we started with about $3,000 in cash. There are no ATMs, and we knew that credit cards are nearly worthless in this country. You have to pay cash for everything, even hotels and airfare. (One hotel did take credit cards, for a 5% transaction fee. They sent the information to Laos, of all places, for processing.) We also knew that the people of Myanmar like clean US bills. But their pickiness on this last point quickly had us worried we might run out of money.

We had bills rejected because of small tears or tiny ink spots or small pen marks. We had money rejected because the crease in the center was too great. Most absurd of all was when Lawrence tried to change his hundreds at a hotel desk and they rejected his perfectly crisp hundred dollar bills because they had “CB” in the serial number.

Lawrence stood there at the counter with a small pile of hundreds as they rejected each one. It seems the whole stack had “CB” in the serial number.

When asked why the “CB” mattered, we got a long answer that didn’t make much sense to us. Something about how the US sanctions make certain money impossible to exchange.

I went to the bank before I left home to get cash. As luck would have it, my banker is from Myanmar and goes there every year. She carefully went through my stack of hundreds and fifties. She did a good job too. None of the money I got from her has been rejected.

We found, however, that not everyone in the country is so well trained. We started to keep separate envelopes of “bad money.” This was money that was rejected once. Sometimes, more than once. But we found we were able to pawn off this money here and there.

The Myanmar currency is the kyat — which sounds like “chat” when people here say it. About 800 of them will buy you a dollar.

But it is the US dollar, despite all the problems, that remains a king among peasants. Despite, say, the Canadian dollar’s better performance against the dollar over the last decade or so, you can’t go to Burma and buy an airline ticket or pay for a hotel room with Canadian dollars.

At some point, the US dollar will lose its prime seat at the center of global commerce. And when it does, it won’t matter how clean your dollar bills are. People who don’t have to take them won’t take them.

That won’t happen until there is some kind of competitor. Looking at the world’s paper monies, though, is like looking through a mangy kennel of flea-bitten dogs. The best alternative is the one everyone used to accept for goods and services the world over. The alternative is gold. Maybe we won’t live to see a day where you can buy groceries with gold. But gold’s place as a store of wealth will remain, as it has for millennia.

In the 19th century and earlier, gold leaf was a popular money in Myanmar. It was easily divisible and easy to carry. While in Mandalay, I visited a shop that made gold leaf by hand.

So far, I’ve been to Yangon, Mandalay, Bagan and Ngapali. I’ll have more notes to share about these places when I get a chance to write them up. I also have some amazing pictures that will give you a sense of the place. But my Internet connection is not great. I can send and receive emails OK, but anything beyond that is impossible or painfully slow.

My general impression of the country so far is not what I expected. I expected that 50 years of relative isolation would’ve left a pretty desperate and decrepit country. I expected something more like the look and smell of India, with all the awful poverty and filth that you see traveling through Indian cities.

I found a place much more prosperous looking than official GDP figures and the like would indicate. Traveling here shows you how stupid US sanctions are, too. It just meant that the Myanmarese cozied up more with the Chinese, who imposed no such sanctions. Nor did Thailand, which remains a big trading partner (and gets about 20% of its natural gas from Myanmar). Nor did India. The only thing US sanctions did (and continue to do) is handcuff US businesses from tapping into this market.

As far as investment ideas go, I have a strong sense that this is a market where there must be a great opportunity somewhere. In the big-picture sense, the upside for Myanmar is clear.

People best grasp emerging markets by analogy. You find another market with broad similarities and/or some historical parity that has since widened. Then you think about what happens when the other market catches up. Mongolia, for example, could be the next Kazakhstan. This gives the boom in Mongolia some context, some tangible upside. It makes the upside plain because you see how far Mongolia has to go — in terms of real estate prices, incomes, etc.

In Myanmar, the analogy is neighboring Thailand. Even a move halfway to where Thailand is would be huge for Myanmar. This upside has investors excited.

But the particulars of investing are harder. It is easy to like a market, harder to find the winning opportunity. Or as Lawrence likes to point out, you can lose a fortune in a booming market and make a bundle in a weak one.

Prices have already adjusted quickly here. A taste: A studio apartment in Yangon in a less-than-average-quality building goes for $1,500 per month. Real estate prices have moved big-time already. There is no “Growth Group” here, like there is in Mongolia. The one listed property stock, Yoma, is very expensive, in my view. More on all this soon.

All is to say, I am still searching for the right idea here. I still have some crisp hundreds left. And there is always something over the horizon that makes me want to have a look. Until the money runs out, I’ll keep exploring. Stay tuned…

Chris Mayer,
for The Daily Reckoning