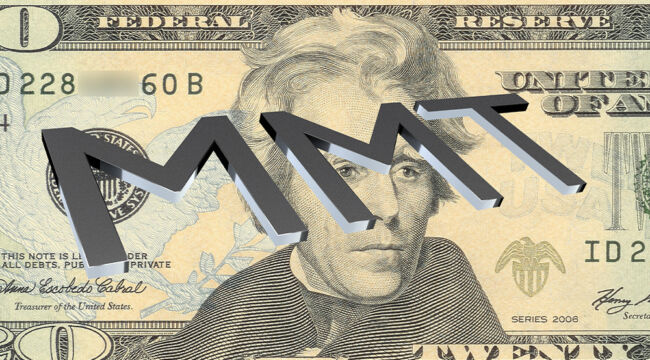 MMT is the most potentially damaging economic doctrine I have ever encountered, with the exception of communism.

Let’s begin with the idea that the Fed and Treasury should be merged in practice so that the Fed will monetize any amount of spending or borrowing the Treasury wants.

The reason markets have any confidence at all in the Fed is precisely because they are perceived as independent of congressional spending plans. MMT takes this confidence for granted and assumes the Fed can just crank up the printing press whenever the Treasury likes.

But, as soon as this kind of coordinated effort appears, markets will lose confidence, inflation expectations will soar and interest rates will skyrocket. The plan would collapse before it really began. This is exactly the type of adaptive behavior by investors and markets that MMT academics do not understand.

MMT says that a currency issuer such as the U.S. can never go broke because it can simply print money to pay off the debt (provided the borrowings are in the same currency as the printed money). This may be true in some narrow, literal sense, but it does not mean investors have to wait around for the trainwreck.

The evidence is strong that debt-to-GDP ratios above 90% are a major headwind for growth. Today that ratio is 130% and heading higher. More borrowing does not produce growth; it simply makes the debt problem worse.

At some point, investors abandon the dollar for alternatives, such as land, oil, gold, silver, or alternative assets. Interest rates rise sharply, which only increases the deficit. The fact that the U.S. can print the money to pay the debt is irrelevant if the money itself is being repudiated.

Something like this happened in 1978 when the U.S. Treasury issued bonds denominated in Swiss Francs and West German Deutschmark because investors did not want exposure to U.S. dollars.

The MMT claim that U.S. citizens cannot repudiate the dollar because they need it to pay taxes is also nonsense. Nothing is easier than the legal avoidance of taxes.

For example, take any one of Silicon Valley’s tech billionaires. A company founder, such as Mark Zuckerberg of Facebook or Larry Page of Google, can issue shares tax-free. After years of hard work and success, that stock may be worth $100 billion.

How much tax do you owe? The answer is zero. As long as you do not sell the stock, you do not owe any tax no matter how much the stock goes up in value.

Not everyone is a co-founder of Google, but the analysis is no different if you’re just an everyday investor with 100 shares. As long as you don’t sell the stock, you don’t owe any tax. Americans who contribute funds to 401(k)s or IRAs also avoid taxes on those amounts until they take distributions, which can be decades later.

The list of tax avoidance methods goes on. I was formerly International Tax Counsel to Citi, so I know exactly how the game is played. Only an academic sitting in a faculty lounge would believe that taxes force anyone to use any particular currency. Once the currency becomes debased, citizens will drop it like a hot rock.

Who Needs the Bond Market?

Another baseless claim of MMT is that government bonds are not needed to finance government spending. The Treasury can just spend what it wants by ordering the Fed to send funds to suppliers and contractors.

In fact, the government bond market is the benchmark for every fixed income market in the world. Interest rates on government bonds are a critical signal of whether government policies are working (or not), whether inflation is gaining a foothold, and whether monetary policy is too tight or too loose.

The existence of a liquid government bond market signals that private investors regard the government as creditworthy. The idea that the Treasury market is an unnecessary frill shows how out of touch the MMT academics are and how little monetary history they have absorbed.

But if the dollar becomes dysfunctional, as has happened with many currencies in the past, people abandon it for a better substitute.

Gresham’s Law, “bad money drives out good,” is an explicit recognition that citizens are always ready to dump one type of money and hoard another when they are being shortchanged by the former. So, just because the Treasury spends money, it does not mean citizens have any confidence in the money being spent.

What About the Banks?

But, banks are the intermediaries between the government and individuals and businesses. Banks create money just as surely as the Fed by making loans. That money comes out of thin air in a manner similar to Fed printing in the conduct of open market operations.

The Treasury may be the creator of the dollar, but they are not the sole issuer of the dollar. The dollar is continually issued by both the Fed and the commercial banks without involving the Treasury.

Money is issued by various financial intermediaries in various forms. The dollars in our wallets and purses are liabilities of the Federal Reserve System. (Read the fine print on a twenty-dollar bill, and you’ll see the words “Federal Reserve Note.” The Fed is the issuer, and a note is a liability).

It is true that the Treasury borrows money, receives taxes and spends money. But it’s just another user of money, not the sole source. MMT’s understanding is exactly backward.

The Role of Taxes

Perhaps the most pernicious idea from the MMT crowd is that taxes have nothing to do with spending. MMT says government can just spend what it wants. The purpose of taxes is not to balance the budget or even pay for anything. Taxes exist solely to cool down inflation and redistribute income from rich to poor.

If taxes are just another monetary safety valve (to reduce inflation) or a redistributionist tool, there is no reason for any American to support any level of taxation. Central banks have other ways to cool inflation, such as raising rates.

The idea that the tax code is nothing more than a cattle prod to fight inflation is exactly the kind of mindlessness one expects from academics whose business or real-world experience is practically nil.

This view of the tax code treats citizens like Pavlov’s dogs. We’re not Pavlov’s dogs. We understand the monetary and tax systems better than any MMT proponent because we live with them every day.

The Future of MMT

MMT will fail and cause great economic hardship in its wake. The issue for investors is to discern how and when it will fail.

Investors should expect the following sequence: continuing deflation or disinflation in the short-run, accelerating inflation in late 2021, then out-of-control inflation by mid-2022.

The short-run winners will be cash and Treasury notes. The winners during the inflationary stages will be gold, silver, residential real estate, and commodities. Stocks will perform well during the early stages of inflation, but they will crash badly once the dual impact of high inflation and high interest rates puts the economy in a new recession.

It’s not too soon to invest in inflation hedges. They tend to be more forward-looking than stocks, so they will move higher ahead of the actual inflation. Oil, silver and real estate are already showing signs of life.

Gold is facing headwinds right now because of higher real rates. When inflation kicks in, even high nominal rates will be negative in real terms because of inflation. That’s when gold (and gold stocks) will skyrocket. The current price level for gold is an excellent entry point.

Investors may not be able to stop MMT, but they are not helpless. Once you understand the damage MMT will cause, you can prepare accordingly.