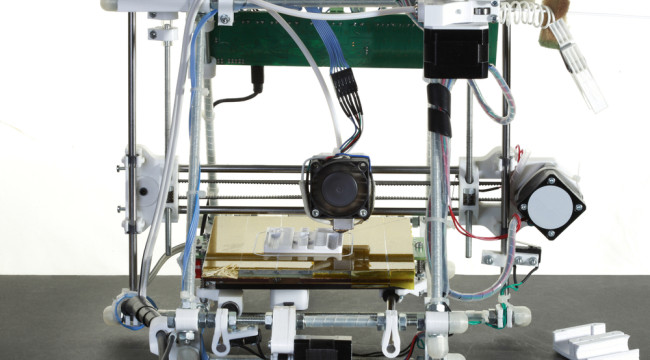 It’s possible. Even a guy in the tiny, impoverished African country of Togo has done it.

For someone living in a low-tech society like 33-year old Kodjo Afate Gnikou, spending $800 for a desktop printer is a little steep. So Afate constructed his own working printer from junk, mostly spare computer, scanner and inkjet printer parts he found in a local dump. It’s believed to be the world’s first 3-D printer made from e-waste.

The printer cost Afate about $100 to make, mostly because he had to buy a new motor. It is lovely, functional and can make a few basic objects. He crowdfunded the project on the French-language site Ulule.

Afate has high hopes for his new technology. “My dream is to give young people hope and to show that Africa too has its place on the global market when it comes to technology,” he said. He even plans on developing his printer for use on future missions to Mars.

Not everyone is so enthused about 3-D printers, of course. Back here in the U.S., Sen. Leland Yee (D-CA) is calling for laws that would track the 3-D printers with background checks, mandatory serial numbers and a registration process.

Later, there will assuredly be a printing tax. And routine inspections. Maybe even licensing to limit the number of people permitted to have such a dangerous technology. This conversation will become commonplace in American prisons:

“I made a plastic tea cup… without a license.”

With motivated tinkerers like Afate out there able to build parts from scrap, we wish the regulators the best of luck. They’re going to need it.

Check out the video, here:

P.S. To subscribe and get our best analysis on some of the most exciting new investment opportunities around the globe, click here.