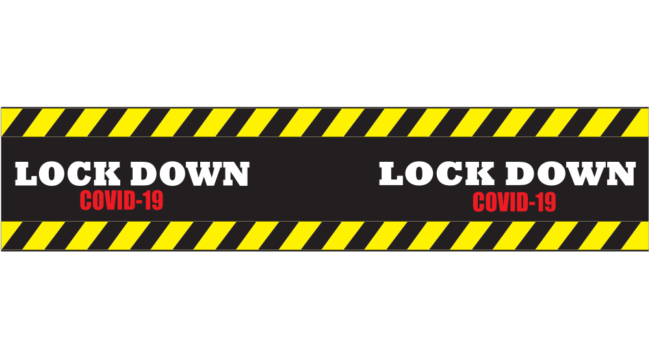 This we have the authority of one Los Angeles Times columnist — Mr. Michael Hiltzik by name.

Here is the clear evidence he cites:

An Italian team found that lockdowns start to reduce the number of COVID infections about 10 days after they start, and keep reducing the case rate for as long as 20 days following initiation.

French researchers, in a paper published in January, compared the experience in countries that imposed stay-at-home orders early in the pandemic and lifted the restrictions gradually — New Zealand, France, Spain, Germany, the Netherlands, Italy and Britain — to that of Sweden, which imposed no lockdown, and the U.S., which had (and still has) a patchwork of state policies often involving late orders followed by abrupt and premature lifting.

What were the results?

The first group saw rapid reductions in infections and a rapid economic recovery, compared to the second. “Early-onset lockdown with gradual deconfinement allowed shortening the SARS-CoV-2 epidemic and reducing contaminations,” the researchers concluded. “Lockdown should be considered as an effective public health intervention to halt epidemic progression.”

Just so. But is the evidence truly clear that COVID lockdowns saved lives?

…government actions such as border closures, full lockdowns, and a high rate of COVID-19 testing were not associated with statistically significant reductions in the number of critical cases or overall mortality.

Stringency of the measures settled to fight pandemia, including lockdown, did not appear to be linked with death rate.

What did researchers from Tel Aviv University determine?

We would have expected to see fewer Covid-19 fatalities in countries with a tighter lockdown, but the data reveals that this is not the case.

In conclusion, here is data journalist Elaine He — a she — writing in Bloomberg:

Some — above all Italy and Spain — enforced prolonged and strict lockdowns after infections took off. Others — especially Sweden — preferred a much more relaxed approach. Portugal and Greece chose to close down while cases were relatively low. France and the U.K. took longer before deciding to impose the most restrictive measures.

But… there’s little correlation between the severity of a nation’s restrictions and whether it managed to curb excess fatalities — a measure that looks at the overall number of deaths compared with normal trends.

We know little about respiratory viruses  — we wish we knew even less.

But it appears the evidence is far from clear that “COVID lockdowns saved lives.”

UCLA researchers, meanwhile, estimated that reductions in movement resulting from stay-at-home orders reduced transmission in the hardest-hit communities, such as Seattle, New York, San Francisco and Los Angeles by 50% or more.

But how do these UCLA researchers know the true figure?

We assigned our minions a heavy research of the scientific literature. From them we learn:

The early tests used to indicate infection often gave off fake alarms. They revealed the presence of the virus… when subsequent testing overturned the verdict.

But if tests botch the figures badly, how do researchers know the true transmission rate?

In addition: An infection does not equal an illness. Many are infected without their slightest awareness.

The virus might run like the devil through a schoolyard. Many youth would catch the virus — yet few would scarcely catch a sniffle.

The evidence also demonstrates that adults rarely catch the bug from the young.

The evidence further demonstrates symptom-free persons do not spread the virus. Do we talk out of our hat? No, we speak by the book…

Scientists from the Huazhong University of Science and Technology in Wuhan, China — birthplace of the virus — concluded:

Of nearly 10 million persons sampled in the Wuhan vicinity, no cases of asymptomatic spread were discovered.

That is, the symptom-free do not poison others with the virus.

But we are in generous, expansive spirits today. Let us assume lockdowns did in fact slash the transmission rate.

Yet what about the human miseries lockdowns inflicted? How many succumbed to ailments otherwise survivable… but who were denied treatment because hospitals consecrated themselves to treating the virus?

And what of all the auto-homicides… overdruggings…  and related “deaths of despair” produced by lockdowns?

There was a sharp decline in visits to emergency rooms and an increase in fatal heart attacks due to failure to receive prompt treatment. Many fewer people were screened for cancer. Social isolation contributed to excess deaths from dementia and Alzheimer’s. Researchers predicted that the social and economic upheaval would lead to tens of thousands of “deaths of despair” from drug overdoses, alcoholism, and suicide.

As unemployment surged and mental-health and substance-abuse treatment programs were interrupted, the reported levels of anxiety, depression, and suicidal thoughts increased dramatically, as did alcohol sales and fatal drug overdoses.

The number of people killed last year in motor-vehicle accidents in the United States rose to the highest level in more than a decade, even though Americans did significantly less driving than in 2019. It was the steepest annual increase in the fatality rate per mile traveled in nearly a century, apparently due to more substance abuse and more high-speed driving on empty roads.

How many lives may lockdowns have claimed last year?

The CDC counted about 345,000 deaths last year in which Covid-19 was the “underlying cause.” Even if you add the deaths in which the virus was a “contributing cause,” bringing the total to nearly 380,000, that accounts for only three-quarters of the excess mortality. Given that the total number of excess deaths, by the CDC’s calculation, was about 510,000 last year, that leaves more than 130,000 excess deaths from other causes.

How many of those 130,000 people in America were killed by lockdowns? No one knows, but the number is surely large, and the toll will keep growing this year and beyond.

Mr. Hilzik mentions these unfortunates not at all. They are dead nonetheless. Many more will likely join them over the rainbow in the years ahead. City Journal:

The United States will experience more than 1 million excess deaths in the United States during the next two decades as a result of the massive “unemployment shock” last year, according to a team of researchers from Johns Hopkins and Duke, who analyzed the effects of past recessions on mortality.

Again, Mr. Hiltzik does not register the dead-to-be.

But here is his most staggering claim: “COVID lockdowns saved lives without harming economies.”

Is this fellow not aware that last year witnessed the greatest economic cataclysm since the Great Depression?

That thousands and thousands of businesses shuttered their doors… and that millions and millions of Americans were thrown from their jobs?

He is aware of it, yes. But he believes he holds an ace card up his shirtsleeve.

That is, he does not hold lockdowns responsible. He attributes it rather to individual prudence.

… there’s very little evidence that lockdowns themselves damaged local economies more than individual behavior that would have happened anyway, lockdowns or not. Nor is there much evidence that lifting lockdowns produced a faster recovery.

Those who have studied the course of the pandemic in the U.S. and Europe understand why the lockdowns have less economic impact than one might expect. The reason is that people made their own choices to stay at home or to patronize only businesses where they felt relatively safe.

As Austan Goolsbee and Chad Syversen of the University of Chicago said of their study of the economic slump during the pandemic, “The vast majority of the decline was due to consumers choosing of their own volition to avoid commercial activity.”

In short, it wasn’t government policy that kept people home. It was fear.

Perhaps the fellow is correct. But let us draw a red herring across his lovely arguments…

He initially claims that lockdowns saved lives. He later credits “individual behavior that would have happened anyway, lockdowns or not.”

Thus we depart with this one question:

If it wasn’t lockdowns that kept people home… but fear… why does he pound his drum so loudly for lockdowns?