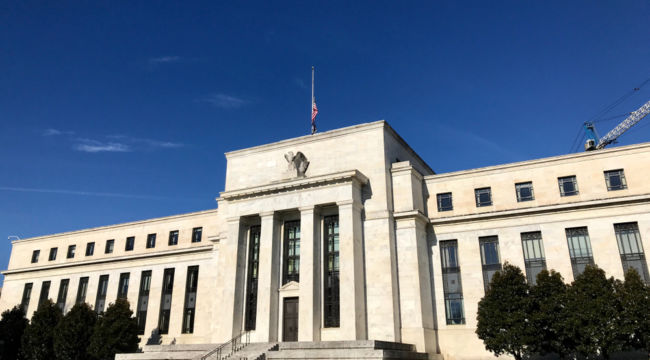 All eyes are again on the Federal Reserve, as everyone understands that the Fed is the market — the stock market, the bond market, the art market, the housing market, etc.

All markets have been driven higher by one force: central bank money creation and distribution to the financial sector of financiers and corporations, the richest of the rich.

What few seem to grasp (because they’re paid not to?) is the Fed is powerless over what actually matters in a healthy economy:

1. The Fed is powerless to create productive, profitable ventures for capital to invest in. Productivity has gone nowhere during the Fed’s reign, while speculative profits leveraged by the Fed’s free money for financiers have soared.

2. The Fed is powerless to raise wages. Despite ginned-up claims that wages are finally rising 3% a year after a decade of stagnation, wages are still losing purchasing power once real-world inflation is factored in.

4. The Fed is powerless to stop the New Gilded Age consequences of their policies via the Cantillon Effect, where the rich benefit most from new money that enters the system: It’s not just how the money is created, but how it’s distributed.

Those who get the Fed’s nearly free money can use it to buy productive assets and pursue speculations such as stock buybacks, while everyone else who didn’t get a single dollar of the Fed’s trillions experiences a loss of purchasing power as the Fed’s new money expands the money supply without actually expanding the real economy.

The only power the Fed has is to incentivize profiteering via stock buybacks and speculations of the super-wealthy — the power, in other words, to create a New Gilded Age of obscene wealth inequality.

The Fed’s New Gilded Age is generating political blowback, and eventually the masses will awaken to the fact that the Fed is the enemy of the people because it is the sole enabler of the unproductive, parasitic, predatory corporate/insider class that’s skimmed something like 87% of all the “wealth” “created” by the Fed’s policies.

The Fed has created an economy in which capital has been stripped of low-risk yield. All capital must become gambling chips in the casino to earn a return, but gambling is intrinsically risky, and the asymmetry between the risk — rising — and the return — increasingly paltry — is setting the markets up for a fall the Fed is powerless to stop, and a political blowback to the Fed’s New Gilded Age that it is equally powerless to stop.

Markets that live by the Fed also die by the Fed. The Fed’s abject, pathetic powerlessness over what actually matters will be revealed in the years ahead, and everyone will look back on the decades in which the Fed was viewed as god-like as a form of mass delusion.

“The Financial Storm Clouds Are Gathering”

The “everything bubble” is not permanent. Gambling is risky, and the Fed has rigged the world’s largest casino to benefit its banking/financier/corporate cronies. But bubbles burst for reasons outside the control of the Fed, a reality that’s about to become undeniable.

The financial storm clouds are gathering, and no, I’m not talking about impeachment or the Fed and repo troubles — I’m talking about much more serious structural issues, issues that cannot possibly be fixed within the existing financial system.

Yes, I’m talking about the cost structure of our society: Earned income has stagnated while costs have soared, and households have filled the widening gap with debt they cannot afford to service once the long-delayed recession grabs the economy by the throat.

Everywhere we look, we find households, enterprises and local governments barely able to keep their heads above water — in the longest expansion in recent history. This is as good as it gets, and we’re only able to pay our bills by borrowing more, draining rainy-day funds or playing accounting tricks.

So what happens when earned income and tax revenues sag?

Households, enterprises and local governments will be unable to pay their bills, and borrowing more will become difficult as the financial markets awaken to the re-emergence of risk: as shocking as it may be in the era of central bank omnipotence, borrowers can still default and lenders can be destroyed by the resulting losses.

Two Features of the Era of Central Bank Omnipotence

The era of central bank oOmnipotence has been characterized by two things:

1. A disconnect between risk and return. Since “central banks have our backs,” risk has been vanquished, and since central banks socialize losses by bailing out corporations and banks who gambled and lost, then the financial oligarchs have been free to ignore risk since the Federal Reserve has implicitly guaranteed returns will always be secured by Fed backstops, market interventions, etc.

2. Costs have been ignored because “we’re all getting richer” via asset bubbles. Your health care insurance just doubled in a couple of years? Forget it, pal, that’s chump change compared to the big-time gains in the value of your house and 401(k) stock holdings. This is the wealth effect: Even as rising costs consume earned income, we ignore this financial erosion and borrow and spend more because we feel richer when we look at our home and stock valuations.

In other words, the wealth effect has been deployed to paper over the enormous structural gap between income and expenses. The wealth effect doesn’t just affect households: Rising real estate valuations have boosted local government tax revenues, and small businesses have been buoyed by the spending of the top 20%, who own 93% of the stocks owned by households and who have seen their homes soar in value.

But asset bubbles always pop, and once they do, the wealth effect reverses and people feel poorer as the values of their homes and portfolios decline. They borrow and spend less, and all the capital gains that boosted local tax revenues dry up, too.

We’re seeing an enormous asymmetry between stagnant income and rising costs, and of the “solution”: debt, and lots of it.

Wages stalled but costs haven’t, so people increasingly rent or finance what their parents might have owned outright. Median household income in the U.S. was $61,372 at the end of 2017, according to the Census Bureau.

When inflation is taken into account, that is just above the 1999 level. How households earning $61,000 can acquire cars costing half their gross income is a story of the financialization of the economy.

More accurately: Financialization is the result of the cost structure pulling away from our ability to pay our expenses with earned income. The only way to enable costs to continue soaring far above our ability to pay them is to financialize the economy, making debt the core mechanism to pay the bills and asset bubbles the core mechanism to create phantom collateral to support the skyrocketing debt.

The Price of the “Solution”

Here’s the problem with reducing the cost structure to levels we can actually afford: All the fat in our system is screaming that it’s bone. The slightest reductions trigger titanic lobbying by whatever group of insiders or vested interests will bear the brunt of the cuts.

This leaves politicians with one easy way out: borrow enough money to satisfy the demands of every constituency, every clique of insiders and every vested interest. Rather than realigning costs with our ability to pay, we’re going to use debt to keep all the constituencies happy.

The price of this “solution” — the undermining of the financial system — will eventually be paid in full to the detriment of everyone, including all the layers of productivity-killing fat that proclaimed themselves essential bone.