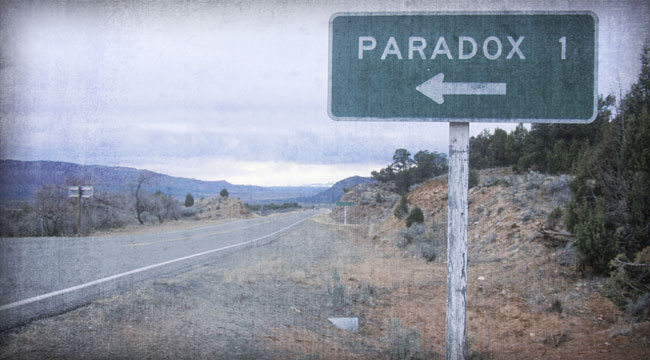 More is Less: The Paradox of Modern Economic Growth

[Ed. Note: Last week, Bill discussed the dangerous role of QE in a zombified economy. Today he expands on that idea, with a closer look at last week’s election results and a few more startling statistics in the U.S. economy. Read on…]

Voters don’t like the Republicans any better than they like the Democrats. But last week, Obama and the Dems were held responsible for the economy.

They got off easy. A hanging would have been more appropriate.

We have mentioned many times how median household income is now lower than it was when the 21st century began. The median household had $57,000 in income when the big ball came down in Times Square and closed out the 20th century. Today, it has $52,000.

After all, we live in the greatest economy man has ever created. More people have more money than ever before. So there’s plenty of capital to fund new enterprises.

Also, more people have college degrees. So there’s no shortage of educated people to fill office seats. And there are more scientists and engineers busy developing new drugs, new machines and new chemicals.

The economy should be exploding with growth, jobs and higher incomes for everyone.

And don’t forget there are more people than ever before whose explicit role in our economy is to make things better — more government agencies, more programs and more bureaucrats.

These “public” employees are all supposedly working full-time to improve the lot of the public. The Federal Reserve alone has 17,015 employees — most of them clerks or economists. Surely the combined efforts of so many smart people have resulted in a better economy?

Apparently not. Not only have incomes for most people fallen substantially, but also household debt has more than doubled since the beginning of the century. True, it is a little lower than it was in 2008. But it’s still more than $13 trillion.

And here’s something interesting. It used to be easy for a young person to enter the workforce and a pleasure for an older person to leave it. Now, it’s hard for the people who need jobs to get them… and hard for the geezers to give them up.

Since 1979, incomes of the top 1% have gone up three times. But when you get down to the average American, his income has gone down over the last 35 years. At the bottom — where you find the poorest 20% of the population — incomes have gone down an unbelievable 60%.

In 2000, 69% of Americans polled said they were satisfied with the ways things were going in the US. Now, only 23% say they are satisfied, which is hardly surprising in light of the figures we’ve just seen.

You’d think this kind of feedback would force economists and politicians to take notice. They might want to reconsider the policies of the last few decades.

But no. Celebrity economists such as Paul Krugman, Joseph Stiglitz and Larry Summers — as well as those running the Fed, the Treasury, the ECB, the Bank of Japan, the Bank of England and the IMF — all share the same activist economic model… one that was developed in the first half of the last century and elaborated over the last 60 years.

Taking their cue from Keynes, these economists believe a sluggish economy must suffer from a lack of demand. The logic goes that if they could just boost “demand,” growth would pick up… leading to more jobs and higher incomes.

But demand is a natural thing. It comes about when people have earned money… and when they would rather buy something with that money than save it.

The feds know they can’t fiddle this kind of demand. All they can do is create ersatz demand by suppressing interest rates and making it easier to borrow.

If that doesn’t work, they’re preparing the public for two further initiatives. The first came to light at the end of last month when the Bank of Japan — always a trendsetter — announced it would not only up its QE program to ¥80 trillion ($700 billion) a year, but also triple the amount of Japanese stock ETFs and REITs it is buying.

Japanese stock market speculators made money. It didn’t do any harm for our new “Trade of the Decade” either.

Like every other policy initiative over the last two decades, the Bank of Japan’s latest intervention made the rich richer. But don’t expect this new policy move to make much difference to the Japanese economy or its middle class. They need real economic improvement, not more “stimulus” claptrap.

If you could really stimulate by creating phony demand, Argentina and Zimbabwe would have two of the world’s leading economies.

And today, Harry Reid would still be Senate Majority Leader.

Ed. Note: Bill recently came by our Daily Reckoning headquarters for a candid interview on the dangers of central planning. As always, it was both entertaining and very insightful. Check it out for yourself, right here: