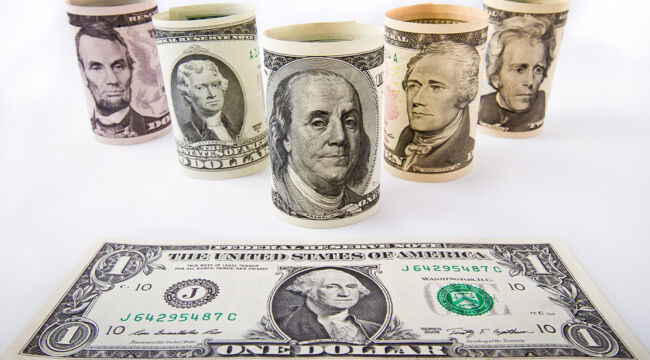 Poor Jerome Powell. This unlikely Atlas bears all the world’s weight upon his slender shoulders.

We hazard he ages one year for each torturous day he lives.

Anything he mumbles — or fails to mumble — can send markets careening.

Early yesterday afternoon, he mumbled something to The Wall Street Journal:

We expect that as the economy reopens and hopefully picks up, we will see inflation move up through base effects. That could create some upward pressure on prices… We want inflation expectations to be anchored at 2%. Inflation is running below 2% and has done so since the pandemic arrived… Today we’re still a long way from our goals of maximum employment and inflation averaging 2% over time.

Mr. Powell refers to “base effects.”

Last year’s inflation readings were stunted severely by lockups. This year’s numbers will appear rambunctiously high in comparison… as the economy reopens its doors.

But he considers these inflation figures fleeting, a distorted signal. The Federal Reserve will therefore exercise patience before training its cannons on inflation.

It will… in essence… permit inflation to run “hot.”

Within two hours of his gabbings, the Dow Jones had plunged some 700 points before steadying itself.

Why the horrific shrieks from the stock market — and the bond market?

Perhaps they do not necessarily subscribe to Mr. Powell’s theory of a transient inflation.

The longer the maturity, the greater the corrosion.

Recall, bond prices and bond yields are polar ends of a seesaw. One rises, the other falls. One falls, the other rises.

They may notice the $1.9 trillion “stimulus” bill presently awaiting passage. They may anticipate greater stimulus yet — Mr. Biden has proposed to spend $4 trillion by year’s end.

The Bloomberg Commodities Spot Index has bounced 67% since its 2020 lows. Commodities as a whole are the costliest since 2013.

Treasury yields remain historically subdued. But it is not merely the direction of travel that shook markets yesterday. It was the speed of travel.

I think what has spooked investors… is the speed with which we got from essentially just below 1% to 1.5% [in the 10-year Treasury yield] in the first two months of the year. Forecasts were certainly for getting to this level, and up to as high as 2%, by the end of the year, but it happened rather quickly.

Rising interest rates are murder for a market erected upon the sandy foundations of cheap debt.

When rates attain a certain height, the sand gives way. Down comes the building, Humpty Dumpty from his wall.

Markets had hoped Mr. Powell would announce a fresh policy yesterday… to bottle long-term rates… and stop the sand from shifting beneath them.

Both markets came away rolling their eyes, shaking their fists. Krishna Guha, director of global policy and central bank strategy at Evercore ISI:

The market was looking for some more reassurance and didn’t get it. [Fed officials] don’t appear particularly concerned about the current level of yields, which in both real and nominal terms is significantly higher than it was two weeks ago.

Here is what markets had hoped: Yesterday the fellow would announce a policy of “yield curve control.”

The Federal Reserve’s actual control over interest rates is limited.

It exerts tight control over the federal funds rate, or the overnight lending rate.

But it can only influence longer-term rates; nudge them, lean on them, blow against them.

It does not command them — to its everlasting frustration.

These longer-term rates unlock the grails of borrowing and consumption.

“Wait one minute,” you say. “Are you not describing quantitative easing? For years the Fed has been purchasing Treasuries to drive down yields. What’s so different about this yield curve control?”

An excellent question. Here is the answer you seek:

Under standard quantitative easing, the Federal Reserve commits to expend a fixed amount of “money” on Treasury purchasings — this many trillion, that many trillion.

Under yield curve control — however — the Federal Reserve targets a specific interest rate. It then purchases as many Treasuries as required to hammer yields to desired levels.

Assume, for example, the Federal Reserve has in mind 1% yields on the 10-year Treasury.

It would proceed to purchase 10-year Treasurys in bulk.

If x number of bond purchases fails to cap yields to 1%, then x+1 it will be. If x+1 does not put down the insurrection, then x+2 it will be… then x+3… the entire range from x to infinity if needed.

There you have yield control.

Explains one Sage Belz — and another David Wessel — they of the Brookings Institution:

In normal times, the Fed steers the economy by raising or lowering very short-term interest rates, such as the rate that banks earn on their overnight deposits. Under yield curve control (YCC), the Fed would target some longer-term rate and pledge to buy enough long-term bonds to keep the rate from rising above its target. This would be one way for the Fed to stimulate the economy if bringing short-term rates to zero isn’t enough.

And that is lovely because:

Lower interest rates on Treasury securities would feed through to lower interest rates on mortgages, car loans and corporate debt, as well as higher stock prices and a cheaper dollar. All these changes help encourage spending and investment by businesses and households. Recent research suggests that pinning medium-term rates to a low level once the federal funds rate hits zero would help the economy recover faster after a recession.

Stuck in a Pickle Jar

But Mr. Powell is content to sit upon his hands. He is evidently willing to let inflation run until 2% sustained — and “maximum employment.”

We hazard he will get the inflation before he gets the employment.

Would he let inflation run… and long-term rates rise… and markets tremble… as he sweats for the maximum employment that may not return for years?

The Fed has put themselves in a tough situation and the only way out is if inflation does not rise further and does not get to their 2% target. If it does, they have a problem because they will be afraid to confront it with higher rates if they remain so focused on employment.

Here then is irony: The inflation the Federal Reserve has sobbed and moaned for… could be its unraveling.

How will you choose, Mr. Powell?