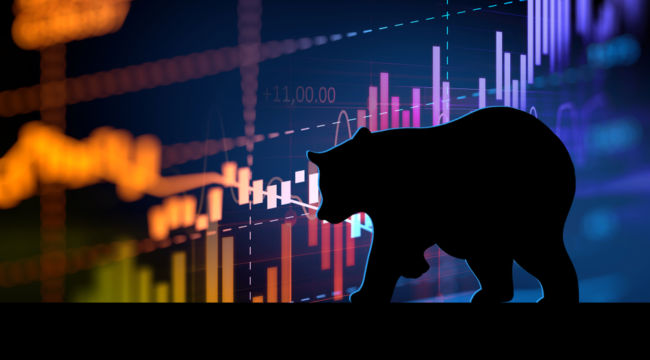 The stock market resumed today where it ended last week — with bears pressing the attack.

The Dow Jones broke below the 24,000 mark today for the first time since March.

Percentage wise, both S&P and Nasdaq were hard on its heels.

We have it on official word:

Not since 1980 have the three major indexes turned in such a woeful December.

By July 1981 — incidentally — the economy was sunk in recession.

Is today’s stock market giving off a recession warning for summer 2019?

This is the question we tackle today…

Let us first sit down with the facts…

In 1980, as today, the Federal Reserve was hard at the business of raising interest rates.

Of course the economic and monetary dynamic was vastly different in 1980.

So Volcker was battling to cage a tiger. And he had his whip and chair out…

Volcker drove the fed funds rate (the rate the Fed controls directly) to a tiger-taming 20% by late 1980.

In contrast — violent contrast — today’s inflation is as tame as a tabby.

Official inflation purrs at a domesticated 2% once monthly variations are ironed out.

There is simply no comparison between periods, you say.

Paul Volcker had a raging tiger by the tail. Jerome Powell has a kitten by the scruff.

But could it be that today’s interest rates are actually higher than 1980’s?

A lunatic question, you thunder, worthy of a bedlamite in an asylum.

Your objection is noted and entered into the record.

But we encourage you to get “real.”

Assume a nominal interest rate of 3%, for example.

Further assume that inflation runs to 1%.

Now consider the case before us…

Meantime, official consumer price inflation (again, the distinction is necessary) runs in the vicinity of 2%.

To discover today’s real interest rate, we once again subtract the inflation rate from the nominal rate.

What do we find?

We find that today’s real interest rate ranges between 0% and 0.25%.

Shocking — but there you are.

We must then conclude that nominal interest rates lack all meaning absent the inflation rate.

There is a reason why it is called the real interest rate.

A 10-year Treasury bond yielding 7% might reel you in, for example.

But what if inflation averaged 8% over the same period?

Inflation would gobble your 7% yield — and a bit more into the bargain.

You would require a 9% yield just to paddle ahead of inflation.

Meantime, you may balk at a 10-year Treasury bond yielding 3%.

A slender gain, yes. But you escape with your skin — and a slight surplus.

Your 3% 10-year Treasury, under these terms, infinitely bests a 7% Treasury if inflation is 8%.

Coming home, we must grapple with the fact that today’s real rate of interest exceeds 1980’s.

And rates will likely increase further when the Federal Reserve concludes its meeting on Wednesday.

Market odds of a rate hike presently rest at 76.6%.

Meantime, the stock market is turning in its worst December since 1980.

The economy was in recession by summer ’81.

Will today’s economy be in recession by summer 2019?

We do not pretend to know… but perhaps it’s time Jerome Powell got real.