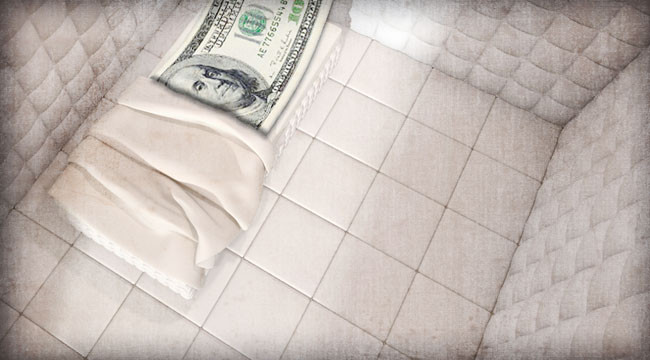 Janet Yellen: An Insane Choice for a Debt-Crazed Economy

Soon we won’t have Ben Bernanke to kick around anymore. Janet Yellen will head the Federal Reserve Bank.

What does it mean to you?

In an ideal world, it would mean nothing. You would shrug and go back to your morning coffee. Fed chairmen (and chairwomen), like referees, should not have such an impact on the game.

Competence in an economist is hard to measure, like knowing whether your auto mechanic is really any good.

But we don’t live in that world. So unfortunately, we have to at least consider what reckless thing the Fed might do next.

Perhaps we should back up and say what the Fed is all about. As President Obama said:

“A lot of people aren’t necessarily sure what the Federal Reserve does.”

Including, I might add, the president himself. If he did, he wouldn’t have said the outlandishly stupid thing he said next.

Thanks to Ben, Obama said, “more families are able to afford their own home; more small businesses are able to get loans to expand and hire workers; more folks can pay their mortgages and their car loans.”

Ben is responsible for all that, is he?

The press generally gushed over the choice. I chuckled as I canvassed the newspapers, the mouthpieces of the establishment. I thought of my old favorite, A.J. Liebling (1904-1963), who wrote some of the most insightful press criticism in the English language.

In his The Press (I recommend the expanded 1975 edition put together by his widow, Jean Stafford), Liebling wrote how newspapers “did not always, monolithically, without effort, like a piano falling down a stairwell, follow the official line…” But mostly, they did. They still do.

The New York Times was typical:

“President Obama was wise to nominate Janet Yellen, vice chairwoman of the Federal Reserve, to be the Fed’s next leader. As a deeply respected economist, she will bring two vital attributes to that role as a steward of the economy.”

The “deeply respected” bit was something that was often repeated. Not repeated was the fact that she didn’t see the last crisis — the biggest since the Great Depression — until it happened.

In her own words:

“For my own part, I did not see and did not appreciate what the risks were with securitization, the credit ratings agencies, the shadow banking system, the SIVs — I didn’t see any of that coming until it happened.”

I have no idea if she is competent. Competence in an economist is hard to measure, like knowing whether your auto mechanic is really any good.

As for vital attributes, the Times did get one right. “She represents continuity,” the Times wrote. That pretty much says it all. Janet Yellen is establishment all the way. She won’t wobble the canoe. She’s not a Paul Volcker coming in to break things up.

And that’s all you need to know about Yellen. She’s got the same playbook in her pocket as Bernanke. If anything, there are hints she’ll be even more aggressive in printing money than Bernanke.

The market rallies over silly things — even a “temporary” fix to the debt crisis gets a cheer, instead of groans…

And old Ben was pretty proficient in this area. Since he took over back in February 2006, the Fed’s securities holdings are up 365%, to $3.5 trillion. It bought all that with money it created out of nothing.

How big will the pile be when Yellen leaves?

My guess is it will be higher. Expect the easy money and distortions to continue. The stock market may continue to rise, as it has, with the size of the Fed’s holdings. This can’t end well, but the party between now and the end could be something.

Already, the markets have come unhinged.

I can’t help but drag out a quote from my well-thumbed Humble on Wall Street, by Martin Sosnoff. “The most reliable indicator of speculative excess is the new-issue market,” he wrote.

If you want to see the effects of an overindulged, careless market, look there. A good piece by Telis Demos in this morning’s Wall Street Journal highlighted this. Out of the 28 new technology stocks listed this year, 19 of them were money-losing firms. That’s the highest percentage of losers since 2007. Twitter is the next one up. It will go public and likely command a market value that starts with a “b.” Yet last year, it lost $79 million.

The rise of the profitless corporation is a curious phenomenon. Murray Stahl, the money manager at Horizon Kinetics (and co-manager of the Virtus Wealth Masters Fund, which I recommend) picked up on this idea in a note in August:

“It is hard to imagine that there are companies deemed successful that have little or no profit — and yet they exist. Examples include Salesforce.com, Workday, Netflix and even, to a great extent, Amazon.com.”

Amazon has been around seemingly forever. The market values the stock at $141 billion. It begs one to ask as Stahl does:

“If it is possible to be successful without generating profits [but] merely by growing revenues, why should not more companies engage in that approach?”

He leaves the question unanswered, but probably the executives at Twitter have wondered the same thing, if only privately.

On the other side of the spectrum, there are many companies enjoying profit margins at or near record highs. IBM, for example, has profit margins nearly twice as high as in 1999, right near the peak of the last tech bubble.

As Stahl points out, “There are many huge firms in the major stock indexes with enormous profit margins.” Among these are IBM, Microsoft, Oracle, Intel and Apple. So these stocks — and others — look cheap based on recent earnings. But those recent earnings come from reaping the rewards of high profit margins. There is a big risk that these will revert to something less heroic.

(This is why I’ve been careful to pick up stocks where profit margins are at historically low levels at the moment — such as banking or insurance. Reversion to some average is a force you want to harness for gains, not one you want to fight against.)

Point being we live in a weird, funhouse sort of market. Fed policy distorts everything, starting with its suppression of honest interest rates. The market rallies over silly things — even a “temporary” fix to the debt crisis gets a cheer, instead of groans — and no bad news keeps the market down for long.

All of this makes it a tough market to stay safe in, because you may lag behind awhile. I like to read the shareholder letters of a number of my value-minded friends and colleagues. Many are lagging the market this year because they don’t own the junk that’s leading the pack.

Robert Sanborn, who runs the Elkhorn Fund and is one of the laggards, reminisced about how this market reminds him of the 1990s. He lagged then too.

“I distinctly recall one partner of mine tell me that I would never ever ‘catch up’ to the relative performances of the highfliers that year… In the next three years, the Nasdaq dropped about 70%, and I had the best absolute and relative investing years of my life. Those heroes of the late ’90s all imploded and from point to point, suffered large and permanent losses in capital.”

I think the Yellen era may well follow a path like that. It’s a big party for a while, and then it isn’t.

Ed. Note: When the party starts winding down, you don’t want to be one of the stragglers left behind. Best to leave early, on a high note, while everyone else gets trashed. Chris Mayer has made it his mission to know when that’s going to happen, and in today’s Daily Reckoning email edition, he offered readers a way to access his most premium research. It’s just one of the perks of being a free subscriber to The Daily Reckoning. Sign up for The Daily Reckoning email edition, for FREE, right here, and start getting the whole story.