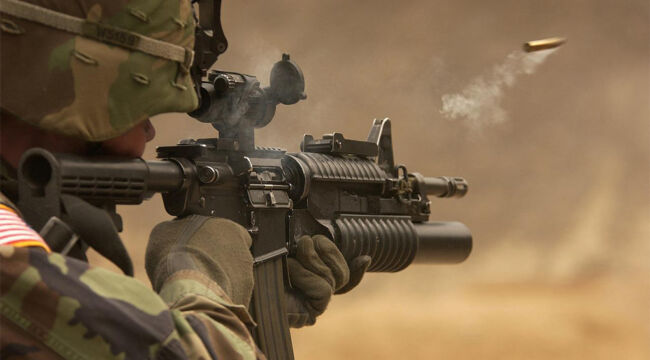 It seems that more and more commentators and political figures are calling for an increased U.S. role in Ukraine, even the deployment of ground troops.

For example, Sen. Chris Coons of Delaware recently argued, “We in Congress and the administration [must] come to a common position about when we are willing to go the next step and to send not just arms but troops to the aid in defense of Ukraine.”

Coons later walked back his comments, but he’s not the only one who’s argued for sending troops to Ukraine.

Gen. Philip Breedlove, former NATO supreme allied commander, has suggested that NATO should deploy troops “into western Ukraine to carry out humanitarian missions and to set up a forward arms supply base.”

Well, that’s fine, but setting up an arms supply base in western Ukraine drags us right into the middle of the conflict. Do they think Russia is going to just sit back and watch NATO arms pour in to help Ukrainians kill more Russians?

Russian missiles have already destroyed weapons supplied to Ukraine by the U.S. and its NATO allies. What happens if Russia attacks an arms supply base and kills a number of American soldiers?

The pressure would be to attack Russian forces in retaliation. The U.S. and Russia would then be on the escalation ladder (more on that below).

Meanwhile, retired Gen. Ben Hodges says, “It still does not feel like we are all-in to win. We have exaggerated the potential for a so-called World War III to the point that we’re making policy decisions based on an exaggerated fear.”

But maybe it’s not fear that’s keeping us out of direct involvement in Ukraine, but prudence.

These people are gambling that a conventional conflict with Russia wouldn’t escalate into nuclear war. And maybe they’re right. Maybe it wouldn’t. But is that a risk we’re willing to take?

Nuclear warfighting is not a topic that has been much discussed in the past 30-odd years since the fall of the Berlin Wall in 1989 and the dissolution of the Soviet Union in 1991.

It’s certainly not a topic that nonexperts want to think about because the implications are both horrific and existential. Still, no topic is more critical today.

The theories around nuclear warfighting were mostly developed in the 1950s and 1960s by scholars such as Herman Kahn, Henry Kissinger and Albert Wohlstetter.

I read their work beginning in the late 1960s as part of my studies in international relations and I continued to study the topic through graduate school and beyond.

But there’s one rule they all agreed on: Don’t go there.

The process by which nuclear war happens is called escalation. Two nuclear powers start out with a grievance of some kind. The grievance may be played out using proxy powers such as Vietnam in the 1960s and Afghanistan in the 2000s.

One side escalates the conflict by doing something unexpected or extreme. The other side does not stand still; they take an extreme retaliatory action. The first actor then retaliates to the retaliation and so on. Now we have a dynamic where two sides are climbing the escalation ladder.

Again, it’s important to emphasize that neither side really wants a nuclear war, but once they start climbing the ladder, it’s hard to stop. Eventually one side pushes the other so far that the only response is to use nuclear weapons.

At that point, you’re no longer just escalating; you’re at the brink of a nuclear launch.

Use It or Lose It

To make matters worse, the other side sensing that their opponent may go nuclear will be under pressure to go nuclear first in order to avoid being hit themselves. This then goes into another branch of theory involving first-strike, second-strike, counterforce and countervalue strategies, etc.

I don’t have to do a deep dive on these theories in order to make the point that a nuclear war doesn’t begin with a nuclear attack. It begins with small steps that spin out of control.

Because of the war in Ukraine, the world is closer to this apocalyptic state than at any time since the Cuban Missile Crisis in 1962. That doesn’t mean both sides would launch ICBMs at each other right out of the gate.

Russia has already warned that it may use tactical nuclear weapons. The U.S. and NATO seem to believe Russia is bluffing and it is therefore safe to continue escalating. Again, maybe that’s true, but maybe it isn’t.

Unlike the U.S., which regards any nuclear weapons deployment only as a last resort, Russian military doctrine is much more open to the use of tactical nuclear weapons on the battlefield.

And it’s believed that Russia has about 2,000 tactical nuclear weapons, while the U.S. has under 250. Given Russia’s conventional inferiority against the U.S. and NATO, it’s not surprising that Russia fields so many tactical nukes.

To be clear, I’m not predicting nuclear war. I’m simply pointing out the risks involved once both sides get on the escalation ladder toward nuclear war.

It’s easier to get on than to get off.

Meanwhile, there are credible reports that British special forces are in Ukraine instructing the Ukrainians in sabotage and other special operations tactics. Similar reports are circulating about U.S. and French special forces in Ukraine.

The U.S., U.K. and France are all members of NATO. If any of those troops are killed or confront Russia forces, it could be viewed as a war between Russia and NATO, which is tantamount to World War III.

Russia is investigating the claims. By itself, these special forces may seem like a small escalation. But it’s exactly the kind of action that can escalate into something far worse.

The White House would do well to study the same work that I learned in the late 1960s. Instead, it seems like no one is home at the White House. We’re playing with fire as the potential for escalation continues.

And unfortunately, so does the potential march toward a nuclear war we’re told not to worry about.

I don’t know about you, but I’m a little worried.