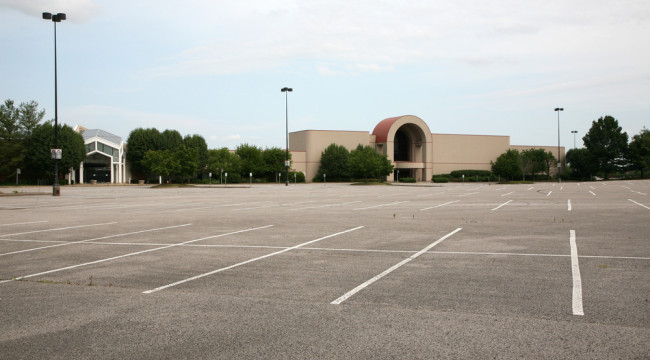 The Shanghai Composite plunged more than 6% – the biggest fall in three weeks.

Our research team in Beijing is downcast.

“Nobody here wants to hear about stocks,” they tell us.

And the junkiest – and riskiest – part of the U.S. bond market has taken a dive too.

Here’s that chart of the big U.S. junk bond ETF that Chris highlighted in yesterday’s Market Insight. It has completely rolled over this year… 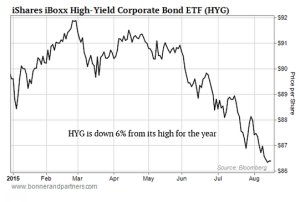 And according to Deutsche Bank’s David Bianco, earnings are actually falling when you exclude companies’ slick accounting adjustments to “smooth” their numbers.

The only thing left propping up Wall Street stocks, as we explained yesterday, is insider trading.

Recent sales figures from America’s retailers show how deep the rot has become.

Especially rotten are sales at America’s four largest mall retailers – Macy’s, Kohl’s, Sears, and JCPenney. Together, their sales are falling at a 10% rate per year… or four times faster than the fall in department store sales generally.

What is interesting about these four companies is that they have been among the most aggressive of the stock market manipulators.

Between 2005 and 2014, they earned a combined total of $13 billion. But their top execs spent $34 billion deceiving investors about the true value of their firms, by way of share buybacks, pocketing billions for themselves in the process. (More on how this works below…)

If you’re counting on the markets to reveal the right price for a stock, you may have a long wait.

To paraphrase Lord Keynes, the cronies can falsify the data longer than you can remain solvent.

The Fed rigs the bond market. The cronies rig the stock market.

Here is how it works…

The C-suite cronies buy shares of their own companies in the open market and then cancel them. This increases the earnings per share of the remaining shares, pushing up their value. In turn, this makes the cronies’ stock options more valuable… triggering big bonus payouts.

As Albert Edwards at SocGen has often observed, not only do buybacks increase at rich market valuations and dry up in depressed markets, they are also typically financed by issuing debt.

What drives buyback activity is not value, but the availability of cheap, speculative capital at points in the business cycle where profit margins are temporarily elevated and make the increased debt burden seem easy to handle.

The cronies wouldn’t be able to rig stock prices to the same extent without the feds’ ultra-low interest rates.

Putting the price of money below what 19th-century Swedish economist Knut Wicksell called the “natural rate” – the rate of return on capital – turns every number in capitalism into a lie.

Look what has happened to retail space…

There was no shortage of places to spend money. But in retail – as in dot-coms, houses, mortgage-backed derivatives, oil, and commodities – cheap financing makes overdoing it irresistible.

Retail space has doubled since 1990, even though household income fell. We now have about the same household buying power as the Germans… and four times as much retail space per person.

What are they going to do with all that space?

U.S. households are still wary of taking on debt. According to figures from Bloomberg, the level of overall household debt remains 6.5% below its peak of $12.7 trillion reached in the third quarter of 2008.

That leaves corporate America and Washington to keep the credit bubble inflated.

Only government and corporations are willing to keep pouring good money after bad, in other words. Small wonder. It’s not their money!

Yes, dear reader, consumers have pulled back. The median household income has fallen, in inflation-adjusted terms, since the 2008 financial crisis.

Without wage rises, households can’t increase spending – except by going further into debt. And they saw what happened to them the last time they did that.

So, that leaves the feds… and the corporate sector.

A gridlocked Washington doesn’t seem to be taking its responsibility very seriously. Deficits have gone down to just 2% of GDP. That’s equal only to about one-fifth of the 2009 fiscal stimulus package.

As for monetary stimulus, it’s gone way down, too. After expanding its balance sheet by about $4 trillion, the Fed’s QE is on hold. Of course, a fair amount of liquidity leaks in from Japan, Europe, and China… but not enough to keep this credit bubble fully inflated.

That leaves Wall Street running out of time… and money.

Risky corporate bond yields are rising… and stocks are beginning to roll over.

The cronies are taking advantage of the summer lull to rig the markets… but it might be the last time for this go-round.